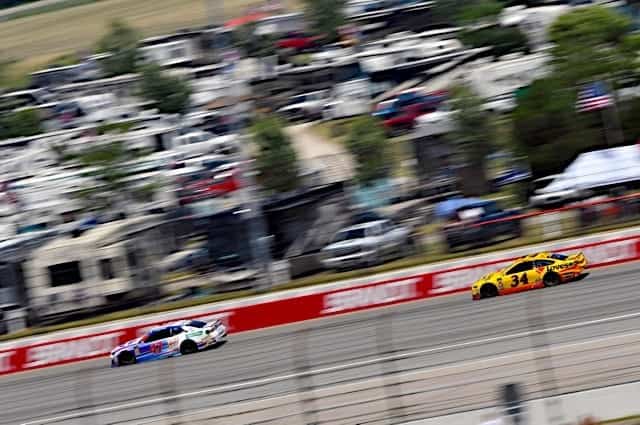 Though Chicagoland Speedway gave fans one stellar race up front, the day was actually on the calm side for the Monster Energy NASCAR Cup Series underdogs.

The Overton’s 400 was the first summer race for the speedway since 2010 and it proved to play some effect to how the 267-lapper played out for the drivers. Not only were the Cup guys racing but it was a triple-header weekend with XFINITY and Camping World Trucks also competing on the 1.5-mile track.

And all three were balmy. The Truckers got off easy with their night race Friday night, however, XFINITY and Cup had their ice bags ready with temperatures exceeding 90 degrees on pit road and more than 150 degrees inside the cars.

Surely, the fans were cooking in the stands as well but at least they had eye candy on the track, which was capped off with the best Kyle and Kyle Show yet between Kyle Busch and Kyle Larson for the win.

But where were the underdogs? Well, one played a portion in the late controversy with lapped traffic impeeding Busch’s lead but that was about it near the front. From there, Sunday was another struggle of a day for NASCAR’s small teams.

For the first time of 2018, Michael McDowell is the Frontstretch “Underdog of the Race” for Front Row Motorsports. That’s the positive. The negative is that it came from the 21st position, one lap off the pace.

And 21st-place finishes are nothing out of the ordinary for McDowell, who has finished there three of the last four races. Dating back further, top 20s have been tough to get, as the No. 34 has only two in the last 10 races.

However, in terms of Chicagoland, it was a career-best day. McDowell never finished better than 30th in his seven prior starts, so nearly cracking the top 20 Sunday may not have been so bad.

For only the third time this year, no underdogs hit the top 20. But when you look right outside that bubble, it’s an explosion of underdogs from 21st on back.

Behind McDowell was Chris Buescher, who came home 22nd for JTG Daugherty Racing. Darrell Wallace Jr. was a spot behind in 23rd while AJ Allmendinger was 24th. This plethora of small teams in this area continued to prove the true mid-field hump these teams battle each week. A top 20 is that split: Higher than that, you’ve had a good day. Lower than that, you’re wondering what happened.

Unfortunately for small teams, they’re scratching their heads this week.

Kasey Kahne was 27th for Leavine Family Racing. And while it seemed the No. 95 was starting to get its feet in line (scoring three top 20s in a four-race span in the month of May) the speed has fallen off a bit since, with only one top 20 in the last four races.

Ty Dillon is another small-team driver who has fallen off the pony in 2018. With only two top 20s all season, Sunday’s 28th-place run was another day worth forgetting. And it’s a surprise for many in the NASCAR garage. Germain Racing was looking onwards and upwards in 2017, earning their best average finish ever (20.7) and most lead-lap finishes in a season (20) heading into this season. But it has been one disappointment after another as we hit the halfway mark in four days in Daytona.

Matt DiBenedetto has had his high points this season with top 20s at short tracks, road courses and 1.5-mile tracks. Sunday wasn’t one of those days, however, as the Go Fas Racing No. 32 was 29th at the checkered flag.

Ross Chastain was 30th at the end and was that darn lapper that was mentioned earlier. The Premium Motorsports rookie was in a bumper match with Ricky Stenhouse Jr. as leader Kyle Busch closed in and it ended with Chastain returning the bumper to Stenhouse after Busch passed on by.

Gray Gaulding wasn’t quite near the spotlight as Chastain and finishing 31st for BK Racing. Reed Sorenson was 32nd for Premium while Kyle Weatherman was 33rd for StarCom Racing. For Weatherman, Sunday was his first start of 2018 and only the third of his Cup career. The 20-year-old pulled a surprise out of his hat on Saturday, out-qualifying veteran teammate Landon Cassill before finishing the race without significant incident.

David Ragan played pit strategy early with Front Row teammate McDowell, with the two Fords stretching the opening green-flag run on fuel. Unfortunately for Ragan, a broken ale brought the No. 38 to the garage early — and further issues with the transmission led to another garage stop. He still managed to finish the day in 38th while Timmy Hill dropped out on lap 185 in 39th spot.

A triple-header weekend saw XFINITY and Trucks share the spotlight at Chicagoland.

Starting with Trucks, Brett Moffitt simply did it again, earning his third win of 2018 with Hattori Racing Enterprises following a last-lap pass. Austin Hill tied his career-best outing in ninth while Austin Wayne Self tied his season-best run of 13th for Niece Motorsports.

For XFINITY, Chase Elliott scored his second top-10 finish for GMS Racing in 10th while Ross Chastain and Ryan Truex came home with top 15s in 13th and 15th, respectively.

Getting in the car after two weeks off. pic.twitter.com/srdqu1HwTo

My best finishes have been in this @KLOVERadio @DISupdates. Going to try at keep that going this weekend. We know @roushyates @FordPerformance bring the speed to SuperSpeedways. #MakeItCount pic.twitter.com/9YziodzXlI