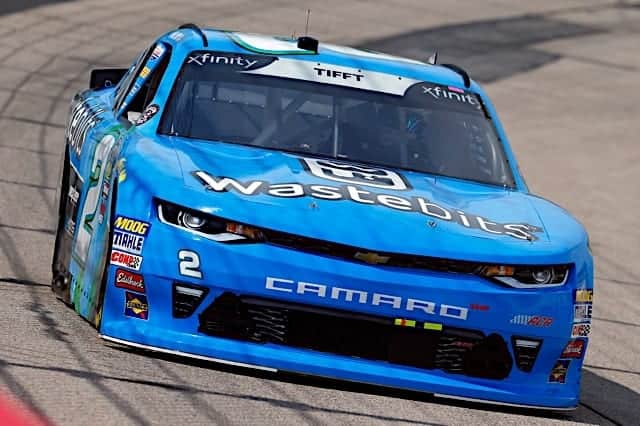 The first two years of Matt Tifft‘s NASCAR XFINITY Series career were filled with ups, downs and personal battles, but he’s found his happy place at Richard Childress Racing in 2018.

Tifft, 22, moved to RCR during the off-season, following his rookie year at Joe Gibbs Racing when he made the postseason. In 2017, the Ohio native had a pair of top-five finishes and 13 top 10s, seven of which came in the final eight races of the campaign.

Fast forward 15 races into the 2018 season, Tifft is on pace to break those career-highs with RCR.

“There has definitely been a lot of speed and potential,” Tifft told Frontstretch regarding 2018. “We’ve got a couple races that are probably hurting our point standings a little bit. You take that out of the year and we’ve been pretty good, just one step from where we need to be come playoff time.”

Through the opening 15 races of the season, Tifft has a best effort of fourth at Richmond Raceway, along with six additional top-10 finishes. Having led just one lap, at Dover International Speedway, he’s sizing up the competition to see where the No. 2 team needs to make improvements as they head toward the playoffs.

“My first goal was to run in the top 10 consistently, so I think we’ve got there,” he said. “The next goal is to run consistently in the top five. The [No.] 7 car right now is probably a benchmark of where we want to be running between third and fifth every week, and that’s where we need to run now before we make that jump.

“How we ran at Phoenix [ISM Raceway] and Richmond is how we need to run every week, and that’s kind of our next goal we need to get accomplished. If we get there, I feel like, this summer, that puts us in a good spot for the playoffs and allows us to be right there knocking on the door for a win.”

Tifft admitted that since making the transition to the Chevrolet camp, he’s leaned a lot on Daniel Hemric, who was a part of the Championship 4 at Homestead-Miami Speedway last year. RCR has a technical alliance with Kaulig Racing, where it provides the third-year team with chassis and equipment, which has also allowed Tifft to get familiar with veteran driver Ryan Truex. He’s also used Austin and Ty Dillon when they compete in the No. 3 car, and both are former winners in the series.

Having those drivers and having teammates has upped Tifft’s game.

“I didn’t have a full-time teammate last year, and that hurt me a good bit I think at times,” Tifft said. “I got some advice from those guys over there [Joe Gibbs Racing], but having someone in there every single week and at the meetings and stuff, it’s been really helpful because we’re doing it week in and week out.

“I think there has been a lot of collaboration between the teams at RCR and it’s big — that communication and open line there — someone is going to figure something out, and we’re not keeping secrets from each other.”

Comparing Tifft’s statistics from 2018 to this point of the season last year show he’s improved in most categories. Last year, he had just four top 10s in the opening 15 races, though he was eighth in the points, one position higher than where he’s currently ranked (ninth).

Tifft believes some of that is due to a pair of bad runs at the two restrictor plate tracks: Daytona International Speedway, 19th, and Talladega Superspeedway, 25th, while also having a 35th-place DNF at Bristol Motor Speedway. However, a change in scenery, personnel and equipment was needed for Tifft this year to take that next step as a driver.

“I thought it was the right move for me just as a fit for a driver and mentality over here,” Tifft mentioned. “I felt like I needed a fresh start as well, and they have given me a lot of confidence in me and trust in me, and it goes both ways on that. It’s been really refreshing and I’m enjoying this season.”

Though thankful for his time at Joe Gibbs Racing, competing for Richard Childress has helped him, as has it’s helped Brandon Jones, who replaced him in the No. 19 ride after spending two seasons in the RCR camp.

“Just getting a reset point I think was good, and I felt like it was the right step for me to move in a different direction to a different team was the right move for me,” Tifft said. “I went there, and they were talking about the direction they were going in and how they thought they could improve this year compared to last year, and they’ve done that. I hope I’ve helped in some ways, but I’ve been happy to see the performance they’ve had, and we haven’t gotten a win yet, but we’re knocking on the door.”

The series heads back to Daytona this weekend where Tifft has a best finish of 11th in four career starts at the World Center of Racing.