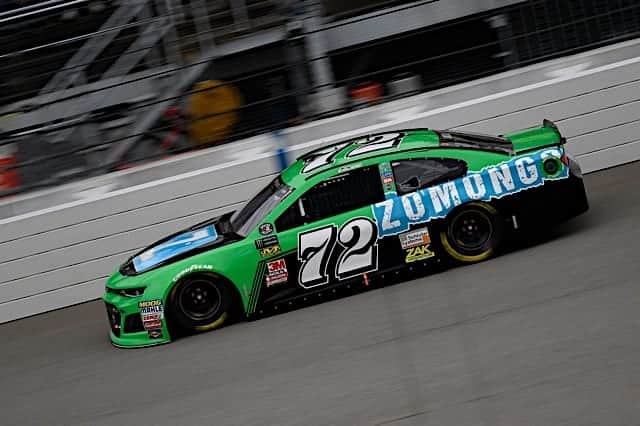 In the latest episode of the 2018 Frontstretch Podcast, we review an action-packed weekend of racing at Chicagoland Speedway with Dustin Albino, Mike Neff, Zach Catanzareti and Corey LaJoie, driver of the No. 72 TriStar Motorsports Chevrolet.

Kyle Busch took home his fifth checkered flag of the season on Sunday in the Windy City, but had to work for it in the final laps thanks to a closing Kyle Larson. Lapped traffic didn’t give the No. 18 car an inch with a few laps to go, and it allowed Larson to close in to battle for the win. On the final lap, Larson attempted a slide job in Turn 2, only to put Busch in the wall. With Turn 3 quickly approaching, the former series champion sent Larson spinning, en route to the victory.

While the two Kyles battled it out for the victory, it was familiar names rounding out the top five. Kevin Harvick, Martin Truex Jr. and Clint Bowyer, arguably the top five drivers in the Monster Energy NASCAR Cup Series this season, took home the top five spots. After having a great race from start to finish. Aric Almirola added his name to the mix by leading a career-high 70 laps yet finished 25th.

LaJoie, who re-entered the race with a handful of laps to go after a fire engulfed his dashboard, gives his take on why lapped traffic crossed the line by not letting Busch by. He also discusses who he thinks can challenge the “Big Three” going forward.

This weekend Fronstretch is holding a FanDuel contest for the Firecracker 400 at Daytona where the winner takes all. Ever want to visit the Tricky Triangle at Pocono Raceway and win hundreds of dollars in cash prizes? This is your chance. Jump in on the action at Fanduel.com/fromtstretch to have a shot at winning two tickets and two pit passes to the Gander Outdoors 400 at Pocono on July 29. You will be competing against many fantasy players, and quite possibly your favorite Frontstretch writer.

Rate, review and subscribe to the Frontstretch Podcast: iTunes