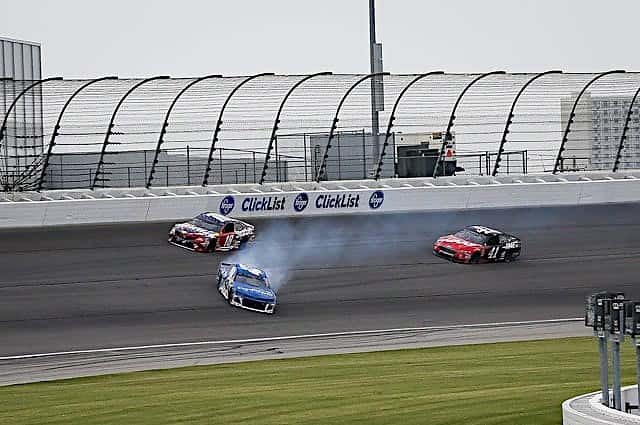 Sunday’s finish at Chicagoland Speedway between Kyle Busch and Kyle Larson has had everyone buzzing this week. Was this the best finish of 2018 thus far? And where do you rank it in terms of all-time NASCAR finishes?

Amy Henderson: It was probably the best finish of the year, mainly because so many of the finishes haven’t been that close.  Beyond that, though, it doesn’t even make my list of great finishes.  Had Kyle Busch tried to run Kyle Larson to the line clean, it might have been reminiscent of the finish at Darlington Speedway between Kurt Busch and Ricky Craven, but Busch intentionally turned Larson instead (you don’t get into a guy’s right rear with any other intent), and in the process denied fans an even more exciting finish. I don’t find the dump-and-run to be all that exciting (nor does it require the skill to execute that a real bump and run does).

Matt McLaughlin: The thing about getting fed nothing but stale bread and lukewarm gruel for years at a time is when you finally get a White Castle slider it tastes like prime rib. Yes, it was the best finish of this year, but in the annals of the sport’s history it’s a top-10-percenter, not a redefining moment. I just wish they’d been able to run that All-Star Race package to improve the finish.

Michael Massie: It was nowhere close to the best finish ever, but it was the best of the season so far and the best at a mile-and-a-half in a few years, at least. That finish still had the adrenaline flowing through my veins hours after it. The thing is, though, if you went to the local short tracks, you’d see drivers racing that hard and aggressively on nearly a weekly basis. It’s too bad that it’s a rarity in NASCAR these days.

Vito Pugliese: Was it the best finish of 2018? Of course! Was it one of the best finishes of all time? Not quite. Yes, everyone was pumped about Dale Earnhardt Jr. yelling, “SLIDE JOB!!!” from the rooftop at Chicagoland, and the saying will become a buzzword for the next four months, but all-time great finishes? Had Larson not made contact with Busch initially and they actually raced to the line, yes. Busch just drove into the back of him in the middle of Turn 3 and spun him out, hitting the wall in the process. Had Larson hung onto it (he almost did) or Kevin Harvick beat him by a bump to the line, then yeah, it would have made a most memorable list. Not a fan of dumping drivers for a win in the final turn. It’s lame and the type of controller-chucking tactics my buddy Chris would pull playing NASCAR 98 on PlayStation. Two things all the great finishes of all time have: a narrow margin of victory and both cars involved in any contact coming to the line for the win, not one sitting on the apron.

Dale Earnhardt Jr. made his highly anticipated television broadcasting debut this Sunday with NBC, with his heard-’round-the-world “SLIDE JOB!” going viral. What are some other iconic calls in NASCAR history?

Henderson: It’s kind of funny, because while trying to think of one, I came up with calls from other sports before I could think of a good NASCAR one other than Ned Jarrett calling his son Dale Jarrett’s win at Daytona International Speedway.  When I’m watching a race, I’m usually more focused on the event than the call, and I prefer to listen to the radio calls in the first place, which tend to be more subdued because radio doesn’t need to create drama.  I still struggle to think of another memorable NASCAR call.

McLaughlin: You’ve got to be pretty old to recall one-time NASCAR commentator (and Formula 1 champion) Jackie Stewart about busting a gasket calling a race at Charlotte Motor Speedway and hollering at the top of his lungs on the final lap, “And he’s out of petrol!” concerning race leader David Pearson. In fact, the Gray Fox had gotten on his brakes to force Richard Petty to pass him, knowing on the last lap in the era of the draft you wanted to be in second in Turn 4 so you could slingshot around to the checkers. Meanwhile most NASCAR fans were scratching their heads and wondering what petrol was.

Massie: Obviously the call to the greatest finish ever, Craven and Busch at Darlington, is what tops the chart. From Larry McReynolds yelling, “They touch, they touch,” to him and Darrell Waltrip shouting, “Craven got him,” multiple times, to the infamous, “Have you ever? No, I never,” exchange between Mike Joy and Waltrip, it was a special moment in racing history, and it happened when the FOX booth was in its prime.

Another unforgettable one was the 1979 Daytona 500. Ken Squier did a fantastic job of calling the wreck between Donnie Allison and Cale Yarborough on the last lap. Afterward, the cameramen were struggling to find new leader Petty, as there was a car in the field with a similar paint scheme. Squier repeatedly said, “The leaders are up in Turns 3 and 4,” until the cameras picked up Petty’s car. There will never be another Ken Squier, but FOX could use one to point out where the racing action is these days.

Pugliese: Many will cite Ken Squier’s 1979 call in the Daytona 500 between Yarborough, Allison, Petty and Waltrip, but the ones that always sticks with me are two Bob Jenkins calls. The first: his octave-climbing number at North Wilkesboro Speedway in 1989 as Ricky Rudd and Dale Earnhardt made contact in the final laps. The second is the 1993 Winston 500 finish at Talladega Superspeedway as Rusty Wallace went airborne off Earnhardt’s bumper coming across the finish line in one of the all-time crazy races in NASCAR history. The muted reaction from Benny Parsons and Ned Jarrett as the car came to rest was and still is poignant.

Aric Almirola won his first stage of his Monster Energy NASCAR Cup Series career on Sunday and looked to have a race-winning car before two loose wheels derailed his stellar afternoon. Will Almirola win a race this season in his first with Stewart-Haas Racing?

Henderson: Yes, along with Kurt Busch, to make the superfecta for Stewart-Haas.  The team is so strong across the board that it’s hard not to imagine all four with wins by November.  Aric Almirola has a win at Daytona, he’s always very good there and he’s coming off some decent momentum despite the pit mistakes.  That win might come sooner rather than later.

McLaughlin: Right now it seems hard to predict anyone, but Kevin Harvick, Kyle Busch, Martin Truex Jr. or Clint Bowyer will win a race this year — though given the vagaries of plate racing, it’s a buck dancer’s choice (my friends) this weekend. Overall, Almirola has yet to post a top five Cup result this season, and he’s managed seven top 10s in 17 races. You gotta learn to jump before you learn to fly. And please don’t let ZZ Whoever screw up Tom Petty and the Heartbreakers’ “Learning to Fly” as well.

Massie: Almirola could win this weekend. After all, he won this race four years ago. Almirola’s biggest problem is that he starts out fast but doesn’t keep up with the track the way that Harvick and Kyle Busch do. I could see him winning a race late this year once he and crew chief Johnny Klausmeier get on the same page.

Pugliese: Yes, and it will come this Saturday at Daytona. If you don’t have him on a fantasy team, you’re not trying very hard.

The circuit heads to Daytona International Speedway this weekend for the Coke Zero Sugar 400 on July 4 weekend (sort of). Being such an iconic race, what’s one lasting memory you have from the race?

Henderson: I’m no fan of restrictor plate races; most of them kind of blend together.  Still, Dale Earnhardt Jr.’s win in 2001 was a standout because it was so emotionally charged for everyone involved from the team to the fans.  It was a bit of closure after the tragedy there earlier in the year. There was also a great story about one of the first primetime Daytona summer races when the action was slowed by a red flag.  Terry and Bobby Labonte were both running well, and as the story goes, during the red flag they hatched a plan to switch cars for the remainder of the race.  The hype of the race being run during primetime and fear of sponsor repercussions if one of the brothers won in the wrong car put the kibosh on the plan, which is really a shame, because that kind of thing is the stuff of NASCAR legend.

McLaughlin: How is the Coke Zero Sugar 400 a tradition? It’s the first time the event has ever been run under that name. It’s amusing to watch announcers call it “the Coke Zero” and then realize they have to add in the sugar, which gets their infections all goofed up. Now, the Firecracker 400 is in fact a longstanding tradition. I guess the one everyone remembers is the ’01 event in which Dale Earnhardt Jr. edged out teammate Michael Waltrip in the first Cup event at the track since his famous father perished in a last-lap wreck. Some folks claim the finish was staged, but if you’re paying attention you realize NASCAR could screw up a one-car funeral in a two-stoplight town.

Massie: Nothing will ever top the emotions of the Dale Earnhardt Jr. win in 2001. A distant second was seeing Almirola put the No. 43 back in Victory Lane 30 years after Richard Petty won his 200th win at the same track and 15 years after the car’s last win by John Andretti. Another great moment was this:

On this day in 1776, we were the champs. @StenhouseJr is here to remind you.

Pugliese: I have two. The first is as a teenager on summer vacation, stumbling downstairs after awaking at 10:30 a.m. and turning on ESPN as the cars were getting ready to roll off the grid. It was so hot the race would get started well before noon before drivers — and fans — succumbed the oppressive heat and humidity. Drivers routinely needing relief would park it and let someone else take over as they slumped over the pit wall. The second was listening to call on MRN for the 1984 Firecracker 400 with my dad in our 1969 Plymouth Valiant as we headed to the auto parts store. Wide World of Sports wasn’t live with the coverage, and my dad as a lifelong Richard Petty fan was waiting on win No. 200. The result was a fist-pumping, deafening, “ALL RIGHT!!!!” as the No. 43 STP Pontiac edged out Yarborough’s No. 28 Hardee’s Monte Carlo SS to the caution flag that would ultimately end the race.

Davey joined the site prior to the 2017 season and currently serves as a multimedia editor and reporter. He authors the bi-weekly column "Fire on Fridays" and spearheads Frontstretchs video content. He's covered the ARCA Menards Series East and West extensively for NASCAR.com and currently serves as a production assistant for NBC Sports Washington.
@DaveyCenter
Previous Tech Talk: Tony Gibson & Daytona Downforce, Air Flow & Spoiler Angels
Next 4 Burning Questions: When Will It Be Cole Custer’s Time?