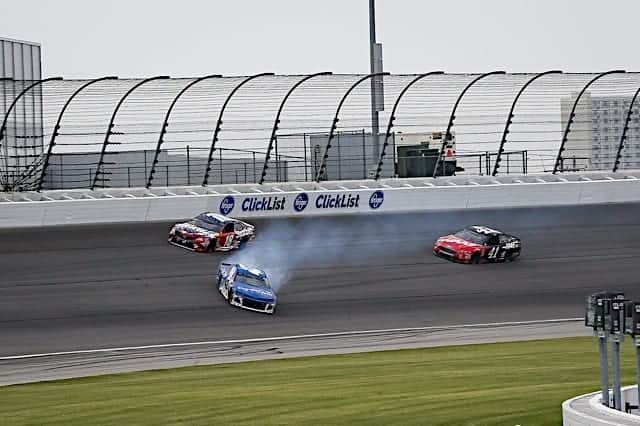 The Fourth of July gave many people a midweek summer respite, a chance for food, fun, family (however you consider it), and likely fireworks of some sort.  For those who are able to enjoy taking the rest of the week off, cheers. For everyone else whoʻs back at the grind, do what you can.

The Cup race this past weekend at Chicago did a good job of providing some material for this weekʻs Happiness Is.  With that in mind,

Happiness Is…Fireworks.  When was the last time that a Cup race brought about that kind of ending?  The best ones that come to mind involve Jimmie Johnson and Carl Edwards at Atlanta and Kansas.

The Slide Job is a delicate art and many of the best drivers arenʻt able to pull it off with aplomb.  Kyle Larsonʻs attempt to pull off the maneuver on Kyle Busch at Chicagoland was another of these ill-fated attempts, one full of moxie and self-belief but short on physics.

When Larson punched Busch into the wall, it changed the dynamic of the way the two were racing, changing it from being crafty and technical into one of bumper cars and the proverbial chrome horn.  That Busch went on to tap Larson out of the way, spinning him into the grass wasnʻt bad racing as much as it was a recognition of the change in tenor.

But seriously, how cool was that?  Finally, a mile-and-a-half track staged a wonderful finish, one that wasnʻt predicated on phantom cautions and late-race restarts, or overtime.  This finish was built upon the two best cars being driven by competitive drivers who both saw opportunities. That they exchanged thumbs-ups afterward was a sign of respect and of the show they had just given.  More of the same, please.

Happiness Is…Family Fracas.  It wouldnʻt be the Fourth if family didnʻt argue, right?  Any family dissension is usually brought on by someone holding some long-standing ill will toward someone over something stupid that really doesnʻt matter anyway.  This is about as apt a description as can be given toward how NASCAR fans reacted after Kyle Busch won the race last Sunday.

Busch is disliked for any number of confused reasons at this point.  He whines. Heʻs petulant. He doesnʻt know how to lose with grace. He drives a Toyota.  Heʻs arrogant. He called someone a name in the sixth grade and that was uncool. The list goes on.  Whatʻs funny is that Busch is just like almost every other driver. They all whine. Theyʻre all arrogant.  They donʻt all driver Toyotas but if youʻre still hung up on that then maybe living in a capitalistic country that sells out the welfare of its workers for gains under the auspices of development isnʻt for you.

Kyle Busch is derided for things he did years ago and for the chip that he carries on his shoulder and most of all, for winning.  That seems to be his greatest sin.

But a clap to all the fans who canʻt stand him or those who love and defend him.

For all the drops in viewing and attendance numbers, for all the problems that exist in the sport, which we all know are many, the passionate fans on all three sides of the equation let their voices be heard.  The vitriol directed at Busch was just as loud as the defenses and the third-party observers. Be angry that Busch won. Good deal. Too bad Larson couldnʻt pull off the Slide Job. Be happy Busch won. Or be that third party and celebrate that there was an ending to a race on a cookie cutter track that wasnʻt manufactured and was certainly worth watching and discussing.  It kind of makes up for Sonoma being so tame.

Happiness Is…Roots.  While American racers were doing their thing last weekend, Formula 1 held the second race of their Triple Header.  Much like the Cup race, it didnʻt disappoint – but for very different reasons. The opening laps, when much of the wheel-to-wheel action takes place, brought Lewis Hamilton to the front as polesitter Valtteri Bottas struggled, and also brought Kimi Raikkonen and Max Verstappen to the fore.

Thatʻs all well and good.  But the race results, of having both Mercedes bow out with mechanical failures, and seeing two Red Bulls on the podium, not only changed up the standings a bit but also showed that, perhaps, F1 races arenʻt as predictable as they may seem.  Having the dominant team finally show some weakness, especially after they showed the second half of their massive upgrades, Mercedes actually seem to be a bit vulnerable as this season is progressing.

Of course, that same story was sold last year when Mercedes and Ferrari closed in on the summer break with Sebastian Vettel leading the standings by one point.  Once the series resumed, Mercedes took over and eventually closed out the season handily. This coming race at Silverstone will be an important one for recognizing how they might trend.

Looks like this weekends race at Silverstone will set the tone for the rest of the year. Ferrari responding to Mercedes upgrades with a new floor, and who knows about Red Bull. But I suspect this track with its fast sweeping corners will favor Mercedes.

And since there is never a shortage of intrigue in F1 what about the tires. Toto Wolff has supposedly been lobbying for the new thinner tires to be run at all the remaining races. No surprise about that since they seem to favor the Mercedes which isn’t as kind to its rear tires as the Ferrari and Red Bull.

What CACA…was this insane post written before or after the “fun” at Ala Moana park?