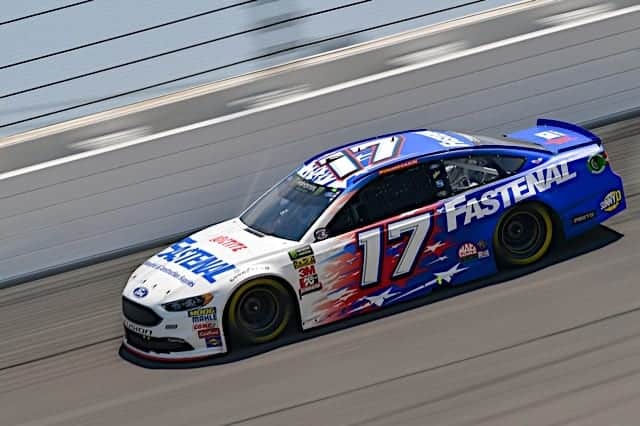 At this time last season, Ricky Stenhouse Jr. had a pair of victories at Talladega Superspeedway and Daytona International Speedway. This season, he’s fighting for a postseason berth.

Stenhouse, 30, has three top-10 finishes this season, and currently sits 17th on the playoff grid, 23 points behind Alex Bowman, who sits on the cut line with nine races to go in the regular season. However, the No. 17 team enters Daytona this weekend with confidence being the defending race winner.

“It’s a great opportunity for us,” he said of Daytona this weekend. “We’re still kind of battling there points-wise for 16th and that’s something that we’ve been focused on and have kind of slipped the last couple weeks even though we’ve probably had our better runs at the two tracks we’ve struggled at, but a win would go a long ways.”

As a whole, Roush Fenway Racing has just the three top 10s to its name this season. Jack Roush, owner of RFR, pulled Trevor Bayne out of the No. 6 car for select races, in steps 2003 series champion Matt Kenseth. The results were similar.

But for Stenhouse, a driver that typically gets the most of the RFR Fords, hasn’t finished in the top 15 since Pocono Raceway, which has led to some friction between driver and team.

“We’ve had some tough conversations these last few weeks,” Stenhouse said on Thursday at Daytona. “I think I’ve been pretty vocal in the shop and sometimes whether it be in an interview or on the radio probably when I shouldn’t, and I definitely need to respect all of our guys at the shop that are working hard and trying to provide new stuff for us.

“We just haven’t got that new stuff as quick as what we wanted.  I think last week I got a little frustrated hearing other teams bringing new cars to the track and kind of seeing their performance have an uptick and then some of those cars we’re racing to get in the playoffs, so that’s kind of where the frustration comes in.”

At one point last weekend at Chicagoland Speedway, Stenhouse admitted he told Roush he didn’t think the No. 17 team would finish inside the top 20 because of how the car handled in practice. He took the checkered flag in 16th.

However, once the new equipment makes its way to the racetrack, Stenhouse feels the team will be in a better position to make a run toward the playoffs.

“We’re working hard.  We’ve got some things in the works it’s just not here right now,” he metioned. “That’s a bummer. We’re hoping that we can get some new stuff soon… It needs to be now, but, like I said, the process of getting something new and deciding what path you’re going to go down to make the cars better and faster you sit there and kind of get a group together.”

As the series heads to Daytona, Stenhouse has the lone victory at the track last July in 12 career starts at the World Center of Racing. He finished 29th in the season-opening Daytona 500.