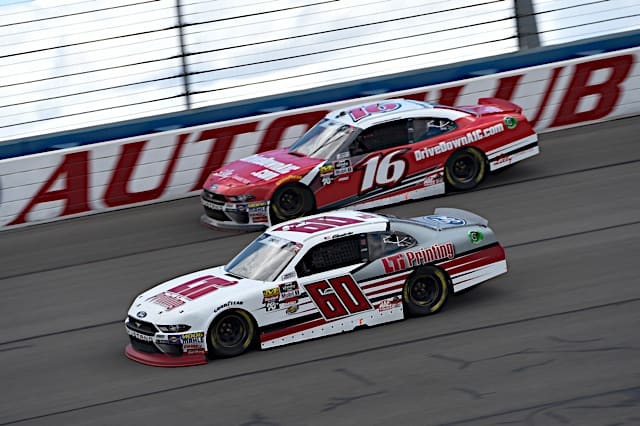 It’s been all about right place at the right time for Austin Cindric this season but tonight, he wasn’t in the right place. As the field entered turn one, Cindric was running inside the top-five when Matt Tifft hooked the No. 60. From there, many cars had nowhere to go including Tyler Reddick, Ryan Truex, and others.

As Cindric clipped the No. 9 of Reddick and the car went back up the banking, the car caught the asphalt and sent it flipping a total of two times. Cindric and Joey Gase came to a rest at the apron of turns three and four. Cindric would get out of the car under his own power. and later would be released from the infield care center.

“My first time ever flipping a car, so that’s always an interesting experience,” said Cindric. “It’s unfortunate we have a strong day and come up short, but I’ve just got to be thankful for NASCAR and Bell helmets and Roush who builds these safe cars and does what they do to make me be able to walk out of something like that with no bruises or anything. I’m just thankful for that. I wish we would have been able to see that come to fruition. I’ve had some tough races here and today was gonna be a good day, but it’s unfortunate and we’ll move on to the next one. My next one with the 60 guys will be at New Hampshire, so I’m looking forward to that and giving them a run they really deserve.”

A big crash takes out a large chunk of @NASCAR_Xfinity teams at Daytona! Watch the finish NOW on @NBCSN or stream here: https://t.co/vBhAIip72S pic.twitter.com/n1UysiHm1k

“I’m fine,” added Cindric. “It’s just unfortunate. We have such a strong run like that and it comes to an end early. There are plenty of things I can complain about, but I have to be thankful that Roush and NASCAR and everybody else who puts safety first really comes to fruition in situations like that. It’s definitely the biggest wreck I’ve ever had. It’s unfortunate I keep having those at Daytona. I’ve got to quit going to this infield care center here. I know all the people and all the faces. They’re very nice, but it’s just a shame. We were giving Odyssey Batteries and the Ford guys and Roush guys a great run and it’s too bad to see us come up short.”

Karma is a b*tch.