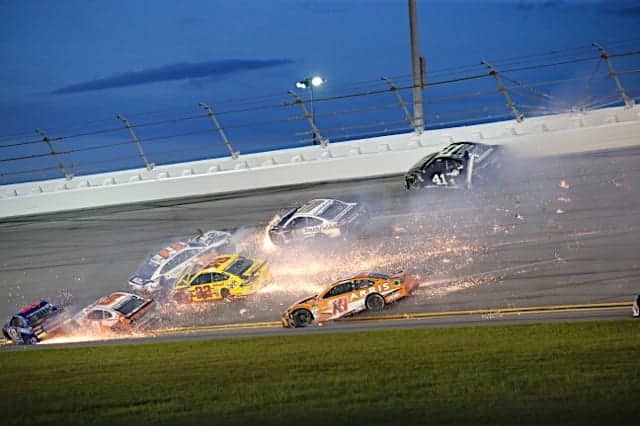 It normally takes a while for the Big One to happen in a NASCAR restrictor plate race.

The urgency isn’t as high, competition isn’t as tight and it’s a controlled chaos early on. On Saturday (July 7) in the Coke Zero Sugar 400, the first stage went off wreck free.

But it wouldn’t stay that way much longer. On lap 54, it wasn’t controlled chaos… it was just chaos. Ricky Stenhouse Jr. clipped the No. 2 of Brad Keselowski as both were battling up front. The wall for anyone to get through closed up fast, resulting in over half the field getting involved.

The Big One started at the front of the field.

Ryan Newman and Kyle Busch got through barely, but it's as if the rest of the field just piled in at Daytona.

A total of 26 cars were involved in the incident with seven drivers out of the race. Luckily, no one was hurt although tempers flared over a wreck many thought was preventable. Some thought Stenhouse was clearly at fault; others felt a block from William Byron was to blame.

“Ricky (Stenhouse Jr.) was doing the best he could to give me a good push and had a great run to take the lead. The car in front of me just threw a late, bad block,” said Brad Keselowski. “I made the mistake of lifting instead of just driving through him and that’s my fault. I know better than that. I’ve got to wreck more people and then they’ll stop blocking me late and behind like that.”

“I was running in the high lane and I just have to giggle, there’s no safe spot out there,” added Busch. “I thought being in the top two or three is pretty safe, but we just got clipped from behind. Usually, there’s that danger zone that everybody knows about from third to 12th and we didn’t get strung out enough to get away from some of the action.”

As the field was coming to the start/finish line, Stenhouse hooked Kyle Busch, causing the second big wreck of the night. This crash would end the race of last weekend’s winner Busch, Byron and others. A total of seven drivers were involved in this crash, leaving only 29 cars still running by the end of stage two.

Kyle Busch expressed his frustration toward Ricky Stenhouse Jr. after being taken out of contention at Daytona. #NASCAR pic.twitter.com/xG91veYvTA

Don’t remember seeing a single driver cause as much damage as Stenhouse did last night.

25 cars damaged in the first wreck but Stenhouse continued driving over his head and took out even more contenders in the second wreck he caused. He tried to start a third wreck when he body slammed Almirola on the straight away but Aric managed to hold on. Jeffrey Earnhardt finished 11th. I think Ricky has been hanging around Danica on the sly.

And Amy Henderson thinks plate racing is great because it gives no-talent drivers like Stenhouse the ability to take out half the field with no repercussions. Stenhouse should have been parked after the first incident. And he should be parked for the rest of the season for the second, but NASCAR will call this an exciting race and giving Wrecking Ricky a bonus.