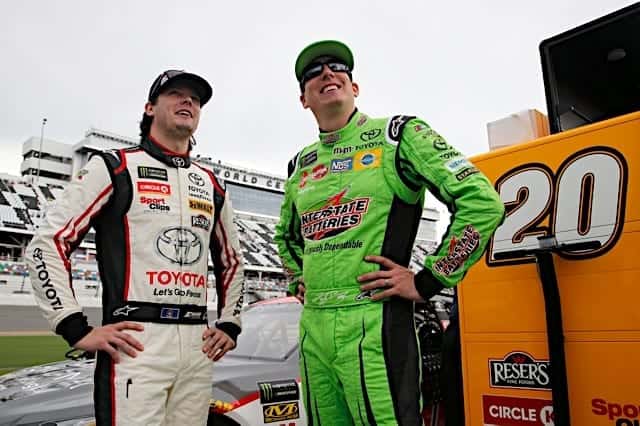 What a win that was for Erik Jones under the bright lights at Daytona International Speedway! Not at the track this weekend, I actually watched on DVR. So by the time I settled down for the race, I already knew Jones was the winner. But watching the laps click down, I saw how long he fell a lap behind. And then, even when on the lead lap, he ran at the back of the main pack. I still couldn’t see how he would do it.

“I definitely feel this race has lifted a lot of weight off my shoulders, for sure,” said an ebullient Jones in the media center afterwards. “You feel the pressure, for sure, coming into the year in taking over and working with almost the same group that was with Matt [Kenseth] last year… You feel that and you want to go out and perform and run really well.”

Now that he’s got that elusive win under his belt, it will be interesting to see how Jones runs in the second half of the season. Now, with a postseason bid in hand, can he make a deep playoff run like Chase Elliott did last year?

Speaking of Elliott, he is now zero-for-95 at the Cup level. But you have to feel he’ll be the next “youngster” to pick up a first MENCS victory. And with eight second-place and eight third-place runs under his belt in those 95 previous efforts, you’d be hard pressed to argue that he isn’t due. But of course, “due” means little in racing where results are what counts.

One final point to make here. Kyle Larson took 99 races to win his first. Elliott’s right around there in terms of starts. Is his long-awaited win just around the corner, too?

I get that rules are rules and you have to enforce said rules. That’s especially true with cars traveling at the speed they do at Daytona International Speedway (and elsewhere on the Cup circuit). But you can’t help but feel genuinely heartbroken for Justin Haley, who made a phenomenal maneuver to take the lead coming to the line in the final lap of the NASCAR XFINITY Series race.

Yes, his tires dipped briefly below the yellow line demarcating in and out of bounds. But what a way to (temporarily) win and then lose just his second ever XFINITY effort. Pablo Picasso once said, “Learn the rules like a pro, so you can break them like an artist.”

Well, in the case of Haley, he certainly broke the rules like an artist. It was a breathtaking move that had me shouting “where did he come from” at the television and my dog (who seemed utterly unmoved, for the record.)

But rules are put in place for a reason and there can be little argument, by the letter of the law, that NASCAR made the correct decision. Somewhere in a parallel universe, though Justin Haley is probably still out celebrating a win that his gutsy move so richly deserved. Life isn’t fair sometimes so here’s hoping there’s a huge win out there in Haley’s stock car future.

Meanwhile, in Formula One, the battle royale between two four-time champions – Sebastian Vettel and Lewis Hamilton – continues apace. This past weekend, it was the German who grabbed the advantage. He wrestled his Ferrari to a hugely morale-boosting victory at Hamilton’s home venue of Silverstone, Vettel’s second win at the famous old British track.

For Hamilton, it was a day which could have turned out much worse. Starting the race from pole, Hamilton was dead last by Turn 3. He was beaten off the line by Vettel and Bottas and then spun by Kimi Raikkonen, a move Hamilton openly suggested was “interesting tactics” which appears to be code for “deliberate”. Hamilton walked back his criticism on Monday, saying “sometimes we say dumb [things]” and that “Kimi said sorry and we move on. It was a racing incident and nothing more.”

Now, whether or not he believes that in private is a different matter. But if I had to guess, this sort of commentary and tension will ratchet up inexorably in the second half of the F1 season. If you’re not watching, you should give it a try.

FOUR: Next Up, Kentucky

After the excitement on the high banks of Daytona, we head to the more prosaic venue of Kentucky Speedway. The cookie cutter mile-and-a-half tri-oval in Sparta will host just its eighth Cup race this Saturday night under the lights (July 14). Leading the way amongst active drivers is Brad Keselowski, who has three wins. Kyle Busch has a pair while Matt Kenseth and Martin Truex Jr. have one apiece.

It was the 2018 MENCS champion who won this event last year with a typically dominant performance. Truex led a race high 152 of the 267 laps, including all but three of the last 114. Will the No. 78 team triumph again after a near miss at Daytona?

If you’re looking at your NASCAR fantasy lineups, Kyle Busch will be a good option. The current points leader has a series best overall average finish of 5.1 at the track. But one darkhorse might just be the newly minted Cup winner Erik Jones, who finished sixth in his sole start at Kentucky.

FIVE: The Other Dillon

Finally this week, a shoutout to Ty Dillon. Dillon finished sixth at Daytona – his highest ever Cup finish in 72 attempts spread over five years. Keep in mind it’s only his second full-time season at the Cup level for underdog team Germain Racing. And while it might not be much to write home about, it’s still a morale-boosting finish. Indeed, it’s the first top 10 ever for Dillon after overcoming a litany of in-race issues.

Things that happened to @tydillon at Daytona…

1. Fuel pressure issue coming to the green for Stage 2
2. Sustained splitter damage in the first “Big One"…and the second
3. Flat tire on the overtime restart
4. Overcame it all to finish sixth in the #GEICOMilitary Camaro ZL1! pic.twitter.com/b6LW6aNk27

For Germain Racing, it’s just a seventh top 10 ever in 334 total races over a decade of competition. It’s also the first since Casey Mears ran sixth in the 2015 Daytona 500.

I think all the angst over the performance of the young drivers is much ado over nothing. They will get their wins and it is wise to remember that a book doesn’t end with Chapter 1 or 2 or 3. Often the early hero turns out to be the villain at the end.

Plus, most young drivers need a break to win their first one. Austin Dillon, who wouldn’t qualify to be an Uber driver, has two fluke wins, one with fuel mileage, the other by wrecking the leader. Buescher won a rain-shortened race. And now Erik Jones has won a race where more than half the competition, including almost all of the TOP competition had been eliminated.

At least Blaney and Elliott have shown a degree of maturity and car control which puts them head and shoulders above the other young guns, even though they have only one win between them.

And when is Jimmie Johnson going to iive up to expectations?

Here’s the thing about the “rule” Haley did not break that NASCAR said he broke.
There is no act of passing or whatever the hell wording was used. In any case of position, once the bumper is passed the front of the other car you are in front or have passed said car.
In this case, NASCAR is getting crucified since there have been much more egregious examples of passing with tires below the lines and no penalty. Oh wait it was Junior so its fine, its one of the big teams so its fine, its a little team so hammer them to put them in their place.
Also, the rule is left sides below the inside yellow line so he may have been on the line while passing but he was not below the inside yellow line until after the pass was made (nose in front).

Go check some of the photo finishes at the line and the few hundred feet before and see if this exact scenario has happened before.

Anyone touting the 24 absolutely broke the rule is drinking the same delusional Kool-Aid NASCAR is. If folks are debating about he “may have” that is different, but again NASCAR is full of sh1t on this one. So once again instead of being able to tout and be happy and proud of the old fashion notion that anyone can win at anytime in NASCAR and have this be a good story NASCAR just continues to add fuel to the “I give up on NASCAR” crowd and appears to want to hemorrhage fans right and left due to stupid decisions, willy-nilly rules enforcement, etc.