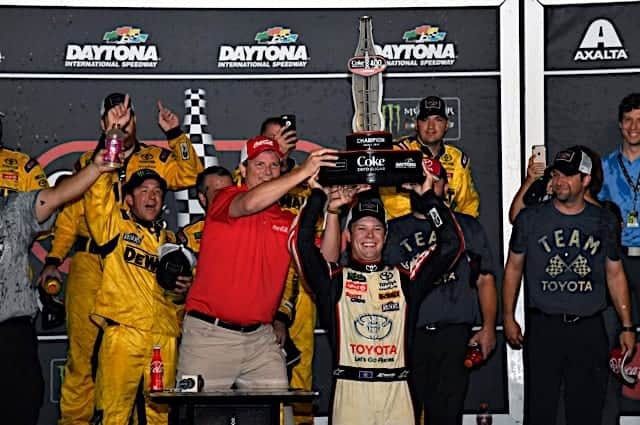 Daytona International Speedway is always intriguing, no matter what happens; it’s a crown jewel for TV broadcasters.  Typically, the Coke Zero Sugar 400 starts the NBC portion of their second-half coverage.  However, due to schedule changes, it is now the second NBC race and the first on broadcast television.

The biggest story Saturday night was clearly the wrecks.  Approximately 90 percent of the field got a piece of at least one of the crashes.  Ricky Stenhouse Jr. seemed to be front and center in all of them.  The term “dart without feathers” gets thrown around every now and then in NASCAR to describe someone that’s out of control.  Drivers who have been given the moniker include David Ragan (in his Cup debut at Martinsville in 2006) and Brian Vickers (lost his dang mind at Martinsville and got in a wrecking contest with Matt Kenseth).

Stenhouse is the exception to the rule.  Neither Ragan or Vickers were having great days when they commenced their crashfest.  Stenhouse, more or less, had the best car but still triggered the messes that he did.  His peers didn’t hold back in their post-crash interviews, either.  After he won stage two, the NBC booth talked to Stenhouse and he didn’t mince words.  To their credit, they asked him what happened directly and Stenhouse was honest with them.

Since the race was on NBC, the network brought out the big guns.  Last year, it was all about the Bat Cam and additional video-type enhancements.  This year, Mike Tirico made the trip to Daytona for what appears to have been his first Monster Energy NASCAR Cup Series race.  Unlike a number of other big names in sports broadcasting, it appears that Tirico did his homework.  It’s rare that someone outside of NASCAR broadcasting seems like they have any clue about what they’re seeing when they show up.  Tirico appeared to be the exception.

For the race on Saturday night, Tirico hung out an the Peacock Pit Box with Steve Letarte.  While he wasn’t the one talking about strategy, it was clear he had read up on what was going on in NASCAR, why certain things are important and so on.  It’s a sign of professionalism and respect on Tirico’s part, what NASCAR has traditionally not received all that much from broadcasters with “stick-and-ball” backgrounds.

A race like Daytona is perfect for Dale Earnhardt Jr. in the booth.  During his career, Earnhardt was the grandmaster of restrictor plate racing.  Now, viewers had the chance to get into his head and hear what he would be thinking.  Admittedly, having watched every Cup plate race that Earnhardt ever competed in (all 70 of them), the explanations were not all that different than what the video shows.  He loved to lead as much as possible.  In the early part of his career, no one could get up front like Earnhardt could.  Four consecutive wins at Talladega showed that.  Today, you often see drivers trying to lead the field up next to the outside wall.  Earnhardt was first to do that in the 2002 Aaron’s 499 at Talladega, a move that boggled minds at the time.

Some questionable decisions did pop up during NBC’s in-race coverage.  For instance, when Paul Menard wrecked on lap 49, the coverage cut away mid-crash for some reason.  No clue what went into that decision, but it shouldn’t have happened.  You had the wreck, then you cut away.  It’s like there’s a delay on the button in the TV compound that switches cameras.

Another issue was with Jimmie Johnson and his electrical problems.  During Johnson’s green flag pit stop on lap 121, it was noted that the team had changed batteries multiple times earlier in the race.  Watching that, I thought to myself, “Why didn’t they tell us that earlier?”  That could have been a pretty big story.  Sure, there was a lot of stuff going on, but that problem deserved a little bit of time right then and there… not an hour or more later.

That said, NBC redeemed themselves with their coverage of Johnson’s penalty.  You might remember the ridiculous moment late last year when Johnson was not penalized for getting a lug nut tightened outside of his pit box. That loophole was fixed this offseason.  Apparently, crew chief Chad Knaus either didn’t get the memo or was too ticked off to care.  NBC correctly showed how Johnson was over the line while getting the last drops of fuel.  The penalty (one lap) is harsh, but the No. 48 team should have known that going in.

The race ran a little long.  As a result, viewers on NBC only saw the two interviews with Erik Jones before they left the air for the local news.  Over on NBCSN (who simulcasted the final green-white-checkered finish), viewers got a number of interviews with the top finishers, in addition to analysis.

Two weeks into their season, the NBC booth is slowly getting into a groove.  Earnhardt is very enthusiastic and it seems to be rubbing off on everyone else.  While it’s nowhere near as over the top as we often see on FOX, it seems like everyone is having loads of fun. That’s great to see.

NBC does seem to make a lot of use of their in-car cameras, much to the consternation of some viewers.   They debuted the Helmet Cam last year and love to make use of it.  At least they can point some things out that FOX wouldn’t normally look at, like Chris Buescher immediately to Darrell Wallace Jr.‘s right in the mirror at one point Saturday night.

Restrictor plate races tend to be more inclusive broadcasts since everyone is packed up together.  Given the sheer amount of wrecking, nearly everyone got their due coverage with the possible exception of Landon Cassill because of early issues.  Even when wrecking wasn’t taking place, the telecast was not absolutely at the front of the field all the time.  There were plenty of stories to tell and NBC did a decent job at getting that coverage out there.

That’s all for this week.  Next weekend is another NASCAR tripleheader, this time at Kentucky Speedway.  The Trucks race Thursday night, XFINITY on Friday night and Cup on Saturday night.  Meanwhile, the Verizon IndyCar Series travels to Toronto and Pirelli World Challenge returns to Portland International Raceway in Oregon.  TV listings can be found in Frontstretch’s Television tab. We also offer the latest TV ratings as well.

We will have critiques of the NASCAR tripleheader from Kentucky in next week’s edition of Couch Potato Tuesday here at Frontstretch.  In the Critic’s Annex, we’ll cover Friday night’s Coca-Cola Firecracker 250 for the NASCAR XFINITY Series.

so you couldn’t have just said nbc’s coverage of the race was good. we have to get the earnhardt mention whenever we can.

The coverage is definitely improving. Not sure if it’s due to Junior, although I suspect it is, but the emphasis is shifting from what the car is doing to what the driver is doing – how the drivers are driving. I like that a lot. I do believe that placing more emphasis on the drivers and less on mechanical performance of the machinery will improve the popularity of stock car racing.

Tirico is too professional an announcer to get involved in a WWE show like Brian’s product. I was stunned when I saw him on the broadcast. I wonder what he did to get punished like that.

he looked like a fish out of water in his collar and tie up on the peacock pit box. but i guess he’s giving a viewpoint of a newer fan’s experience.

Granted I watched most of the race with the Mute Button on, which is standard operating procedure for me. I cannot stand Junior’s voice and Burton never shuts up. But the absolute worst announcer in NASCAR is Rick Allen who screams every development as if it were the Second Coming. And I did catch his glee at Jimmie Johnson getting his lap back and his prediction that now JJ could actually win this thing, even though he has not shown speed in any race all year.

The high point of the night then, was when Bubba Wallace took Johnson out. I love it when the announcers are proven to be the morons they truly are.

And it will be back to the Mute Button this weekend. I will NEVER listen to any of NASCAR’s amateurish announcing teams for an entire race. NASCAR is a second-rate sport with third-rate TV coverage.

I think most of Saturday’s event showed the problem to be they don’t know what to show when they can’t follow their script from the morning meeting. When Baby Busch was wrecked they couldn’t focus on him or some of the other favourites for the rest of the event. I’m surprised they didn’t show his car sitting in the garage like they did for J-Jo a few years back. If they had a proper agenda like televising a race instead of making a movie comedy they would be a lot better off.

The media and NASCAR have a drug addiction for RALPH because of who his PAPPY WAS! It is rather embarrassing the attention this 43/44 man child gets….and he revels in it!!!!!!!!!! He is not the “fan favorite” they think he is, and I resent him being treated as such and hearing Junior, Junior, Junior!!!! What they view as pearls of wisdom, I struggle to understand what the hell that doofus is saying. But that is what the mute button is for.