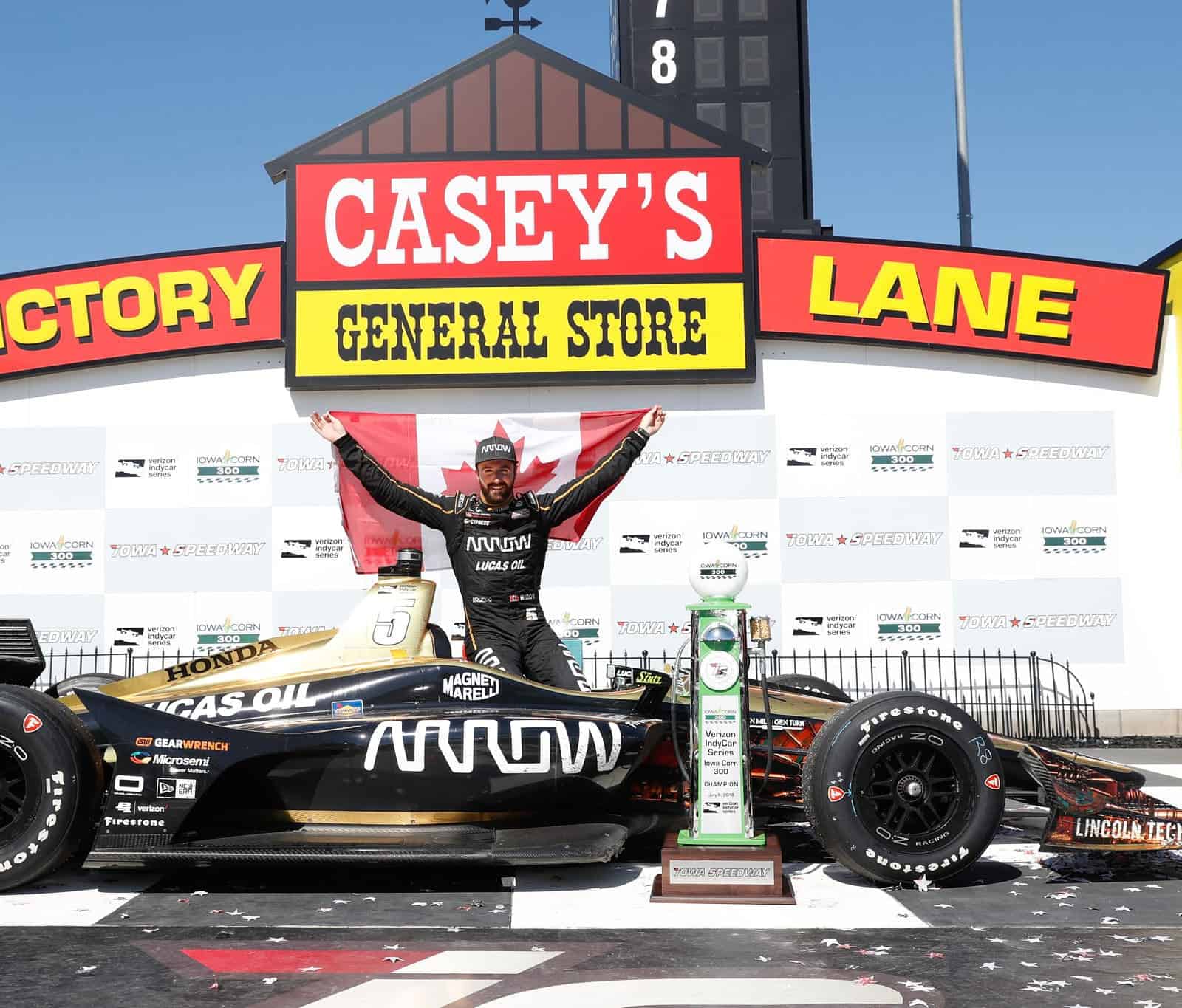 After failing to qualify for the Indianapolis 500 in May, James Hinchcliffe’s season seemed to be a lost cause.

Hinchcliffe lost tons of ground in the championship, and the morale of his Schmidt Peterson Motorsports team was obviously pretty low.

But the No. 5 Honda driver overtook Team Penske’s Josef Newgarden, who led 229 of 300 laps, at the 0.894-mile short track, with 45 to go on Sunday afternoon and claimed his first victory of the season at Iowa Speedway.

From Lap 294 until the finish, the track was under caution conditions because Ed Carpenter laid debris in Turn 2. IndyCar officials opened pit road, leading to Newgarden and Wickens pitting, but the other three lead lap cars stayed out.

It seemed like the race would have a dramatic finish. Three front runners were on 60-plus lap old tires while the fourth and fifth drivers were on fresh rubber. Could it be like Phoenix all over again when Newgarden overtook Wickens for the victory? Well, no, it wasn’t.

Race control was unable to get the race under green flag conditions in time, so basically, Wickens and Newgarden coughed up their podium finishes for no reason.

Naturally, fans and teams were upset with the way the race ended. There was no overtime, no restart, no nothing. It just ended under yellow. The only people that were happy were Hinchcliffe’s team and the other two drivers that were able to steal podium results.

That was not a good look by IndyCar. The race should have been red flagged, that way the track could be cleaned and the race could at least have a two-lap shootout to the finish. But nope. This isn’t NASCAR. We had to settle for a yellow-flag ending.

Yellow flag endings aren’t the problem though. It’s the way IndyCar race control failed to do its job and made teams think it would be OK to pit. Pit road should never have been opened in the first place. Point blank: it was embarrassing.

The series goes north of the border next weekend for the Honda Indy Toronto on the streets of the Canadian city. Scott Dixon leads the championship by 33 points over Newgarden and 41 over Alexander Rossi. Newgarden is the defending winner at the Ontario street circuit.

There is nothing Indy Car could ever do to equal the gross incompetence of NASCAR. A race ending under yellow is not a disaster. One care taking out 35 other cars with no repercussions is a disaster. I personally find the G-W-C to be another NASCAR gimmick designed to appeal to the lowest common denominator of fan who wants to see mayhem rather than a legitimate finish. Going back to ending races under yellow would be a step FORWARD for NASCAR. but their moronic fan base would never accept it – unless it meant a win for one of their favorites like Dale Jr. or Chase Elliott or Ryan Blaney.

The fans paid for a 300 lap race and they got a 300 lap race. There`s nothing on the ticket that guarantees a green flag finish. Are you listening , Brian? If the Indy 500 can finish under yellow so can one of the events of your product.

Maybe the race finishing under yellow saved the car owners a lot of money if there was the carnage like Brian’s event had the race restarted for one lap.

And an Indycar lap at Iowa isn’t like a lap at Daytona or Talladega in Brian’s demo derby cars.