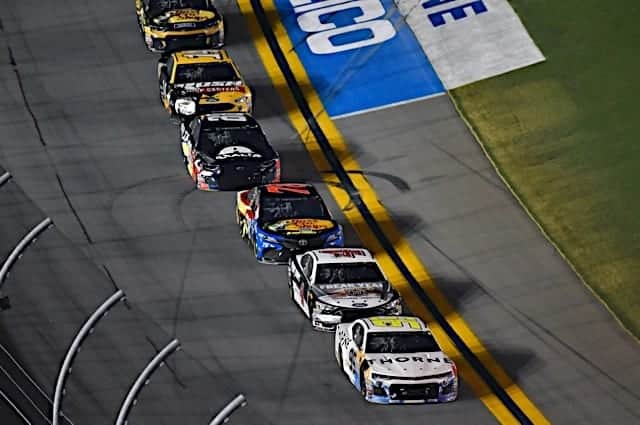 Daytona International Speedway has been a fixture in NASCAR for 60 years.  Its towering banks and high speeds have held the power to humble drivers from the very beginning.

This weekend continued a long tradition at the World Center of Racing.  Drivers arrive in Daytona expressing optimism about their chances to reach Victory Lane.  While Erik Jones left triumphant, many more departed this track with crushed race cars and crushed dreams.  In that long list of disappointed drivers, there are two who had a particularly rough evening in Saturday’s race (July 7): Ricky Stenhouse Jr. and Jimmie Johnson.

Stenhouse came to Daytona as the defending winner of the track’s summer event.  With one win each at Daytona and Talladega in 2017, Stenhouse was building a case as NASCAR’s next great restrictor plate racer in the making.  In addition, he came into Saturday’s race within striking distance of a playoff position.  Despite the obvious struggles of Roush Fenway Racing, Stenhouse was seemingly carrying the No. 17 team on his back in an effort to reach the postseason for the second year in a row.

Unfortunately, his high hopes for Daytona literally came crashing down.  While he won two stages and led 51 laps, he also found himself at the center of most of the night’s major accidents.  On lap 54, a bump draft gone wrong by Stenhouse sent Brad Keselowski crashing into the Turn 3 wall, and the ensuing wreck collected 26 cars.  Keselowski primarily placed blame for the crash on getting blocked by William Byron, but the bump by Stenhouse certainly did not help matters.

From there, Stenhouse’s race slowly came unraveled.  On the way to winning the second stage, he made contact with Kyle Busch and set off another big wreck that eliminated Byron and damaged Jones.  Stenhouse soldiered on in the lead pack until getting tangled up with Kyle Larson on lap 124 after the No. 42 blew a tire.  While Stenhouse kept rolling, damage from that incident, along with additional contact from Aric Almirola, finally took its toll on the No. 17.  With 10 laps to go in the race’s scheduled distance, Stenhouse had a tire shred apart and send him spinning through the infield.  He limped home to a 17th-place finish, one lap down.

It was not a surprise to see Stenhouse race aggressively at a restrictor plate track, but it was surprising to see how much those tactics backfired on him.  The same approach that earned Stenhouse his first career wins, and broke a long winless streak for RFR, took the No. 17 out of contention and raised the ire of his competitors.  Kurt Busch best encapsulated the feelings of several drivers and many fans with one, particularly sharp tweet.

Thank you to everybody @StewartHaasRcng, car was fast. Sucks we got caught up in the #StenhouseDD (DemolitionDerby) but it’s a product of him being 17th in points and racing “for every point” pic.twitter.com/ai2rej6AhY

Suffice it to say Stenhouse will be in the doghouse with his competitors for a while.  Of course, every driver has bad days, and he will find a way to move on.  But for Stenhouse, who was building a claim to fame as a restrictor plate ace, Saturday’s performance will sting for some time.

Johnson, meanwhile, once had a reputation similar to Stenhouse’s as an aggressive racer on superspeedways.  While he went on to score his fair share of wins in restrictor plate races, Johnson’s career is not about being dominant on one type of track.  It is about being dominant almost everywhere.  With seven championships and 83 wins at NASCAR’s highest level, no active driver can match Johnson’s accomplishments.

And yet, the 2018 season has humbled Johnson like no other year before.  Halfway through the season, he remains winless and has posted only two top fives and six top 10s.  In all of his full-time seasons, Johnson has posted at least two wins and never failed to make the playoffs.  Another postseason berth is more likely than not.  However, the No. 48 team has not been a strong contender to win many races this year.

Saturday at Daytona might have been Johnson’s best chance to win thus far.  Looking like the seven-time champion of old, he slipped through the crashes and drove into the lead on lap 109.  He stayed in contention until hitting pit road with around 40 laps to go.  As Johnson began to roll out of his pit box, his fueler still had the fuel can engaged.  NASCAR deemed that the No. 48 had pitted outside the box, resulting in a one-lap penalty.  His crew chief, Chad Knaus, struggled to understand the ruling.

How quickly Knaus forgets.  NASCAR tightened up the penalties and parameters of pitting outside the box because of this incident at Charlotte Motor Speedway last year.

Johnson’s team clearly tried to service the car outside the pit box and inexplicably escaped a penalty for it.

This time, there was no escape, and the consequences ultimately took away Johnson’s shot at the victory.  He did get the free pass as a result of Stenhouse’s solo spin on lap 150, only to get caught up in another accident while trying to work his way through the field.  Instead of finally breaking his winless drought, Johnson’s night ended with a destroyed car and a 23rd-place result.

It was only five years ago that Johnson swept both Daytona races on the way to his sixth championship.  Johnson’s performance in the 2013 Chase, by the way, included nine top-10 finishes and a worst result of 13th.  Not to mention that championship number seven came only two years ago.  For the better part of the last 15 years, Johnson could seemingly do no wrong.  Yet on Saturday night, when it looked like everything might come together for the No. 48 team, a major penalty ruined its race, a penalty that might not have been called if not for a mistake last year that pushed NASCAR to revise its rules.

Little Ricky is a wonder. He wrecked more cars in the kiddie series, as well D. Wallace (BUBBA). D. Wallace (BUBBA) has moved around a lot, but Little Ricky is still with the CAT AND THE HAT. The Cat and the Hat if memory serves threatened to fire Ricky more than once in the kiddie series as he wrecked so many cars. And yet Jack, still has this Jackass driving for him. I don’t get it, I don’t. But hey, tis not my coin. Just an observation. He and Wallace are extremely overrated for various PR declarations. Fans can see it however. I still would love to know the financial bottom line of what his actions cost teams this weekend. Jack R. and his organization is sad.

Those two are absolutely at the top of the list of overrated drivers in NASCAR, along with the Dillon boys. It would be interesting if team owners were fined for their drivers’ destruction of other team’s equipment. We’d suddenly see quite a number of drivers on the unemployment line, but these two would be at the head of the line.

48 really looked like a champ when he wrecked the 21 again….

Stenhouse is not a budding restrictor plate star – he is an accomplished machine of destruction. To feel any sympathy for a guy who causes 4 wrecks in one night is pure idiocy, but of course, this is Fronstretch where writers are not exactly the brightest bulbs in the chandelier.

And Johnson is clearly in the twilight of his career. Listening to Rick Allen predict a Johnson victory when he finally got his lap back was funny at best, irritating at worst. But another budding star, Darrell Wallace, took care of that pipe dream pretty quickly.

The only winners from this debacle where the fabricators who will earn a ton of OT pay this week and Erik Jones who lucked into a first win he never would have gotten if his mentor and a few others had survived the Stenhouse massacre.