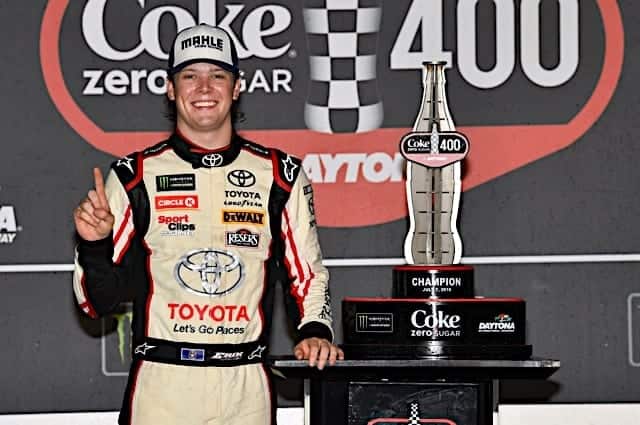 At Daytona this season, as long as you lead the last lap, one lap is all you need.

Jones had six top fives and 21 top 10s with a best finish of second at Bristol leading into the event, and now all four drivers of the JGR No. 20 Toyota Camry have parked it in Victory Lane.

His former teammate at Furniture Row Racing posted his third runner-up finish of 2018, and AJ Allmendinger was third to lead the Chevrolet brigade. Kasey Kahne was fourth in the Leavine Family Racing No. 95 and Chris Buescher was fifth in the No. 37 Camaro.

The first stage was pretty quiet with plate specialist Ricky Stenhouse Jr. winning it. Most of the contenders were erased in the two Big Ones during Stage 2, including all of Team Penske. Stenhouse also won the second stage.

It looked like Michael McDowell might be able to sneak an upset, running in the top five most of the day and leading 20 laps. But he was sandwiched between a crashing Joey Gase and Aric Almirola, which ended his night about ten laps early. McDowell’s tire then pulled a Ricky Bobby and galloped forward on its own, which drew a lot of Twitter commentary.

Aw man, I was really pulling for that tire … #NASCAR

Clint Bowyer, Kevin Harvick and Jimmie Johnson were eliminated in the final crash of the night during the first overtime, which brought out a brief red flag.

The race featured 16 leaders and 25 lead changes, and there were 11 cautions. 13 cars finished on the lead lap.

The 2018 MENCS season is now officially halfway over.

This is only the second season that JTG-Daugherty Racing has been fielding two cars, so there isn’t much history to go by, but this was the team’s best race overall in their history (as a multicar operation). Allmendinger’s third-place finish was his first top-5 this season and sixth top-10 for his career at Daytona. That makes four straight Daytona races that the No. 47 has finished in the top 10, and three top-10 runs in 2018. Buescher’s fifth place, matching his Daytona 500 result, was his second top-5 this season and fourth in his career.

Brad Keselowski won this race in 2016, but since then? His results at Daytona have been dismal, failing to finish in four straight races with a best finish of 27th in the 2017 Daytona 500. Overall, he has four top-10s in 19 starts at the track with eight DNFs and an average finish of 23rd.

2008 Daytona 500 winner Newman‘s eighth-place run was his third straight top-10 at the track, and his fourth top-10 this season. Considering that his average finish is 20.4 (and that teammate Austin Dillon is averaging an 18.9 finish) this was a much-needed good run for the Richard Childress Racing veteran.

Hendrick Motorsports has to be thrilled that there is only one restrictor-plate race left this season – at least one of their drivers has wrecked out of the Clash, the Duels, the 500, Talladega, the All-Star race and now July at Daytona. Even more astounding, at least one Hendrick car qualified for Dale Jr’s racecar graveyard in every 2017 plate race except for the Duels. On the positive side, all four HMS cars led laps for the first time in goodness knows how long. It was the first race since Pocono that an HMS driver led laps, and the seventh time this season. Combined, they’ve led 140 out of the 5,140 laps run so far in 2018.

Stenhouse won this race last year, and his stage wins Saturday night were the first in Roush Fenway Racing’s history. He also led a career-high 51 laps. And caused three cautions and damaged or destroyed roughly 32 cars. And now he’s sitting 19 points outside the playoffs in 17th after finishing one lap down in 17th. But the RFR social media team was on their game, as usual, with updates like this one halfway through the race:

With all the madness of the race itself, I completely forgot that it was Fourth of July weekend until writing this column. (I forgot entirely the actual Fourth of July itself, too.) But anyway, because of that, a handful of the cars were wearing their special holiday wraps. The best of these was the Stars, Stripes and Miller Lites scheme on Brad Keselowski’s No. 2 Ford Fusion. While being patriotic, it was not garish and somehow managed to look classy, as opposed to an eyesore of a design like some of the other cars have in the past.

Other great-looking cars on track were polesitter Chase Elliott‘s No. 9 in Hooters orange and white, and Ryan Newman’s hunter green Bass Pro Shops/Cabela’s No. 31. The charcoal gray, white and red of Erik Jones’ No. 20 looked really solid, too.

Hear fiddles, banjos and whinnying horses? That means it’s time for the MENCS, XFINITY Series and Camping World Truck Series to head to the Bluegrass State and Kentucky Speedway.

The only drivers to ever win at the newest track on the MENCS schedule are Kyle Busch, Brad Keselowski, Matt Kenseth and Martin Truex Jr. Four of those seven wins have come from a start on the front row. Busch, Keselowski and Truex would all be good picks for your fantasy team this week, and expect the Penske cars to rebound with a vengeance. Kyle Larson might be a good sleeper choice, too, since we’re in the summer stretch, and he’s been the top Chevrolet driver this season.

The Quaker State 400 presented by Wal-Mart will go green around 7:30 p.m. ET on Saturday, July 14, with TV coverage on NBCSN.