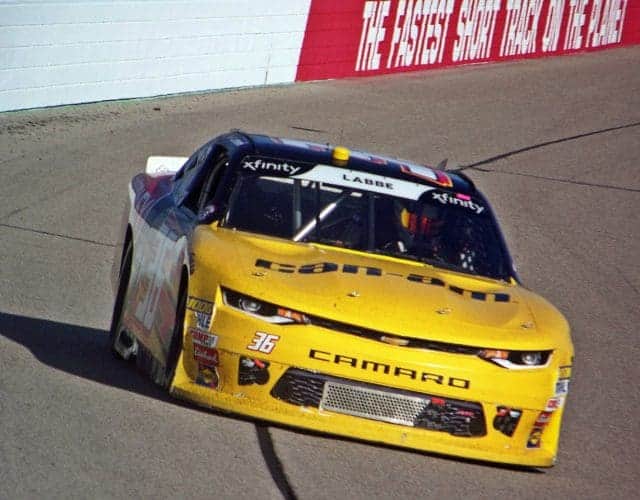 During Friday’s rained out qualifying session, 2017 NASCAR Pinty’s Series Champion Alex Labbe sat down with Frontstretch. Labbe is currently in the middle of his first full-time NASCAR XFINITY Series season with King Autosport, owned by Canadian racing legend Mario Gosselin. The season has seen Labbe exceed expectations for both being a lower funded team and a relatively new team.

Christian Koelle, Frontstretch: How has it been to run up front in just your first full-time season in the XFINITY Series? You’ve been running with cars and drivers who are on the possibility of moving up and you are in it with them. What has it been like?

Alex Labbe: We’ve been running pretty strong. We are trying to get more speed and it’s tough. It’s a battle every weekend and we are fighting through adversity as much as possible. We never give up, everybody keeps working hard. It’s fun to compete with bigger teams and the guys around here like Ryan Sieg, Jeremy Clements, Ross Chastain, JJ Yeley, and others. They are all pretty good racers and we can race each other pretty hard.

Koelle: I asked you back in Atlanta how the transition has been from Pinty’s to XFINITY. Now that we are at the halfway point of the season, has it improved any?

Labbe: It’s almost like our second trip to these trips. It feels good for sure, not only the track but the seat time. The more seat time for the miles, mile-and-a-half, once you get under that you get more comfortable in the car. I think it gets better and better, just trying to work as good as I can speaking with Mario (Gosselin) about what I need for race trim. We always qualify pretty good but we just got to get better in race trim.

Koelle: The NASCAR Pinty’s Series doesn’t have any restrictor plate style tracks on the schedule. How hard is it from going to those tracks that you have to use a lot of brakes to a place where you are basically wide open?

Labbe: It’s a huge difference but it’s fun. I am just trying to work with Mario and with Tab (Boyd), my spotter. He’s trying to help me a lot to work with the air. Talladega was pretty tough because we had a green flag pit stop there and Daytona was my first time and I was just trying to figure out everything that was new with the air and the cars around me. We did better at Talladega running up front, I have learned a lot in those two races.

Koelle: Being as your team is improving and you are still in the hunt for a spot in the playoffs, how do you feel the team would do as we inch closer and closer to the playoffs. What would it be like to make the playoffs?

Koell: Any chance we will see you back in the NASCAR Pinty’s Series this season?

Labbe: For now there’s no plans for Pinty’s. I go run a late model in Quebec in a couple of weeks just on a Saturday where we run on Friday. It’s a pretty busy schedule, there’s really no good opportunities but we never know. Maybe … maybe not.

Koelle: Before this interview began, I spoke to Mario Gosselin about Canadians making their name known in the upper series of NASCAR. Do you think you are bringing more exposure to the Pinty’s Series by racing in the XFINITY Series?

Labbe: I think it’s fun. I won a championship down there last year and then I come here and I think we run pretty good. We want to prove our place here. I think it’s fun. We have a ton of support from the Canadians down there on the social media. They are behind me and it’s cool to see they are helping us. It’s cool to see DJ running a lot of Cup Series this year and we raced each other in the Pinty’s Series before. You’ve got Stewart (Friesen), he doesn’t come from the Pinty’s Series but he’s a Canadian from dirt tracks and I think he does really good in the Truck Series. I think we’re showing that Canadians can make it here.