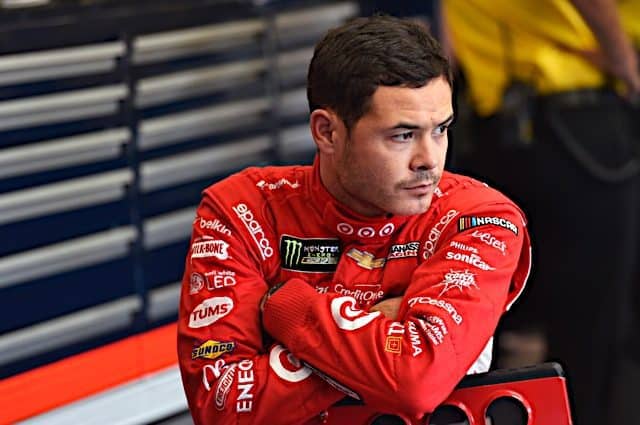 Did You Notice?: How Fast Are NASCAR’s Young Drivers Winning?

Did You Notice? … The sigh of relief among NASCAR officials the second Erik Jones reached Victory Lane? Jones is just the third 20-something driver to win this year, joining Austin Dillon (Daytona) and Joey Logano (Talladega). All of them have won at restrictor plate races, known for parity and a different type of driver skill.

Most importantly, Jones’ victory followed a week where ISC president John Saunders claimed NASCAR has “an issue with star power.” He went on to explain the sport’s young drivers have yet to build their brands, hurting the sport in the short-term while trying to rebuild its fan base.

Big congrats to @erik_jones!! Way to wheel it for the Young guys!
Bet ole ISC Pres is enjoying some crow for dinner tonight!!
Hell yeah!

So how far behind are the sport’s “young guns” in replacing drivers like Kevin Harvick, Kyle Busch and Martin Truex Jr. in the championship battle? I looked at the rate of first-time winners the last five seasons since Harvick moved to Stewart-Haas Racing and pulled his best Jimmie Johnson impression. (The 42-year-old has 19 victories during that span, second-best in the sport, three Championship 4 appearances and one title.)

Victories Since: None for either driver

Victories Since: Four for Larson, none for Buescher

Victories Since: One for Stenhouse, one for Dillon, none for Blaney

If you’re counting at home, that’s seven first-time winners in the past five seasons. That’s an average of a little more than one per season, not awful for a weekly field of 40 drivers. But only one of those (Larson) has won with any type of regularity since. Everyone else has won no more than two career MENCS races. That’s nothing compared to the championship-type pace of five wins Harvick has this year alone.

But there’s more. Three of the seven won their first at plate tracks, the type of forced parity some critics say diminish their value. A fourth, Allmendinger, won on a road course (his specialty) and has averaged just one top-five finish per year since. And a fifth driver, Dillon, has led a total of three laps in his two victories: he’s led less than 100 his entire career.

That’s the supposed superstar gap NASCAR is talking about. During that same stretch, Johnson has won 17 races in a title; Truex has 16 victories and his 2017 championship; Kyle Busch has a series-leading 20 Victory Lane trips and a title all his own (2015). All of those drivers have been around a decade or more. Their brands are already established; it’s a little harder for them to attract new fans.

But is this stretch of bleh first-time winners really outside the norm?

Victories Since: Ambrose (one), Ragan (one), none for anybody else

So that’s eight first-time winners from 2009-2013. Only two of them, Keselowski and Logano, ever won with any regularity. Add in the current NASCAR playoff format, where every winner is virtually guaranteed a spot and the 2014-2018 victories have gotten a little extra publicity … I’d say it’s a wash.

But perhaps the more frightening statistic is that in the last 10 years, that means only a handful of drivers have broken the mold. It’s nearly impossible to rise up into superstar status, perhaps a little too tough. You can technically add Truex to the sport’s top tier, who had several down years after his first win came in 2007. But that’s a very small group that’s been able to penetrate the upper echelon. Jeff Gordon, Tony Stewart, Carl Edwards, and Dale Earnhardt Jr. have retired. But almost no one has stepped up to replace them. I see Saunders’ point.

At the same time, Blaney, Jones, Chase Elliott et al still have plenty of years ahead of them. There’s plenty of time for them to break out. Right?

Here’s a look at where each of them stands.

Compare that to some of the sport’s recent top-tier drivers at the start of their careers.

So in most cases, the sport’s big drivers won early and often. That means a generation of NASCAR fans (and executives) are used to people succeeding right out of the box.

It’s just put more pressure, perhaps unnecessarily, on these young drivers to rise to the top. They’re doing all they can. The fact they’re lagging behind is a little frustrating, most importantly to them, but it’s out of everyone’s control.

So perhaps NASCAR should focus on other problems in the meantime: manufacturer parity, inspection issues, aero push. Simply yelling at the youngsters doesn’t fix it.

Did You Notice? … Justin Haley’s penalty is still the talk of NASCAR nation this week? Days after Haley’s XFINITY Series win was stripped for dipping below the double yellow line it continues to be the center of conversation. Some great columns have been written on it: Matt McLaughlin claims Haley couldn’t have advanced his position as he was already the leader. Others believe NASCAR, known for being inconsistent with rules violations, had to follow the letter of the law.

Five days later, after several conversations with NASCAR folk, I’m still torn. I’m on the side of letter of the law. Haley, technically, dipped below the line. How many other times have we seen that happen and the driver gets penalized? Tony Stewart from the 2001 Pepsi 400 comes to mind, a move that may have cost him a shot at Dale Earnhardt Jr. that night.

But I’m also painfully aware of optics. One of the commenters here summed it up perfectly….

The finish of that race left us hootin’ and hollerin’ like we haven’t done in years…it was such an incredible move! Such a great story! And then one minute later, after they announced the penalty, it was like all of the positive energy (and oxygen) had been sucked out of the room.

I’ve heard that from so many people since Friday night. For one of the few times all season, NASCAR had a Cinderella story that opened eyes. And then? A controversial call by officials took it away. The driver fans saw cross the finish line first didn’t get the trophy.

I’m always a believer the second officials get involved, there’s more harm than good. And the policy of drivers who fail post-race inspection keeping their wins makes it worse. The optics just look absolutely terrible for them, a clear case of damned if they did and damned if they didn’t.

That’s a clear sign of a rule that may need adjusting going forward.

The author of Bowles-Eye View (Mondays) and Did You Notice? (Wednesdays) Tom spends his time overseeing Frontstretch’s 30 staff members as its majority owner. Based in Philadelphia, Bowles is a two-time Emmy winner in NASCAR television and has worked in racing production with FOX, TNT, and ESPN while appearing on-air for SIRIUS XM Radio and FOX Sports 1's former show, the Crowd Goes Wild.
@NASCARBowles
Previous NASCAR Mailbox: Can Erik Jones Be Considered a Legitimate Title Threat?
Next Entry List: Buckle Up In Your Truck 225