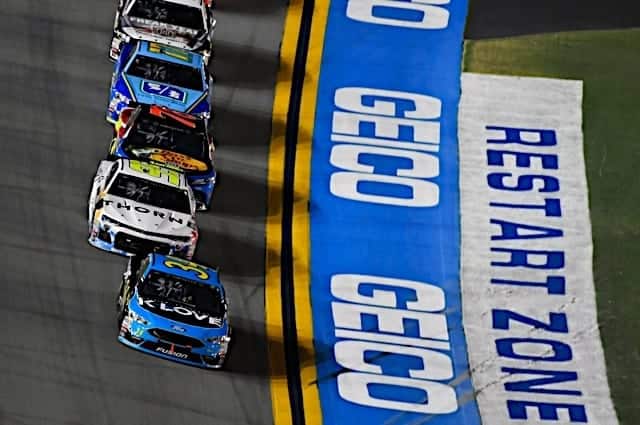 Wait, did I say race? I meant competed in a demolition derby. It had at one point seemed as if all four of the big four were going to make their way up front, but one by one they began to fall, leaving one to stand by the time the checkered flag flew.

Erik Jones was the survivor, earning his first career victory. Though normally we point out the real winners, the real losers were the body shop guys who might be able to fix the car, should there be a car to fix.

Only 18 cars survived the chaos that ensued on Daytona Beach. How many of them survived our power rankings? Read below to find out!

Kyle Busch and the other three drivers remain the same this weekend, being as all three were up front at different times during the race. Busch was collected in a lap 64 accident with former Kyle Busch Motorsports driver William Byron. Busch remained composed and checked on Byron before making his way to the infield care center.

I’m proud of you @erik_jones. I knew the day I met you and then when you beat me at the snowball derby that you had so much talent. You’ve had to overcome a lot these past few years but you are a fighter. I’m proud of you and know your Dad is up there celebrating! ? pic.twitter.com/DduSazOaeW

You remember that GEICO commercial when that fisherman tells the guy he almost caught the dollar? Well, that’s how Kevin Harvick had to feel on Saturday, because he was literally so close to finishing the race. Harvick was up front and was for sure going to be competing for the victory but that just wasn’t the way the cookie crumbled.

“Teammates wound up side by side again trying to get everything situated & we crashed into each other. I just hate it for all my @JimmyJohns guys. I don’t really know what I could have done any different on the last restart.”@KevinHarvick, 19th: https://t.co/3E2cP7vM33 pic.twitter.com/RKckauTOzn

Martin Truex Jr. was the only driver of the big four who survived the evening and came home with a second-place finish. Much like Harvick, his first victory at a restrictor-plate track in the Cup Series was so close yet so far away. Truex was the only one of the four to salvage a good day, but still, the other three showed a hair more speed.

Clint Bowyer showed off his strong restrictor-plate style on Saturday and, had he not been hooked coming to the white flag, he might have salvaged a good strong day. His car was mangled from previous wrecks and still kept kicking.

“I hate we got wrecked and lost a good @RushTruckCenter Ford and a good finish. I bet a lot of folks are probably saying that tonight. We tore up a lot of cars.”@ClintBowyer finishes 22nd after accident in overtime of #CokeZeroSugar400. https://t.co/Bi7iD4eKFu#SHRacing10Yrs pic.twitter.com/SzmgnocDSq

After coming off of a second straight XFINITY Series victory the previous night, momentum was on the side of Kyle Larson. The crashes that happened on Saturday night just didn’t give a darn about momentum, sonot even Larson was safe. He was involved in the lap 123 accident which relegated him to a 29th-place finish.

8 out of my last 9 races have been in the top 2. Love racing in the summer! Hopefully can keep it rollin.

Kurt Busch returned to the scene of his last victory and ran up front a majority of the first part of the race. He was just driving around minding his own business when suddenly Brad Keselowski spun him down the track and into oncoming traffic.

Thank you to everybody @StewartHaasRcng, car was fast. Sucks we got caught up in the #StenhouseDD (DemolitionDerby) but it’s a product of him being 17th in points and racing “for every point” pic.twitter.com/ai2rej6AhY

Erik Jones finally picked up his first career victory, quieting his doubters for at least this week. Despite damage from earlier in the race, he made the right moves on the second overtime attempt and was quick to thanks his parents for their support in his racing career. For those saying that Jones was just lucky and will be a one-shot wonder, think again and look at the rest of his statistics.

Keselowski got really irritated with those who block him and that resulted in him dropping a “pipe bomb” after the accident next to the infield care center. Keselowski looked like he was going to be a contender but that all went away when he crashed on lap 53. That accident took out all three Team Penske cars in one swoop.

Alex Bowman was solid in February and he showed another strong run on Saturday. Bowman was able to survive all of the accidents to secure a 10th-place finish. His qualifying run was even better, showing that everything could be going the right way for Hendrick Motorsports, especially at superspeedways.

It’s shocking that he made the top 10, right? Well, Ricky Stenhouse Jr. had to have a police escort out of the track after all of the chaos he caused. Stenhouse may have caused a bunch of chaos but the guy led the most laps and won both stages, the first stage victories for Roush Fenway Racing as an organization.

Stenhouse still had a good night earning the same points as race winner Jones despite finishing 17th after being involved in five (yes, FIVE!) cautions. Funny how stage racing works, isn’t it?

Well… not exactly how i thought it would go. My team had an unbelievable car. I Made too many mistakes that took out too many racecars. Hate the fans had to see their drivers get caught up in it. On the other hand my team fought hard and gave it all we got.

Only a complete moron would rate Ricky Stenhouse in the Top Ten after his embarrassing performance Saturday night. I cannot even recall an instance when one driver caused so much mayhem by his own stupidity and recklessness. He deserves to be suspended, not praised, for wrecking half the field and spinning out twice on his own. This driver clearly ran out of talent and last place was where he should have been placed after the debacle was over. His stage wins should have been stripped and his point total for the night reduced to zero. Now we have to continue to deal with this arse and his incompetence as he foolishly tries to make the Playoffs for the sole purpose of being eliminated in the First Round. Christian Koelle is as incompetent as Stenhouse and that’s saying something!

The spawn of Satan hath spoken!

You really are one sick puppy! You really do need to speak to a psychiatrist. And you need to give it a rest. We know! You hate Ricky. After all, you posted a vicious comment yesterday that could be taken as a very serious death threat against Stenhouse. But then, you are a lawyer. Unfortunately, because of your vile, vicious attacks on anyone and everyone who dares to offer an opinion different that yours, especially any of the writers on this website, you are giving lawyers a worse reputation than they already have. All this because your precious Kyle was taken out at Daytona. Cry me a bucket of tears!