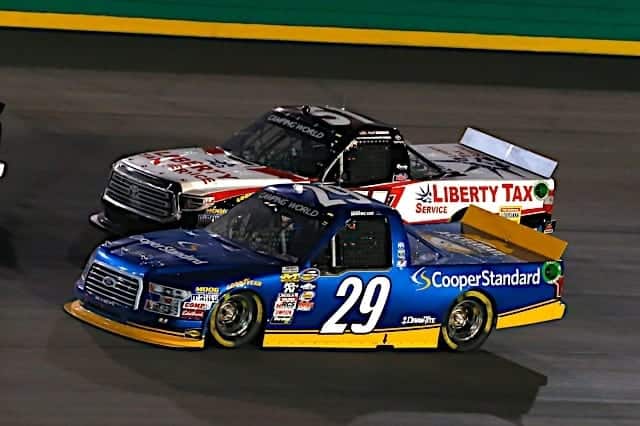 For Thursday night’s Buckle Up In Your Truck 225 for the Camping World Truck Series at Kentucky Speedway, there are 33 teams currently entered.  As a result, one team will go home.

DGR-CROSLEY has entered two trucks, the full-time No. 54 with co-owner Bo LeMastus driving and the No. 17 for Chris Eggleston.  Even though Eggleston was technically hired to drive the No. 17, this will be his first race in that truck.  Previously, he drove the No. 54 just in case weather reared its ugly head.

While it doesn’t actually say it on NASCAR’s official entry list, Tyler Young will not be back in the No. 20 Chevrolet this week.  That truck will once again be driven by Tate Fogleman in his second career start.  Fogleman replaces Max Tullman, who made his series debut at Chicagoland Speedway.

Robby Lyons is listed back in Premium Motorsports’ No. 15 Chevrolet.  It will be his first race since Charlotte in May.  A couple of weeks ago, Lyons sent out a tweet to explain just what has kept him out of the No. 15 for so long.

Henderson Motorsports is back with Parker Kligerman this week, who is likely doing double-duty with his TV duties for NBC Sports.  Clay Greenfield is back as well with his part-time No. 68.