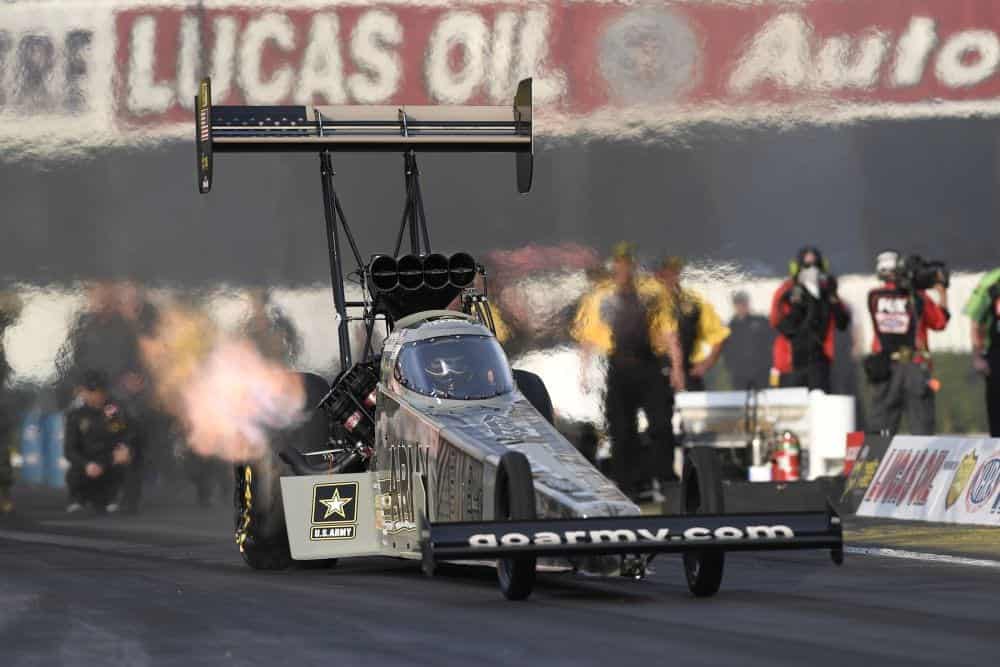 While Air Force is still in NASCAR, the other military branches left the sport. The sponsorships were viewed as a poor use of taxpayer-backed advertising and recruitment dollars. Critics argued that the number of new recruits gained from the trackside activations couldn’t be proven, and thus they were not sound return on the investment.

And yet, in spite of their departure from NASCAR, the U.S. Army stayed with NHRA drag racing, continuing as a sponsor of the Don Schumacher Racing Top Fuel dragster driven by Tony “The Sarge” Schumacher. It seemed a bit like a paradox, so we asked Army representatives about it a few years ago. The resulting article, Smart Investments: Why the US Army Is Still on the Drag Strip, painted a picture of a happy sponsor who had yet to come under fire, or if they had, had managed to sufficiently make their case for continued involvement in drag racing.

The case was not without merit. It wasn’t just about recruitment and numbers for the drag racing crowd. It was about outreach, particularly in encouraging young people to consider the STEM (Science, Technology, Engineering and Mathematics) fields as their future careers. There is a very valid connection.

The increasingly technological armed forces will be among the many places these skills would be valuable. Let’s face it though, these disciplines, often seen as dry, boring or difficult, can be a hard sell to young people. The Army had some answers to this, setting up demonstrations to show some of the cool technology they use — things that require STEM skills to develop, improve and, in some cases, operate.

Drag racing was a good partner because it was another way to demonstrate how cool the application of a STEM field can be. Getting a car from A to B, particularly a Nitro car, also employs elements of all the incorporated fields.

The Y.E.S (Youth & Education Services) program the U.S. Army runs as part of its NHRA program brings youth from the area to the race track where, according to the the Army website, it “allows participants the opportunity to learn about and explore various career opportunities while gaining a new perspective on STEM by taking what they acquire in the classroom and applying it to real-world experience.”

In addition to its outreach program, the ability of the Army to connect its interactive activity area at the track with the accessible pit area of Schumacher and the other DSR drivers, along with the built-in hospitality areas located right next to the teams and cars were also part of why the relationship continued for so many years beyond the other motorsports partnerships.

Not least of all was The Sarge himself, a poster child representative for his sponsor. While Schumacher is not an Army veteran, he has embraced the culture.

“I don’t drive for a tool company or a beverage company,” Schumacher said, summing up his commitment. “I drive for a way of life, and I’m very behind what I do. I love what I do. I love the American soldier, I love the families, and it has come across clearly. NASCAR, all the other classes have switched drivers many times. We’ve stuck true. I just happen to represent the Army, and I’m proud to do it.”

Alas, though, perhaps the writing was on the wall even four years ago. The U.S. Army stuck with the NHRA and DSR far longer than any other military branch continued in motorsports, but all things end eventually. After nearly two decades, this relationship will draw to a close at the end of the 2018 season as the Army will leave both DSR and the sport of NHRA drag racing.

So what will we call The Sarge after this year is over?