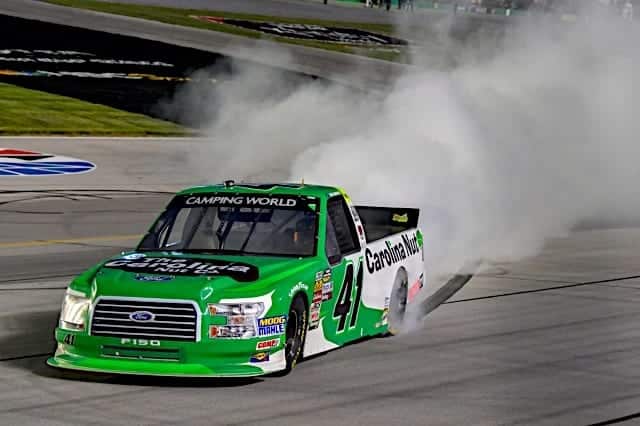 Ben Rhodes has locked himself into the 2018 NASCAR Camping World Truck Series playoffs, and he’s done it at his home track of Kentucky Speedway, winning the extremely fast-paced Buckle Up in Your Truck 225 by almost a full second over runner-up Stewart Friesen.

This was ThorSport Racing’s first win as a Ford team after racing Toyotas for the past several years. Rhodes has basically locked himself into the eight-driver playoff field as the fifth CWTS regular to visit Victory Lane this season.

Also in the top ten were Grant Enfinger, Todd Gilliland, Noah Gragson, Dalton Sargeant and Justin Haley. Everyone from 11th on back was at least one lap down.

Gragson started on the pole and led the first 27 laps, surviving a first-lap yellow flag along the way – the only caution for an accident of the night. The other two cautions came from stage breaks.

After trading the lead with Gragson for about five laps, Rhodes slipped into the front on lap 33 and won the first stage.

Eight laps into stage two, Gragson retook the lead and was never challenged throughout the second stage, at one point nearly four seconds in front of the second-place truck.

Parker Kligerman took two tires in a strategy gamble in the pit-road stampede opening stage three, and that paid off for a while, as he led 12 laps and ran in the top-10 until smacking the wall late, resulting in a 27th-place finish.

Friesen passed Kligerman for good on lap 88 and held it until the final green flag stops began, where Rhodes took no tires at lap 125 and was able to hang on until the checkered flag.

Johnny Sauter‘s night was derailed by several pit-road penalties, resulting in a 15th-place run for the series points leader.

The race took 94 minutes to complete, from green flag to checkered flag.

Up next is for the CWTS is the Eldora Dirt Derby at Eldora Speedway in Rossburg, Ohio. The annual dirt race at the Tony Stewart-owned track is Wednesday, July 18 at 9 p.m. ET, with TV coverage on FS1. Crafton is the defending race winner.