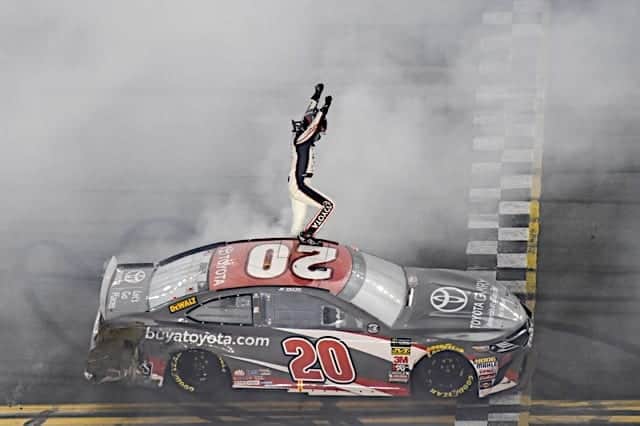 Ricky Stenhouse Jr was vilified by a handful of other drivers for his aggressive moves in Saturday’s Coke Zero Sugar 400. Was Stenhouse deserving of the backlash or was their anger misguided?

Christian Koelle: Ricky Stenhouse Jr. was really deserving of the backlash that he got. Listen I understand people saying “oh, he was just aggressively trying to win to make the playoffs” or “oh, he was just taking his surroundings” but honestly dude … it wasn’t even the end of stage two. Had all of this came after, then I would believe everything he did was alright, but it wasn’t and there’s no reason to be that aggressive that early.

Matt McLaughlin: I can’t see Stenhouse being blamed for the lap 55 wreck. William Byron threw a block on Brad Keselowski, the No. 2 car checked up suddenly and Stenhouse ran him over. The lap 66 wreck was on Stenhouse. But in the end, it’s NASCAR and it’s plate track rules that cause all these wrecks. Oh, they’ll wring their greedy little corporate mitts and sing homage to safety first, but they’ll wink while they do so expecting the huge wrecks to sell tickets and get some main stream media exposure. A nod’s as good as a wink to a blind horse.

Amy Henderson: I don’t see it. That first big wreck was caused by William Byron’s bad block on Brad Keselowski. Keselowski said he backed out to avoid turning Byron (he also said next time he’ll just turn a driver who throws a bad block), and Stenhouse hit him. When you back out even a fraction in that kind of traffic, there’s going to be a chain reaction somewhere, so the wreck was already triggered. Inevitable part of plate racing these days. The second crash was more on Stenhouse, and he was ultra-aggressive. Stenhouse has always been a bit of a loose cannon. But he’s also getting blamed for the Big One he didn’t cause by a lot of people. Keselowski’s take on the first one was correct.

Michael Massie: It’s a competition, not a nursery. If I’m a sponsor or owner, then I want a driver that will try to win by any means necessary, and that is precisely what Stenhouse was trying to do. He wasn’t intentionally wrecking people, he was aggressively trying to gain spots in an effort to collect as many points as possible. If I see that my driver isn’t doing whatever it takes to win, then I don’t want him to be my driver. Maybe if the other drivers manned up and didn’t settle for “a solid points day” so often then they wouldn’t have had a problem with Stenhouse. Dale Earnhardt and Jeff Gordon were always that aggressive on restrictor plate races and they’ve been praised for it. The famous 1979 Daytona 500 became famous because Cale Yarborough and Donnie Allison were aggressive that whole race, on and off the track.

Since the 2010 Daytona 500, only Jimmie Johnson and Dale Earnhardt Jr have more than one win at Daytona. Considering the circumstances of restrictor plate races, rate how impressive you find them to be. More impressive than other wins? Less? No difference?
Massie: A win is a win is a win. I might even argue that they are more impressive than a win at an intermediate track. This week at Kentucky Speedway, we know that Stewart-Haas Racing and Joe Gibbs Racing will put out the fastest cars. The fastest car will cruise around the track without much of a challenge from anyone else. At restrictor plate races, the winner is not a guarantee. When a driver takes the lead, he has two or three people behind him that could take it right back in a second’s notice. Those races are much more of a chess match than any other race on the schedule. Certainly, luck plays into whether or not a driver avoids the wrecks, but isn’t it also luck for a driver to end up on a team that has intermediate cars that are faster than everyone else’s?

McLaughlin: In one of the few times in his life he opened his mouth and made sense, Michael Waltrip (all of his career wins were at plate tracks) once admitted you could train a monkey to drive a Cup car in a plate race. Anyone can win a plate race because NASCAR reduces the field to the least common denominator. While a Daytona 500 win is a big career boost (Temporary. Ask Trevor Bayne), at the other three plate tracks annually you don’t really have a winner, you have a first survivor. And they want to run more plate races next year? That might be the tipping point for me. To quote my old buddy Buckwheat, “Gawn Fisin.”

Henderson: Look, no win is somehow “worth more” than any other win. Every single one of them was earned. Sometimes earning a win means avoiding trouble, playing strategy, calculating fuel mileage. It’s ridiculous to put less value on any win, especially considering just how few drivers have ever won a Cup-level race. Plate racing is a skill, just like road courses or short track have a special skill set. I will say that Earnhardt Jr. was a better plate racer than Jimmie Johnson. If you look at Johnson’s plate wins, he had an outstanding restrictor plate driver pushing him (Casey Mears, Tony Stewart, Earnhardt Jr.). He’s had trouble finding drivers to work with on plate tracks over the years because he’s not strong pushing another car and has made mistakes. Johnson is one of the best to ever climb into a stock car, but he’s a feast or famine at the plate track…because it’s a skill. So, while it is true that the best plate driver often get taken out by a big crash not of his making, and a mediocre one can get a win, no win is somehow worth more than another. Unless, of course, the car was found to be illegal after the race and the win stood anyway.

Koelle: I find them even more impressive because they have been an act of survival and for someone to survive they have to be at least decently good. A win is a win anyway no matter who it is or where it is.

The yellow line rule was the talk of the town after Justin Haley was penalized for crossing the line in the Xfinity Series race. Is the rule a necessity?

Henderson: I think you need to ask the drivers what they think; they are the ones who asked for the rule int he first place, and it’s there to keep them safe. Prior to the rule, drivers would race down the straights on the apron to gain time, which worked until they tried to blend back in getting into the corners. As close as the racing can be in the plate era, that’s very likely to trigger a massive crash. True, it’s self-policing in that if a driver does not want to trigger a massive crash he can not go down there, but that doesn’t atop a lot of drivers. I’d leave this one up to them–if they want it, keep it. Is it fair to toss it from Turn 4 to the line on the final lap? I don’t know. At that point, blending is no longer an issue, so maybe that’s the best solution. In any case, the real issue is NASCAR not calling it consistently or correctly most of the time. Penalizing the wrong driver (like one who was forced down there when the guy who body-slammed him should have taken the penalty), or only some drivers (like drivers not named Earnhardt Jr.) makes the rule hard to take.

Massie: The rule would not be a constant problem if NASCAR enforced it consistently. Instead, NASCAR has turned it into its version of the NFL’s catch rule where nobody really knows what is or isn’t legal because the ruling is different every single time. And in the same manner that the catch rule has favored the New England Patriots regardless of circumstances, the yellow line rule always seems to screw over the underdogs. So whether the rule stays or goes doesn’t matter to me. I just want some consistent rules.

Mike Tirico joined the NBC broadcast team as a guest analyst this weekend for their coverage of the race Saturday night. If you could pick a commentator from another sport to join a NASCAR broadcast, who would you nominate and what do you think they would bring to the table?

McLaughlin: I’d really like to see one of the networks hire Cecily Tynan one of the Weather-casters on Action News in these parts. Not to give weather forecasts for race weekends. My guess is that if Ms. Tynan was out of town for the races I’d no longer have to listen to her extremely annoying and nasal cartoon mouse voice as she points to the wrong towns while mispronouncing their names. She’s been around about forever and that Philly has become a bit of a nag. And if I hear her admonish viewers “turn around, don’t drown” one more time, I may in fact launch a boot through the TV screen. Stupid people who drive into fast moving water should drown. It’d improve the gene pool. Uh, what was the question again?

Koelle: Chris Merriman. That guy from ESPN who always does the “Back, Back, Back” during baseballs home run derby. I would just love to see him in the announce booth. I’d also like to see WWE announcer John Layfield or Jim Ross in the booth.

Massie: People hate on him a lot, but I’ve always liked Joe Buck. He always seems to know his stuff and has an exciting voice. He’s called Super Bowls, and I associate his voice with the World Series and baseball in general. FOX has the rights to him, so why not add him to another major sporting event, the Daytona 500? It certainly couldn’t hurt the broadcast. I would also say Al Michaels, but it wouldn’t be as enjoyable because he would never have a chance to say the word “Baltimore.” He sounds like a Lord of the Rings character when he says that word, and somehow manages to work it in even when the Ravens have nothing to do with either teams playing.

Plate wins are not only less impressive than real wins, they should not count as wins at all. If NASCAR’s fans are truly the bloodthirsty boors they appear to be, run a race at Dega and Daytona as non-points exhibitions with participation voluntary. Who cares what the names of the drivers are if the only point is to cause mayhem? And dear readers, that IS the only point of plate racing.

Plate wins are much less impressive than wins at other tracks. They rank up there with fuel mileage and rain wins. More about being in the right place at the right time, having things go your way, and winning the lottery than being the best and kicking the field’s ass. Look at the list of guys that have only won once or twice at restrictor plate races and that kind of proves how cheap an RP race win can be.