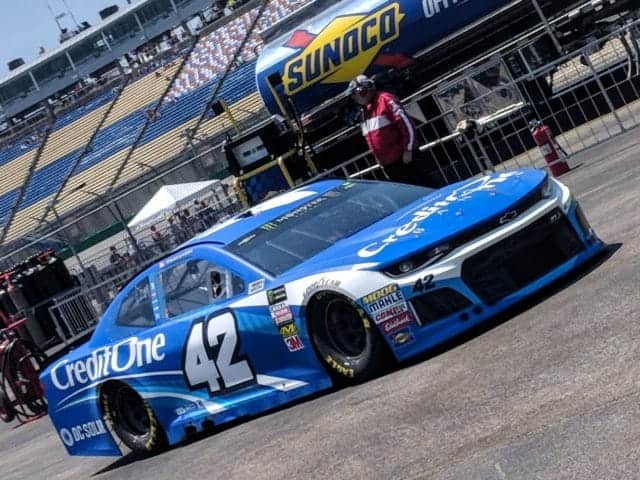 Kyle Larson and Erik Jones led Friday’s (July 13) practice sessions at Kentucky Speedway in advance of Saturday’s Quaker State 400 presented by Walmart. Larson led the first session behind the wheel of his No. 42 Chevrolet while Jones backed up last weekend’s victory by leading final practice in his No. 20 Toyota.

Kyle Larson kicked off the weekend for the Monster Energy NASCAR Cup Series with a 185.867-mph lap around the 1.5-mile track in Sparta, Ky. That slotted him ahead of Ryan Blaney, who turned a 184.653-mph lap.

All 39 cars entered turned at least one lap during the session with Erik Jones turning the most at 36. Matt DiBenedetto turned the least amount of laps during the session at seven. There was a 2.313-second margin between first place Larson and last place Timmy Hill.

In MENCS final practice, Jones led the way with a 187.748-mph lap. Just a week removed from his first career race victory last weekend at Daytona, he edged Blaney, who once again wound up second quick.

Kyle Busch finished the session in third while Ricky Stenhouse Jr. and Austin Dillon rounded out the top-five speeds.

Like in the first session, all 39 drivers entered turned at least one lap. Logano and Denny Hamlin turned the most laps at 40 apiece while session leader Jones turned the least amount of laps at five. There was a 2.630-second margin between first place Jones and last place Garrett Smithley.

Qualifying for Saturday’s Quaker State 400 presented by Walmart is slated for 6:40 p.m. ET tonight on NBCSN. The race itself goes live tomorrow on NBCSN at 7:30 p.m. ET.