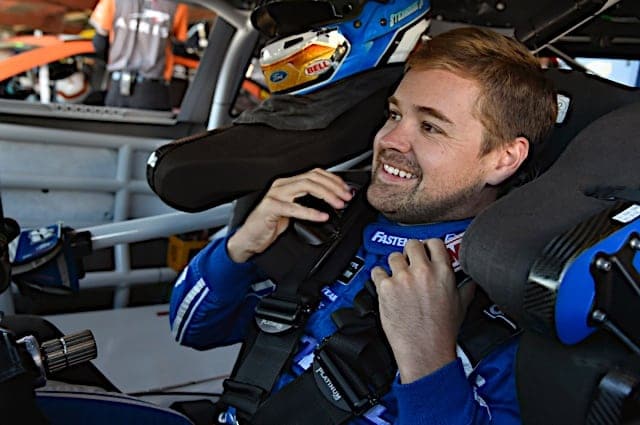 Driving home from work this winter soon after agreeing to come back to Frontstretch, Tom Bowles, owner of the website, and I spent some time on the phone catching up on all the racing happenings that had elapsed between my last column with the site in 2012 and my return this season. Right at the front of that list, and taking a considerable amount of time on that call, was the topic of stage racing.

I’ll be honest…I HATED the concept when it was first announced. I had texted another of my longtime compadres at Frontstretch, Mike Neff, the day the concept was made public, wondering how I was supposed to explain this new level of foreign arithmetic to those that don’t eat, sleep and breathe stock car racing, which between my family and my office is pretty much everybody (and for the record, my coworkers still don’t get it).

But in talking to Tom that night in January, two months after the checkers waived at Homestead last fall, I had to admit…the concept worked. Stage racing worked. In one sense, the math added up. Brad Keselowski didn’t exactly light it up in the playoff races following his dominant performances at Talladega Superspeedway and Martinsville Speedway…and even in that Martinsville race, his finishing result didn’t match the on-track performance. Meanwhile, at race’s end after Phoenix, it was thanks in no small part to those 14 playoff points that the No. 2 team found itself in the final four in Homestead. Rewind all the way back to Martinsville in the spring. Rewind all the way back to Atlanta, the second race of the season. Nearly nine months later, those wins mattered in a very tangible way.

But another less measurable level — 2017 felt a bit different with stage points on the line. It’s not a scientific observation, but more of a feeling I had watching races last season, it did seem like drivers were pushing harder. And it was more evident nowhere than the plate tracks. That’s to be expected. For years, the plate tracks have been the place where drivers would consciously choose to ride in the back and log laps. It wasn’t too long ago that a single-file train of cars 35 deep could be seen at Talladega. Now fast forward to the carnage that was seen on track this past weekend in Daytona, and perhaps the best (unscientific) evidence yet that this new system does work was on display.

It’s been obvious the past few plate races, but it was especially evident after the second big wreck of the evening that Ricky Stenhouse Jr. approaches plate races as must-win events. Bumping in corners, changing lanes rapidly, making contact with rear quarterpanels, the No. 17 has been both exciting to watch, and a menace to competitors.

There was enough gray area in the first big wreck of Saturday’s race to keep from blaming Stenhouse for the 20+ car melee; Keselowski openly stated that Stenhouse did nothing wrong when he ran into him entering Turn 3. Instead, the 2012 series champion focused his ire on William Byron and his blocking while leading. But being front and center of another major storm was a problem for Stenhouse, a driver with a growing reputation on plate tracks. That it took less than 10 laps for him to then wreck Kyle Busch, a wreck that was entirely his fault, cemented said reputation. Stenhouse was audibly dejected on the radio, visibly dejected in the cockpit, and was subject to the loudest cheers of the night when Kyle Larson’s blown tire resulted in the No. 17 finally joining the ranks of the damaged in Daytona.

That dejection, that applause, even the outbursts of both drivers and fans alike on social media afterward, all proved that NASCAR’s new playoff system does in fact work. How?

Let’s assume that for all the carnage, Stenhouse had gone on to win at Daytona, and lock himself into the playoffs. His chances of winning a championship were low anyhow, as his Roush Fenway Racing team has nowhere near the pace to hope to keep up with the “Big 3,” or even the Penske and Stewart-Haas camps that will likely be slugging it out for the final spot at Homestead this fall. But now, factor in that said win came as a result of destroying racecars, of driving 10 feet (or 17, if you will) over his head with no regard for his fellow competitors. Does anyone for one second believe that the Cup field would allow Stenhouse to get anywhere close to sniffing a championship trophy? Hell, Stenhouse has made an enemy of Kyle Busch, the egomaniac driver who struggled to say anything positive about even the ultra-talented Kyle Larson for having the guts to race him hard and put on a badass show at Chicago. That alone would doom his title hopes.

But here’s how NASCAR’s playoff system fits into the equation. It is true that thanks to the playoff format, the chances of a midpack or backmarker team making it into the big dance is far higher than in the previous Chase era. Chris Buescher and Front Row Motorsports made that very situation a reality in the Cup Series, just as Jeremy Clements and his family-owned team did the same in the XFINITY ranks last year. And had Stenhouse won at Daytona this weekend, the No. 17 team would certainly fit that bill, just as they did last year.

The point is though, that even though driving like a wrecking ball could have won Stenhouse a race and a playoff berth, it can’t win him a championship. And no one knew that better than him on Saturday night. Stenhouse knew full well the damage his tactics caused to his reputation, and his team’s chances of doing anything with the remainder of the 2018 season. Anyone watching the broadcast could see it in his eyes. Anyone listening to the radio could hear it in his voice. Stenhouse was the enemy of the Cup garage Saturday night, and is going to be in the doghouse for a while to come.

Seeing this play out is of extreme importance. The most consistent criticism of the Chase/playoffs/whatever NASCAR decides to call it this year has been that, unlike the old Winston Cup system, the 36 races aren’t in fact weighted equally anymore. The regular season does matter, but the playoff races do matter more.

That equality is never coming back, and while the purist rightfully is bothered by that, stage racing has gotten closer to it than I would have thought possible. Winning regular season races matters. Winning stages matters. And while stealing wins with tornado-like violence instead of talent is now an avenue to a playoff berth, it’s not a shortcut to the Cup.

You’re kidding, right? The only thing that should matter is where you finish at the end of Brian’s event. That way you wouldn’t have to explain why the driver in tenth got more POINTS than the winner. And no matter what idiotic idea Brian comes up with, a driver doesn’t need wins to get the championship trophy.

A driver NEVER needed wins to get a championship trophy. All point systems are flawed for exactly that reason. The Latford system was worse, although it was easily fixable without throwing the proverbial baby out with the bath water. A large bonus for winning the race would have fixed the old system and prevented incompetent morons like Ricky Stenhouse from even dreaming of a championship. The fact that it is mathematically possible for a third-rate driver to get into the Playoffs is hardly proof that stage racing or the Playoff system works. It is actually proof that it doesn’t. But it does give incompetent morons like Bryan Keith jobs. And better that he display his ignorance here than in an important role at the drive-thru window where he would otherwise be employed.

You didn’t see the same race I saw. I saw a wreck fest that was clearly created by the win and your in playoff format. Seems a little extreme to wreck 20-30 cars for the chance to be in the TV concocted playoffs. Kyle Busch took another gratuitous slander like “egomaniac” from this author because he raced Larson the way he was raced over a week ago. Why would Kyle or anyone else be happy about Stenhouse’s nonsense. They are driving 200 mph to entertain the fans with their ability to even drive that fast and obviously not for their health. But, since all the money comes from TV nowadays, we have come to expect these weekly wreck fests. Why All of this because in 2003 Matt Kenseth waltzed away with the Winston Cup after winning 1 race? Hardly. Seems like a small adjustment in the scoring system could have pretty much eliminated having Cup champions who only score 25 top tens in a season, if that is what you want. My take is the TV boys had a bad year in 2003 because, as usual, Junior didn’t race up to Kenseth’s standards. Brian France is a disinterested 3rd generational twit and soon he will have lost NASCAR for his entire family. I don’t care about that. Stock car racing will get well after France is gone, I say.

First rule of employment at FS: Whenever you are short on logical arguments, hurl a gratuitous slander at Kyle Busch. It makes Tom Bowles and most of his cult followers happy, even when, especially when, it makes no sense to the overall argument.

That race didn’t “validate stage racing,” it pointed out the weakness of the Roush team, whose cars cannot be compteitive except in the crapshoot of a plate race when all the other cars are handcuffed down to their level.

Reminds me of the immortal words of AL Foyt. “If we’re going to have taxicab races, then let’s get a bunch of taxicab drivers down her to drive in them.” Seems we did just that.

Benny Parsons did drive a taxi.