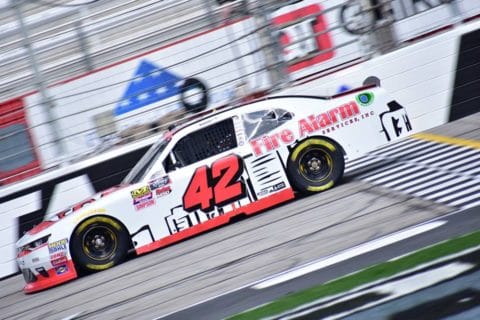 It seems like every weekend John Hunter Nemechek races, he gets better. Friday night (July 13) was no different for the young driver as he keeps improving while learning the ropes of the NASCAR XFINITY Series.

Driving the No. 42 Chip Ganassi Racing Chevrolet, Nemechek was able to battle up front at Kentucky Speedway. Armed with a team that had won the last two XFINITY races, both the speed and talent carried over from Monster Energy NASCAR Cup Series regular Kyle Larson.

Even Kyle Busch was no match for Nemechek. The youngster blew by the No. 18 Toyota, taking the lead toward the end of stage two and steamrolling to a stage win. As the night continued, it seemed like Nemechek was a favorite to reach Victory Lane … and then, the voltage in his night went away.

A battery issue plagued everything that was going right for the team.

“We have fast cars each and every week, we’ve just got to have a little bit of luck on our side,” said Nemechek. “We ended up having a battery issue there, had to come down pit road. Lost a lap, lost all our track position, luckily we ended up seventh or something like that. We were able to drive back up through there.”

Nemechek also made contact with a few rivals throughout the course of the night. The most notable involved tapping Brandon Jones to start a backstretch wreck that totaled Jones’ No. 19 Joe Gibbs Racing Toyota.

“Hate it for the No. 19, didn’t mean to get into him,” he said. “I just got loose underneath him on those restarts. Definitely stings but overall good night, good learning night, and we’ll move on.”

Although the chance for Nemechek’s first XFINITY victory never materialized, he was able to continue on and learn something from tonight. In the end, Nemechek ended the race in seventh which was his fourth top-10 finish of the 2018 season. That puts him 13th in the XFINITY standings, one spot out of the playoffs despite competing in just 10 of 17 events.

Karma is a b*tch John Hunter.