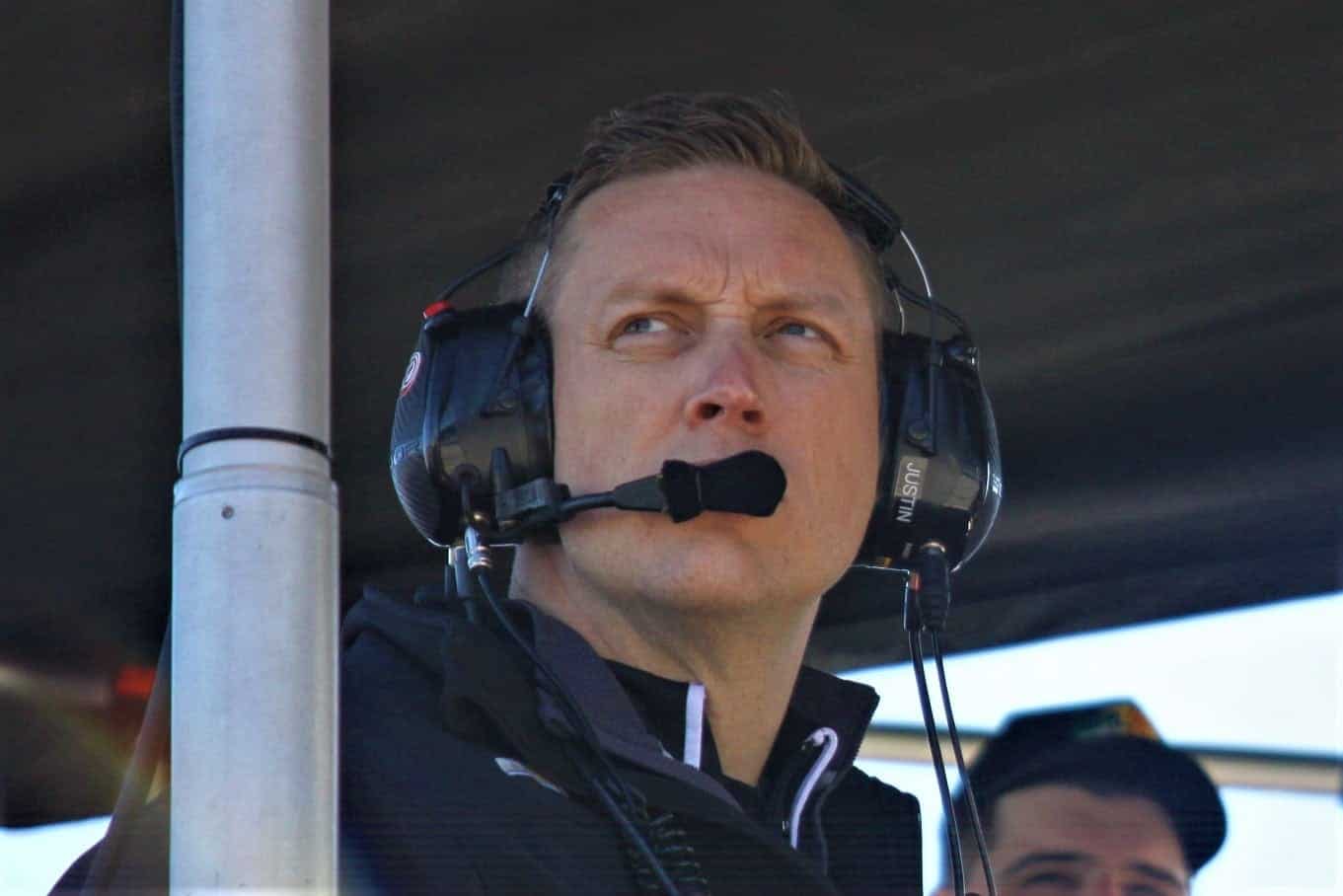 For the second straight week the Cup Series races will be held on Saturday night. The action at Daytona last weekend saw most of the field involved in incidents. This weekend’s race will likely be less catastrophic, but there will still be many challenges facing the race teams. Fresh pavement, hot temperatures and different banking are among the challenges facing the race teams on Saturday night.

Justin Alexander, the crew chief of the No. 3 car, will touch base on many of them in this week’s edition of Tech Talk. After rolling his car into the trailer at Daytona, which many teams couldn’t, he turned his attention to Kentucky Spedway. The varied banking in Turns 3 and 4 versus Turns 1 and 2 will determine what kind of lap times the teams can run. Braking temperature can not only impact slowing the cars but that can also impact tire durability. Look for the tires to be a challenge, as well thanks to the relatively new racing surface.

Mike Neff – Saturday night was the traditional midpoint of the season. Some would call it a race, some a demo derby. How did you view your evening in Daytona?

Justin Alexander – It was a crazy race, that is for sure. There were a lot of wrecks and a lot of crazy things happening. For us, as the No. 3 team, we did a lot of work going into Daytona to work on handling. We knew handling was going to be an issue. We wanted to try to keep speed in the car as well. We did some work on the body, suspension, chassis and setups and a little bit of everywhere. We had a really good car. Austin [Dillon] was really happy with the car, the first part of the race, before we got damaged. He said he could suck up good, he had good speed and it handled great, so we were really pleased with that. Unfortunately, we got caught up in one of those mid-race wrecks. I’m not sure when it was. There were probably two or three that we were actually involved in. Tore the nose up pretty good, tore the quarter up pretty good, but we did fix it up halfway decent. It wasn’t great but the car did have somewhat decent speed. All-in-all, it was a decent night. We got out of there with a top 10 and that was about all we could ask for there.

Neff – When you get into a situation where 25 cars were in the one wreck so there were probably 30 cars on the track that had some kind of damage to them. Is it more imperative to try and get closer to the front, knowing parts could legitimately fall off of cars and there is more danger of running over something?

Alexander – No, I don’t think you worry about that so much. Things do fly off of cars every now and then, but more often than not it is barebond or something silly that doesn’t really impact the cars. The biggest thing is trying to stay up with the draft. You don’t want the lead draft to get away, especially with a damaged race car, you fall susceptible to falling back too far and not having enough speed so you lose the draft. You end up going a lap down. That is your only real concern. Outside of that, it is really just the strategy you have. If you think there are going to be more wrecks and you want to hang back on the tail end of things and not get into them, that is one strategy. Another is you can go up and race with the leaders and try and get stage points and try and maintain track position. If you do that you end up potentially getting involved in wrecks. I think, depending on your strategy and depending on how your car is, determines where you end up running there.

Neff – We are heading off for another Saturday night race, this time in the Bluegrass State. With Kentucky recently repaved, is it to the point where it is still ultra smooth so that you can be super aggressive with keeping the car down on the earth?

Alexander – It still fairly smooth, relatively speaking, compared to some of the other tracks we go to. It was reconfigured in 2016 and then repaved in 2017 on top of that. It is fairly smooth. There are one or two small bumps, nothing crazy. You can run things pretty aggressive there with the smoothness of the track. The different bank angles in both corners present a little bit of a challenge. That is some of the biggest things we deal with there.

Neff – We’ve all seen the commercials the last couple of weeks talking about how treacherous Turn 3 is at Kentucky. You mentioned the different degrees of banking in the corners. Is Turn 3 your biggest focal point when you get to Kentucky?

Alexander – I would say so. The entry to [Turn] 3 is what causes a lot of issues there. Drivers tend to be loose in there. We work a lot on trying to fix that entry into three. If you can get set up on entry into three it will give you a good line to get through three and four, along with getting off of four, and carry a lot of momentum down the frontstretch. Entry to three is where it all starts, at least in that corner, and with it being pretty flat it is something we work on pretty hard in practice.

Neff – The tire compound for this weekend will probably be determined by the freshness of the asphalt. Heat in the tires on a new pave is usually an issue that causes them to bring a hard tire to the track. Is that still the plan at this point for this weekend?

Alexander – Yeah, we are using the same right side tire as we ran there last year. They are bringing a new left side tire for this year. We’ll see, in the past some teams have scuffed tires to try and eliminate some of the blistering and other issues that we’ve seen in the past. Some teams choose not to scuff them. I think that Goodyear has done their homework, hopefully, so we won’t have any tire issues to worry about during the race. Hopefully that won’t be an issue and we can just focus on racing.

Neff – Braking up there, since it is freshly repaved and you have a lot of grip, is it any kind of an issue at all or do you just need to get it whoa’d up to come into the pits for stops?

Alexander – Braking at Kentucky is actually some pretty heavy braking loads for a mile-and-a-half track. It is one of the heavier braking mile-and-a-half tracks that we go to, just because of the way the corner entries are configured and the new pavement, and the grip, with the speeds that we’re running. You’ll see a lot of guys running an opening in the brakes and trying to keep fresh air to them and keep them cool. Kentucky is really hard on brakes and that is something we definitely pay attention to and watch out for throughout practice.

Neff – Last weekend we saw a lot of drivers struggling after the races, especially after the XFINITY race, with the heat and humidity. It looks like it will be warm and humid Saturday night in Kentucky. Is there additional care being taken for your driver’s comfort to make sure he makes it thought the 400 miles in good shape?

Alexander – Yeah, we do everything we can. He has an AC in the car with cool air to his helmet. We give him fresh air from the right side A-post window. The right side A-post window. We do everything we can to keep him as cool as we can, in the car, without sacrificing too much aerodynamic performance. Certainly keeping the driver cool is the number one priority because, without him, we won’t be going anywhere. Luckily Austin has been really good. He’s been working out a lot. He’s an athlete. He takes to these hot tracks and conditions fairly well. He rarely gets drained. He rarely gets hot or worn out as some of the other drivers do. His conditioning is pretty good and pretty on point. That is one benefit that we have with him. Hopefully that isn’t an issue for us but we certainly do take some measures to keep him cool and comfortable.

Neff – Last week we saw two Chevys start on the front row. Chevy cars have started to make a little more noise in these races. Do you feel like you are getting a better handle on what the new Camaro is taking to be fast?

Alexander – We have certainly made some progress over the last few months. Speedway racing is a different animal. Those Hendrick cars were sitting one-two in qualifying and that is pretty good, which showed they had speed. They’ve had speed at a lot of the plate tracks though. I do think we made a step at catching the Fords at speedways since Talladega. Certainly on the plate tracks and then, on the other tracks, we have definitely made some gains. We are still not where we need to be but we are making progress and it is slowly starting to show with the way some of the Chevys are running.

Neff – Are you still hitting the wind tunnel about every week?

Alexander – Oh yeah, as much as we can. We like to get in every week if we can. The more we can get in there the more development we can do on the bodies and put more downforce on the cars. That is ultimately what we need to work on and continue to work on, with a lot of other things too. That is one key area where we spend a lot of time.

Neff – How much of a smile did you get on your face when you saw that Toyota is bringing the Supra back so you know that those guys are going to be dealing with a new body soon?

Alexander – I haven’t seen a Supra in a long time. It will be cool to see one of those on the street. As far as their bodies, they’re going to do what we did. They’re going to have the same challenges that we have with this new Camaro. Hopefully, we’ll get a leg up on them on some playing field at some point.

Neff – Since we are racing on Saturday night for the second week in a row, what plans do you have for your day off?