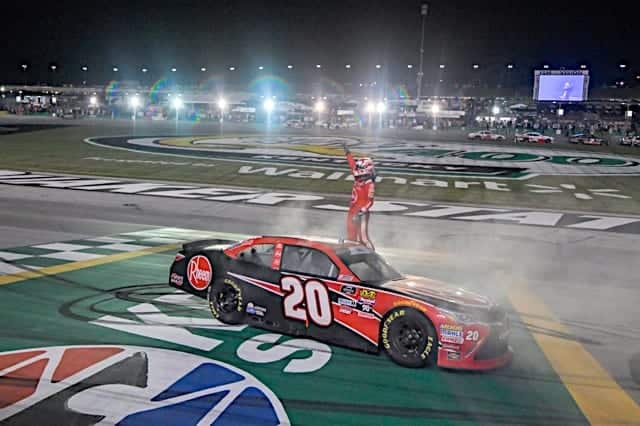 In NASCAR XFINITY Series practice at Kentucky Speedway, Christopher Bell looked to have a car that could contend for the win. But in the final round of qualifying Friday (July 13), the No. 20 car went for a spin, forcing Bell to start that night’s ALSCO 300 from the rear.

But it didn’t take long for Bell to charge his Joe Gibbs Racing Toyota through the field. At the end of the opening 45-lap stage, the No. 20 sat in 14th. However, stage two is where the car made significant gains, with Bell jumping all the way up to seventh.

Over the final 110 laps, this rookie kept coming.  He overcame a handful of restarts, then avoided lap traffic in order to have a shot at the victory. With 17 laps to go, he passed Justin Allgaier, then held off Daniel Hemric in the race to the checkers. It was Bell’s second XFINITY victory of the 2018 season.

“Starting in the back there, I knew my car was going to handle a little bit different than what it would at the front and all throughout practice I knew that we were – my car that was capable of racing for the win, but when we started in the back, it just drives so different back there,” Bell said in Victory Lane. “Next thing you know, we’re up there racing at the front and it’s driving totally different and I keep telling myself, ‘We’ve got a shot at this thing.'”

It might be Bell’s first victory since late April but the driver remains one of the top title contenders for the championship. Self-admittedly, his rookie season has been good when he doesn’t crash. In Victory Lane, he thanked the No. 20 team for sticking with him after making a “couple” mistakes over the past few weeks (Bell failed to finish at Pocono last month after wrecking).

Despite a seventh-place effort, John Hunter Nemechek had his best XFINITY race to date on Friday night. Even Kyle Busch said he had the best car.

With 12 laps to go in stage two, Nemechek was able to drive his No. 42 Chevrolet past Busch and hold on for his first XFINITY stage victory. He was going to be a threat to win going into the final stage.

The final stage is up next on @NBCSN and the @NBCSports app: https://t.co/593lUV9Jw2 pic.twitter.com/PYZZbwj3Yx

He remained near the front throughout the first part of the final stage, slated to drive off from third position on a late restart. However, that’s when luck ran out. The No. 42 car lost power forcing the tow truck out, pushing Nemechek to pit road. The team re-fired the engine, but the damage was done as he lost a lap.

After a few more cautions fell, Nemechek got that lap back. During the sprint to the finish, he charged from 19th to seventh, his fourth top-10 effort in 10 races this year. It was a valiant effort despite not making it back to the lead.

Nemechek was looking to make it three in a row for Chip Ganassi Racing after Kyle Larson won the previous two XFINITY events at Chicagoland Speedway and Daytona. If the team continues to field fast cars for the young hotshoe, he will find the Winner’s Circle.

Friday’s race at Kentucky marked the halfway point of the XFINITY season. But it must feel like three seasons in what has been a nightmare for Michael Annett.

Through the opening 17 races of 2018, Annett has zero top-10 finishes, earning a best result of 11th at Daytona last weekend. In an exclusive interview with Frontstretch in June, he admitted the No. 5 team has underperformed. At Kentucky, it looked like those frustrations had been taken to a new limit.

With just over 50 laps to go, Annett dumped Joey Gase in Turn 3. Gase was having a respectable night for an underfunded Go Green Racing but his race was ruined. The No. 35 was sent to the garage, finishing 33rd.

Unfortunately we got dumped and our night is done. #Alsco300 pic.twitter.com/jUwQR9w7Ir

Annett, though a fierce competitor, isn’t known for being immensely aggressive on the racetrack. But after these two were going at it for a couple laps, he straight up turned Gase.

Let’s face the facts. Annett drives for JR Motorsports, arguably the best XFINITY Series team in the garage. His teammates Justin Allgaier and Tyler Reddick have visited Victory Lane this season while Elliott Sadler has led the points most of the year. Annett, on the other hand, sits 14th in points, 40 behind Ross Chastain, who is currently on the playoff cutline. He sits just behind John Hunter Nemechek, who has competed in only 10 of 17 races.

But remember, just last week Annett signed on to a multi-year deal to remain with JRM. Why? He has the funding, which leads right into our “ugly” section this week.

Everyone knows how lopsided NASCAR’s economic model is. But this week it bit Kaz Grala, who is now eliminated from playoff contention with Fury Race Cars.

After starting the season with JGL Racing, Grala was let go from the No. 24 ride when neither he nor the team could find funding. He had NETTTS as his primary sponsor but it wasn’t enough to overcome a situation where the owner was also fighting health concerns.

In two weeks, he made a leap of faith and joined Fury Race Cars owned by his father, Darius Grala. When the No. 61 team took to the track at Charlotte Motor Speedway the end of May, they weren’t messing around, placing 10th.

At the time of the move, Grala knew he had Charlotte, as well as Pocono, Michigan and Iowa under his belt with sponsorship from NETTTS. The company put all their efforts forward in those four races that they were going to spend the rest of the season.

On the racetrack, the strategy worked. At Pocono, the No. 61 finished a respectable 16th. Then, Grala started from the rear at Michigan after qualifying got rained out. He fought to the front and led five laps before finishing 12th.

With a 10th-place finish at Iowa, he secured sponsorship with Kiklos for Chicago, but had an electrical issue on lap 1 that hampered his efforts. Grala rebounded for a fifth-place finish at the World Center of Racing (Daytona), where things were looking up… until this week.

Unfortunately I won’t be racing this weekend @KySpeedway. We were unable to secure enough sponsorship to make it to the track. ?

On an exciting note, we HAVE secured the sponsorship to run my home race @NHMS next weekend! ?

On Tuesday, Grala announced through that Twitter post he would miss the race at Kentucky. The lack of funding officially eliminated the 20-year-old from playoff contention. In six races since joining the No. 61 team, he had jumped five positions in the points to 14th and appeared right on track for the postseason.

Unfortunately, it’s a day and age where money buys rides and NASCAR is a rich-man sport. Hopefully, Grala can find some backing going forward because he could potentially be one of NASCAR’s next stars.

The big teams came out to play Friday night, which didn’t allow for a darkhorse to have a standout performance. But anytime a small, underfunded team can get three cars in the top 21, it’s a solid night.

That’s exactly what JD Motorsports did. Ross Chastain, who is in the middle of a career year, led the train of JDM Chevrolets in 17th. Chastain backed up a top-10 performance at Daytona and was a solid lead-lap performer all night.

It’s been feast or famine for teammate Garrett Smithley this year in terms of top-20 finishes. However, a 19th-place effort at Kentucky is solid on a mile-and-a-half racetrack. Dating back to Charlotte, the third-year driver has three consecutive top 20s on intermediate tracks.

Finally, BJ McLeod finished 21st for JDM, beating out his own two teams that he owns at BJ McLeod Motorsports by a few positions. It’s his best finish in four starts for JDM this season.

Finishing around 20th isn’t sexy, but it’s what some teams need to do to survive. With limited funding, it’s surprising JDM has gotten some of the results it has with used tires, old equipment and few people. The sport needs teams like this to excel.

Whenever Kyle Busch is in an XFINITY race, he’s the favorite, winning 92 of these events in the past. But after getting passed for the lead by Daniel Hemric, a caution flew with 52 laps to go and Busch brought the No. 18 down to pit road for fresh tires. Over the last quarter of the race, he was able to rebound to third but couldn’t find the speed to get back up front.

The rest of the Cup drivers were a non-factor all night long. Paul Menard was the only other double duty driver in the top 10 for Team Penske, running ninth. Meanwhile, Ty Dillon ran outside the top 10 the entire race and could only pull out a 14th-place effort.

“It just seemed like we had speed right off the truck and that carried through the whole weekend. That makes it a lot easier when you unload good and you can fine-tine and tweak on it, instead of having to do wholesale changes.” – Ryan Reed, finished eighth

“It just really bothers me that we haven’t been able to capitalize for so many races in a row. It doesn’t matter what car I’m in. Whatever happens in stage three everyone gets the red mist and it just feels like we’re a bystander.” – Austin Cindric, finished 10th

“This has got to be a kill or be killed situation on these restarts. You really have to be so tight to the guy that’s in your inside when you have an outside restart like that.” – Brandon Jones, finished 36th after wrecking

Overall, the parity in this race was outstanding and it could be a preview of Homestead in November. Bell joins Allgaier as the only XFINITY driver to have multiple victories this season. Hemric has proven that he has the consistency to run with those two, as well as Custer and Elliott Sadler.

The championship appears certain to be a battle between these five drivers. But that means at least one of them will be left out of the Championship 4.

"It's going to come down to @HomesteadMiami, and it's going to be a good one."@CBellRacing came back from a spin in qualifying to win at @KYSpeedway, building momentum to make a deep playoff run all the way to the championship race. pic.twitter.com/dOqIzUVktt

The series makes its annual trip to the Granite State next weekend, hoping to stop Cup Series drivers at New Hampshire Motor Speedway. The last time someone not pulling double duty went to Victory Lane there was David Green in 2003 competing for Brewco Motorsports.

The green flag waves shortly after 4 p.m. ET. with coverage provided by NBCSN. Kyle Busch is the defending winner of the event.