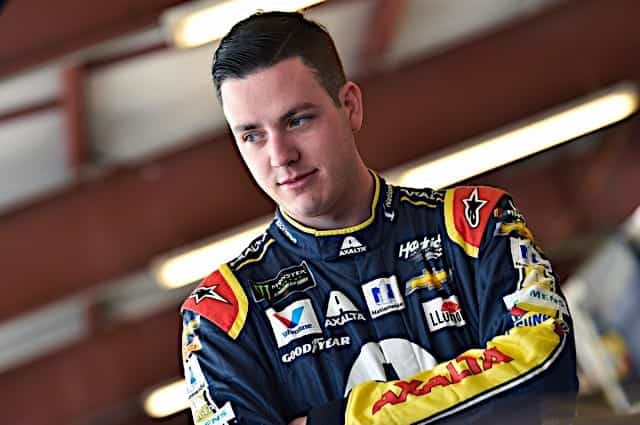 It was shaping up to be a great night for Alex Bowman and the No. 88 Axalta Monster Energy NASCAR Cup Series team. Running his 100th career start, he had high hopes entering Saturday’s (July 14) Quaker State 400 at Kentucky Speedway. Running midpack late in stage one, he passed the leader to remain on the lead lap after pitting late during green-flag pit stops.

As stage two began, Bowman only took two tires alongside Kurt Busch. While Busch ran away and led some laps, Bowman remained inside the top 10. Tire troubles for Ricky Stenhouse Jr., the man directly behind him in the playoff hunt also had Bowman sailing toward a solid race.

Too bad Lady Luck had other plans.

Suddenly, the No. 88 car had a tire go down entering Turn 3 on lap 109. Sparks emitted from the Hendrick Motorsports Chevrolet and then Bowman went straight into the outside wall.

As the No. 88 came down pit road, crew members began to survey the damage and ultimately reported to crew chief Greg Ives they couldn’t fix it. Just like that, Bowman’s night was over, a last-place finish also damaging his playoff hopes.

“I’m fine, Hendrick Motorsports builds good safe race cars,” said Bowman. “My Hendrick carbon seat held up well, everything is good. Unfortunate we blew a tire. Kind of looked like it might have broken a brake rotor before that, but it’s hard to say because you break the brake rotor when you hit the wall anyway, so part of it. We will move on and evaluate what happened.”

The tire going down would result in Bowman’s first DNF of the season and only his 13th DNF of his MENCS career. It’s actually his first trip to the garage early since 2016.

“We were the last guy that didn’t have any DNFs; we made it one week farther than everybody else,” added Bowman. “It’s a bummer. We will move on from it and go to the next one.”

Stenhouse’s tire troubles (the No. 17 was two laps down at the time of this wreck) minimized the damage to Bowman’s playoff hopes. He was 19 points ahead of Stenhouse entering Saturday night; the margin was only cut to nine.