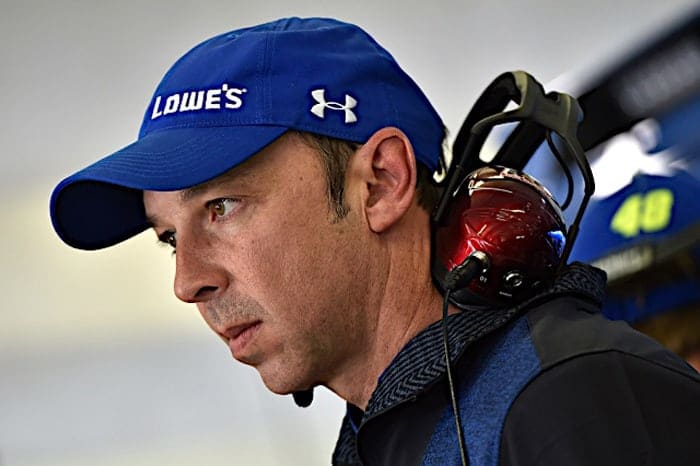 Jimmie Johnson has enjoyed plenty of success with longtime crew chief Chad Knaus. Despite a difficult 2018 season, the seven-time champion driver/crew chief duo will continue together beyond this year.

Knaus, whose contract with Hendrick Motorsports was set to end at the conclusion of the 2018 season, told ESPN’s Bob Pockrass in an interview he signed a two-year extension recently. He’ll continue working with Johnson and the No. 48 Monster Energy NASCAR Cup Series team through the 2020 season.

Johnson is mired in the longest winless streak of his career. However, despite the recent struggles, time has not strained the chemistry between the ultra successful duo. Knaus has been Johnson’s crew chief since he began racing in MENCS full-time in 2002.

“Obviously, Jimmie and I, although we are going through a bit of a slump right now, we have a great time racing together,” Knaus told ESPN reporter Bob Pockrass. “We have a long relationship and enjoy everything No. 48. … It was pretty easy [to stay].”

Johnson’s tied for sixth in MENCS history with 83 victories. He also has seven titles, a total which ties him with Dale Earnhardt and Richard Petty for the most all-time. Knaus stated that the allure of breaking that record was a factor in his decision to return.

“In years past, it was maybe more just focusing on next week,” he said. “But I’d be foolish and lying to not admit the fact that to get eight championships, to put Jimmie on a pedestal by himself at the top of the standings with championships is a huge desire and something I definitely want to try to achieve.”

I guess we’ll never get to see what Johnson can do with someone different. I’ve been hoping we would.
Considering that the 48 backed into championship 7 it’s hard to imagine them getting number 8.

Not unless Brian puts the Golden Horseshoe back in the usual place and that`ll cost Mr. H a lot more money.