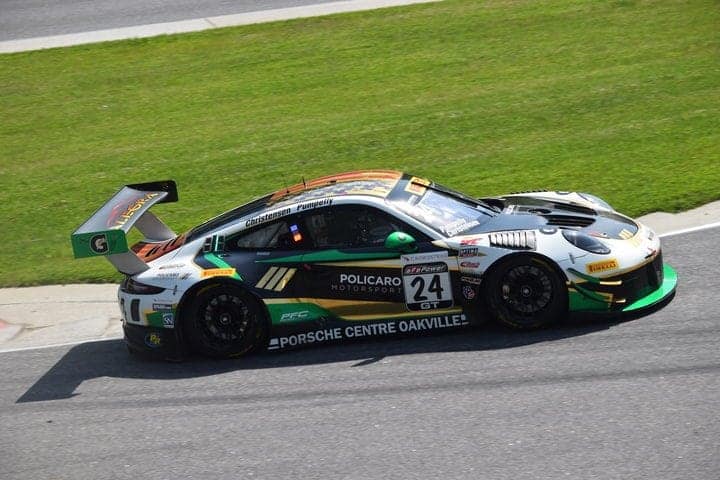 Alegra Motorsports’ Michael Christensen won the pole for GT SprintX Race No. 1 Saturday morning (July 14) at Portland International Raceway.  Christensen’s lap at an average speed of 101.145 mph will stand as a track record since Pirelli World Challenge has not raced in Portland since 2005.

Christensen’s lap was a quarter of a second faster than the Ferrari of R. Ferri Motorsport’s Toni Vilander.  Vilander turned in his best time in the closing minutes of the session to move up from fifth.  CRP Racing’s Daniel Morad will start third on the grid in his Mercedes, followed by K-PAX Racing’s Rodrigo Baptista, newly promoted to the Pro division in his Bentley.  Àlvaro Parente will start fifth in the second Bentley.

A notable absence from the weekend is the Lone Star Racing No. 80 Mercedes.  Mike Skeen was judged to be at fault for an incident that occurred at Lime Rock back in May.  Since he was already on probation for contact with Parente on the opening lap of Race No. 1 at VIR, Pirelli World Challenge officials gave Skeen a one-race suspension.  As a result, the team chose not to make the trip.

In GT Pro-Am, TruSpeed AutoSport’s Parker Chase drove a little bit deeper into the braking zone for the Festival Curves than his opposition.  That allowed him to carry more speed and claim the class pole with a lap at 99.924 mph, good enough for sixth overall.

Chase’s lap was nearly four-tenths of a second faster than TR3 Racing’s Wei Lu in his Ferrari.  Dream Racing Motorsports’ Lamborghini for Yuki Harata was third.  In the Am class, Caesar Bacarella, fresh off a not-so-good race in Daytona, was fastest with a lap at 98.723 mph, good enough for 11th overall.  Bacarella was nearly a half-second faster than Rich Baek in the Vital Speed Motorsports Ferrari.

GT SprintX Race No. 1 is scheduled to go green at 4:10 p.m. EDT.  The race will be streamed live at World-Challenge.com.