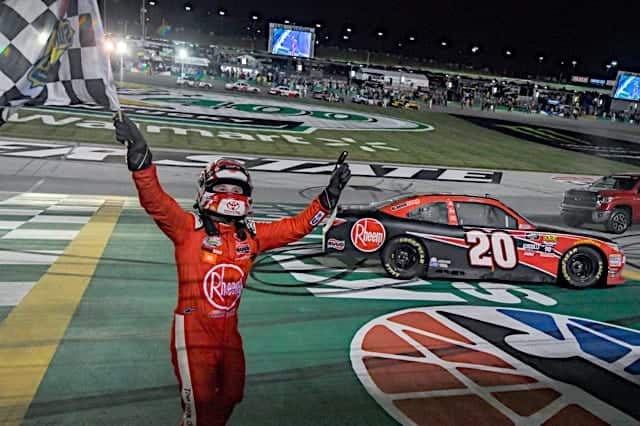 Kentucky Speedway was simply the Martin Truex Jr. show. Leading 174 of 267 laps, his No. 78 Toyota was on cruise control most of Saturday night (July 14) in the Quaker State 400.

Two-tire pit strategies, like on most repaves produced short-term boosts for drivers like Brad Keselowski and Kurt Busch. But in each case, it wouldn’t take long for Truex to methodically reel his competitors in and mow them down. It’s the second straight win for him at this 1.5-mile oval; he’s won all six stages and led over 300 laps at Kentucky the past two seasons.

Most important of all, this win was the first for him at a 1.5-mile oval this year. It’s the latest sign this team is ready to match Kevin Harvick and Kyle Busch blow for blow in the Monster Energy NASCAR Cup Series championship. The past six weeks, Truex has won three times; he’s led 287 laps during that stretch.

That puts him at four wins, 13 top-five finishes and four poles through 19 races. Where was Truex at this point in 2017? Three wins, seven top-five finishes and just one pole. Sure, he was leading the points, a feat he won’t repeat this year (Kyle Busch is light years ahead). But with the number of playoff points he (and the other top challengers) have accumulated thus far will a regular season points title move the needle? It won’t.

The hottest driver in the sport right now, it seems like Homestead-Miami Speedway is looking more like a foregone conclusion for Truex. And while two (maybe three) big challengers stand in their way, the No. 78 Toyota team may again be the most well-rounded, best team on 1.5-mile ovals when it gets there. – Tom Bowles

In the final round of qualifying on Friday at Kentucky, Christopher Bell went for a spin, flat spotting all four of his tires. The No. 20 team put on a pair of stickers, having to start in the back.

But Bell sped through the back half of the field, finishing the opening stage in 14th. He next cut the deficit from 14th to the lead in half, finishing stage two in seventh. Then, as stage three progressed, the No. 20 rose to the top of the leaderboard.

With 17 laps to go, Bell passed Justin Allgaier for the race lead with Daniel Hemric in hot pursuit. The two young drivers battled it out for the win, but Bell was able to weave in and out of lapped traffic a tad better, inching his way to the finish line ahead of the No. 21 car.

Hemric finished second, though picking up his eighth consecutive top-10 finish. After leading 111 laps, Kyle Busch was third, while Allgaier and Cole Custer rounded out the top five.

With nine races to go in the regular season, Hemric and Elliott Sadler are tied for the championship lead. Custer is three markers back, Bell 17 and Allgaier 39. Those five drivers have been the best XFINITY teams this season, and on Friday, four were able to finish inside the top five, while Sadler ended the night in 12th after getting in to the wall.

Four of these drivers will likely be competing for the championship in Homestead, but which one will be left out? Right now, Sadler’s in a slump while the remaining quartet look ready to battle all the way down to the season finale. – Dustin Albino

After a string of bad luck in recent races, Ben Rhodes has finally put a couple solid finishes together, including a win at Kentucky Speedway Thursday night (July 11). The victory puts the No. 41 team in the playoff field, provided there aren’t four different winners in the next four races. A no-tire pit road call, combined by a momentary stall by then-leader Stewart Friesen was just what the doctor ordered to give Rhodes the track position to grab his first 2018 victory. It’s the first for ThorSport Racing since changing manufacturers from Toyota to Ford this season.

Rhodes joins Johnny Sauter (four wins), Brett Moffitt (three wins), Noah Gragson and Justin Haley (one win apiece) to make up the current Truck Series playoff field. Only four races remain to set the playoff field, and unless a driver outside the top eight (think Todd Gilliland) can find their way to Victory Lane, the five race winners will be joined by Friesen, Grant Enfinger and Matt Crafton, who currently sits on the bubble with a 79-point advantage over Myatt Snider.

With all of that said, Eldora, Pocono, Michigan and Bristol bring drastically different challenges that have the potential to surprise and really shake up the playoff field. It’s certainly something to keep a close eye on over the next several weeks. – Beth Lunkenheimer

With 100 laps to go, it was going to take a wild one for Gus Dean to find ARCA Victory Lane. Elko Speedway delivered.

Dean, who alongside Joe Graf Jr. stayed out on a lap 59 caution on old tires, found himself two laps down inside of 100 to go after he spun around on lap 153, a victim of overly worn tires. However, a rash of late-race cautions made that tire strategy pay off; coming from 11th, Dean ran down Chase Purdy. Then, on the final restart on lap 246, he drove hard under Graf, bumping to a lead he’d never relinquish.

Dean’s win came in a Chevrolet, the first non-Toyota entry to win an ARCA race in 2018. Christian Eckes, Graf, Riley Herbst and Natalie Decker rounded out the top five.

Purdy escaped injury after a scary late-race incident; on lap 241, his car literally exploded in Turn 4 after a broken driveshaft ignited oil in the rear end of the car, per a report from arcaracing.com. Purdy, who was slammed hard by a spinning Eddie Fatscher while on fire, managed to get out of the car under his own power before fire crews arrived.

Verizon IndyCar Series: Nothing Like Home for Robert Wickens

Robert Wickens has lit a fire for the Verizon IndyCar Series in a way much needed for the series in 2018: A hot rookie with speed.

His opening campaign kicked off wildly in St. Petersburg, a dominating run that ended with a crash out of the lead in Turn 1 from Alexander Rossi. From there, he earned a podium at his first oval race in Phoenix before grabbing fourth in Birmingham and ninth in his first Indianapolis 500 start.

But perhaps nothing was more special for the Canadian out of Schmidt Peterson Motorsports than Sunday (July 15) at the Toronto street course. That’s where the No. 7 drove to the podium in his home race.

“I’m not an overly teary guy but that was really cool,” Wickens said.

Wickens’ race started in the 10th spot and was upward from there. His SPM teammate and fellow Canadian James Hinchcliffe was in tow for much of the 85-lapper and came home fourth. But for the countrymen who started the event (along with Zachary Claman De Melo) it was special to have someone populate a spot on the podium.

And needless to say, Wickens was proud to be that driver.

“This whole week has been a whirlwind of emotions,” he said. “To stand on the podium for my first professional home race, I couldn’t ask for anything better.”

Scott Dixon won the race as he added on to his lead in the championship standings. – Zach Catanzareti

Portland International Raceway saw four interesting touring car races on the 1.97-mile circuit last weekend.  They all had their ups and downs.

In TCR, it was once again a battle between RealTime Racing’s Ryan Eversley and the two Bryan Herta Autosport Hyundai i30 N TCRs driven by Michael Lewis and Mark Wilkins.  Race No. 1 saw Eversley lead convincingly early, but he was balked by slower TCA traffic.  That allowed the Hyundais to pass and Lewis to win.  Race No. 2 saw Wilkins unable to start due to fuel pressure issues.  Eversley managed the traffic better and took a sweet victory.

TCA saw Tech Sport Racing’s Jeff Sexton sweep both races in his Subaru BRZ tS despite a hood latch issue.  The second race in particular saw a great duel between Sexton and teammate Eric Powell.  Late in Race No. 2, Powell locked up and missed the Festival Curves, allowing Sexton past.

The TC class was dominated by Vesko Kozarov.  Race No. 1 on Saturday saw the Russian racer dominate with more than a second of pace on the field.  That led to Pirelli World Challenge officials adding 25 kilograms (approximately 55 pounds) to Kozarov’s Nissan 370Z.  On Sunday, Kozarov looked dominant again, but had an off-course excursion that dropped him to third.  Team owner Lara Tallman insisted that the off-course excursion was the result of braking issues caused by the last-minute weight addition.  Kozarov then made up a nine-second deficit and regained the lead with three minutes remaining to sweep the weekend. – Phil Allaway