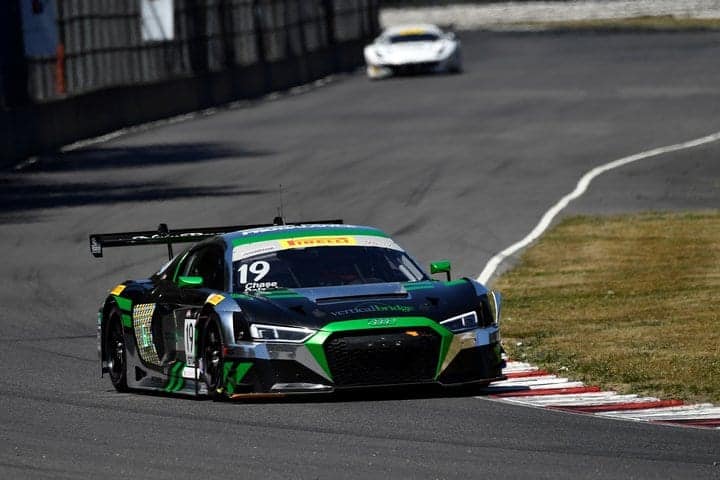 TruSpeed AutoSport’s Pro-Am pairing of 17-year old Parker Chase and veteran Ryan Dalziel claimed overall victory in Sunday’s GT SprintX Race No. 2 at Portland International Raceway as part of the 58th Rose City Races.  PFAFF Motorsports’ Wolf Henzler and Scott Hargrove won on the road, but were penalized two positions a couple of hours after the race for illegally gaining positions in the Festival Curves by cutting the course.

“It’s been a really good weekend for us,” Chase told Pirelli World Challenge’s Ryan Myrehn after the race, but before the penalty to the PFAFF Porsche was assessed.  “We knew coming into the weekend that it was going to be good for us, but I don’t think we thought it was going to be this good.  I think we should have had the overall win since somebody took the short way through [the Festival Curves] and got in front of us.  One got a penalty and one didn’t.  Ryan [Dalziel] did a good job and handed me a good car.  It was awesome.”

The situation that led to the penalty occurred on a restart from the only full course caution of the race.  Dream Racing Motorsport’s Yuki Harata ran into the back of R. Ferri Motorsport’s Toni Vilander and spun out, hitting Henzler in the process.  The crash forced a number of drivers to shortcut the chicane in order to avoid the crash.  Henzler was found by officials to have gained three positions by taking to the concrete to avoid the incident.  He voluntarily gave back one of the places, but not all three.

R. Ferri Motorsport’s Miguel Molina won the pole by virtue of turning in the fastest lap during Saturday’s Race No. 1.  On Sunday, Molina drove off and opened up a decent gap over the Pro-Am TR3 Racing Ferrari driven by Jeff Segal.

It was once the pit window opened that things changed.  A couple of teams stopped as soon as the window opened.  However, before everyone stopped, CRP Racing’s Daniel Morad made contact with the GT Cup entry of Ryan Hardwick exiting the Festival Curves.  Morad went hard into the tires while Hardwick spun into the grass.  The result was the race’s one and only full course caution.

The yellow caused quite a bit of chaos.  Those who hadn’t done their mandatory pit stops under green pitted here.  Then, there were issues with the wavearound.  Ultimately, the crash resulted in an 18-minute caution that took up nearly one-third of the race.

When action resumed, TR3 Racing’s Wei Lu ended up with the overall lead.  Chase snatched that advantage in the Festival Curves as the aforementioned crash broke out behind.

Vilander was able to get through the pack and take the overall lead, but the team was then hit with a drive-through penalty for an equipment violation during the team’s mandatory stop.  With six minutes remaining, Vilander served the penalty and gave the lead to the PFAFF Motorsports Porsche.  Henzler then had to hold off a charging Chase for the win on the road.

Chase and Dalziel’s margin of victory was 2.056 seconds over K-PAX Racing’s Rodrigo Baptista and Maxime Soulet, who inherited the Pro-Pro victory following the PFAFF Porsche’s post-race penalty.  Baptista passed Alegra Motorsports’ Michael Christensen for third overall in the closing minutes when Christensen had to serve his own penalty for cutting the Festival Curves.

Following the penalty, Hargrove and Henzler had to settle for third overall, second in Pro-Pro.  Alegra Motorsports’ Christensen and Spencer Pumpelly were fourth, followed by Lu and Segal.  Following their pass-through penalty, Molina and Vilander ended up seventh overall, fourth in Pro-Pro.  An additional three-second penalty was tacked on for gaining positions in the Festival Curves on the restart, but that did not affect their final position.

In Pro-Am, Chase and Dalziel’s margin of victory was 3.831 seconds over Lu and Segal.  Precision Performance Motorsports’ Guy Cosmo and Patrick Byrne were a lap down in third.

In the Am class, Squadra Corse Garage Italia’s Martin Fuentes and Caesar Bacarella recovered from a first-lap spin for Fuentes in the Festival Curves to claim their eighth win in a row and finish sixth overall.  They ended up one lap ahead of DXDT Racing’s David Askew.

The GT SprintX action from Portland will premiere on CBS Sports Network on July 22 at 10 p.m.  Racing-wise, the GT SprintX season wraps up next month at Utah Motorsports Campus.