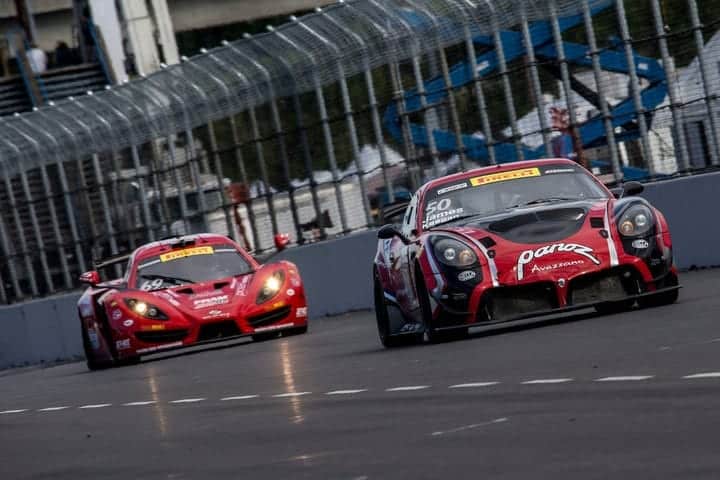 In Saturday’s GTS SprintX Race No. 1 at Portland International Raceway, Team Panoz Racing’s Ian James passed pole sitter Harry Gottsacker in the Festival Curves with two laps to go.  From there, James pulled away to take his and Matthew Keegan‘s first GTS SprintX win of the year.

“In this Pro-Am format, you are only as good as your teammate and Matt proved himself with the fastest guys at the start of the race,” James said afterwards.  “That set me up for a good stint.  I got behind the SIN CAR with Harry [Gottsacker]. I didn’t see any real opportunities to get by him.  He is very fast.  But he caught up to some slower traffic and I was able to seize my opportunity.  If I didn’t get that traffic, I think he had me today.  But you have to make the most of those chances and we won with it.”

On the start, Gottsacker was able to get the jump on teammate Mark Pavan and won the race to the Festival Curves.  Pavan’s dream weekend then came to a screeching halt when he was hit by PF Racing’s Scott Maxwell. Pavan then spun out in front of the whole field.  The incident damaged both cars but they were able to continue.  Maxwell and teammate Jade Buford ended up 10th in Pro-Am (15th overall) while Pavan was not out of the woods just yet.

Gottsacker pulled out a small lead over Am-class leader Brett Strom until a full course yellow flew due to an incident in the Festival Curves for Pavan and Mark Klenin.  Klenin was OK but his McLaren 570S GT4 was damaged, pouring viscous fluids down on the track as well.  Pavan was also out of the race.

The cleanup from Klenin’s incident actually moved the pit window back since the 25-minute mark was reached under yellow.  Once the race resumed, the field made their stops.

Team Panoz Racing’s No. 50 had been right up in the hunt with Keegan at the wheel but James was able to more or less match Gottsacker’s pace.  It was only after the leaders ran up on some of the slower Pro-Am cars in the closing minutes that James was able to make his move.

James and Keegan’s margin of victory was less than four-tenths of a second over Gottsacker.  Blackdog Speed Shop’s two Chevrolets were third and fourth.  Lawson Aschenbach and Andy Pilgrim were first, followed by the No. 11 of Michael Cooper and Tony Gaples.  Point leaders James Sofronas and Alex Welch were fifth.

In the Am class, Classic BMW’s Strom was able to avoid Pavan’s crash in the Festival Curves to take the class lead.  Running as high as second overall, Strom easily led in his BMW up until the pit stops.  Once Daren Jorgensen got in the car, trouble struck.  Ultimately, Strom and Jorgensen ended up two laps down, 13th in class (26th overall).

That gave the Am advantage to Drew Staveley with Epic Motorsports’ James Clay in tow.  In the final laps, Clay was able to run down Staveley and make the pass with just a couple of laps to go.  Once out front, Clay was able to open a gap and claim the Am victory in seventh overall.

Clay and Randy Mueller‘s margin of victory was 2.275 seconds over Staveley.  For Staveley, second place was good enough to give him the provisional points lead over Aurora Straus, with whom he was tied in the standings entering the race.

Despite losing out on the victory in the final laps, Gottsacker did turn in the fastest lap of the race at 91.161 mph.  That is good enough to give him the pole for GTS SprintX Race No. 2.  GTS SprintX Race No. 2 will go green at 2:55 p.m. ET.  The race will be streamed live at World-Challenge.com.