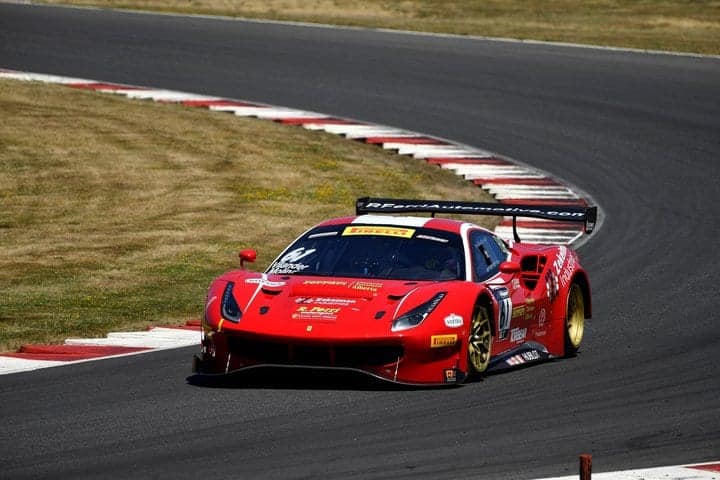 R. Ferri Motorsport’s Miguel Molina and Toni Vilander were able to put down the perfect pit stop midway through GT SprintX Race No. 1 at Portland International Raceway Saturday (July 14).  That turned out to be all the duo needed in order to snatch the lead away from Alegra Motorsports.  From there, Molina pulled way to their fourth SprintX win of the year.

“This track reminds me of some of the older tracks in Europe and those are always fun,” Molina said after the race.  “I knew I needed to get out in front of the Porsche after the pit stop. On cold tires, it is not easy. But the Ferrari felt good after Toni gave it to me and the Ferrari was solid all race. To win four races this year after never driving with Toni before is a thrill. The R. Ferri team is doing a great job.”

Alegra Motorsports’ Michael Christensen led from the pole early while Vilander gave chase.  Behind them, seemingly everyone else had issues.  K-PAX Racing’s Àlvaro Parente spun off at the Festival Curves 20 minutes into the race to draw a full course caution.  Parente was able to drive his Bentley back to the pits, but the team opted for more extensive repairs inside the garage.  Meanwhile, the No. 3 Bentley of Rodrigo Baptista and Maxime Soulet had a mechanical issue and was forced to retire as well.

The PFAFF Motorsports Porsche was penalized for a pit delta violation during their pit stop, taking them out of contention.  As a result, it was down to just Molina and Spencer Pumpelly to decide the race between themselves.  Pumpelly attempted to run up to Molina but simply could not prevent him from taking victory.

The margin of victory was 1.469 seconds for R. Ferri Motorsport over Alegra Motorsports’ Christensen and Pumpelly.  Third in Pro-Pro was PFAFF Motorsports’ Scott Hargrove and Wolf Henzler, nearly 27 seconds back.  CRP Racing’s Daniel Morad and Matthew Brabham were fourth.

The various issues in the Pro-Pro division allowed the Pro-Am teams to put themselves into the conversation.  TruSpeed AutoSport’s Parker Chase started from pole but had some trouble at the start.  Chase had contact that produced a very slow air pressure leak in the left front tire of his Audi.  Despite the issue that Chase later described as “kinda scary” he was able to hold the lead to the pit stop.

Once Ryan Dalziel took over the Audi, he turned some of the fastest laps of the race in an attempt to run down Molina and Pumpelly.  Despite that pace, TR3 Racing’s Jeff Segal was not far behind.  Dalziel was able to hold on to take his and Chase’s fourth Pro-Am win of the year and finish third overall.

The TR3 Racing Ferrari of Segal and Wei Lu was six-tenths of a second back in second.  Dream Racing Motorsport’s Alessandro Bressan and Yuki Harata were third, 22 seconds back.  In Am, Squadra Corse Garage Italia’s Caesar Bacarella and Martin Fuentes continued their season sweep with another victory.

Molina turned in the fastest lap during the race at 100.182 mph.  That will give him the pole for GT SprintX Race No. 2, scheduled to go green at 5:25 p.m. EDT.  The race will be streamed live at World-Challenge.com.