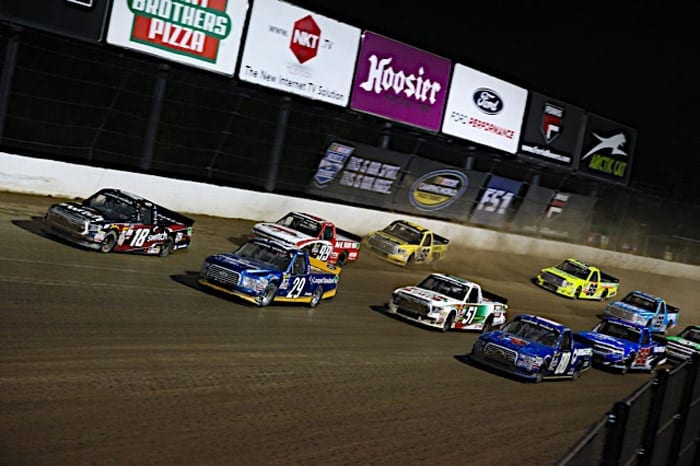 After an eventful race at Kentucky Speedway last Thursday night, the NASCAR Camping World Truck Series once again will race on a weeknight, this time at the Eldora Speedway on Wednesday, July 18.  This will be the sixth annual event at the track for the series, and it always is one of the most exciting races across the board in NASCAR all year long.

39 trucks are entered for this event after the Kyle Busch Motorsports No. 46 entry was withdrawn, and only 32 will make the race.  Seven drivers and teams will go home, and there are several changes on this week’s list with many dirt racing specialists in the field.

Dillon has run this event four times and has a best finish of fifth in 2014. Young’s Motorsports will field three trucks with regular driver Austin Hill in the No. 02 and Tanner Thorson in the No. 20.

JR Heffner will drive the No. 15 for Premium Motorsports this week.  Heffner has run in this event twice and has a best finish of 15th in 2016.

Two young guns will be making their debuts this week, Tyler Dippel and Logan Seavey. Dippel will be driving the No. 17 truck for DGR-Crosley Racing, while Seavey will be in the No. 51 truck for Kyle Busch Motorsports.  Dippel currently races full-time in the K&N Pro Series East and sits second in the point standings with one win, five top fives and seven top 10s in his eight starts.

Seavey has never made a start in NASCAR but currently races on the dirt full-time.  He has a POWRi Racing Lucas Oil National Midget Series championship on his resume, which came in 2017, along with seven career wins across the board on dirt, including five this year.  This year, Seavey entered the Chili Bowl Nationals and finished 14th, driving for well-known dirt owner, Keith Kunz.

Chase Briscoe returns to the Truck Series driving the No. 27 for Thorsport Racing.  Briscoe competed full-time last season for Brad Keselowski Racing and has run a part-time schedule in the XFINITY Series for Stewart-Haas Racing and Roush Fenway Racing this year.  Briscoe has a dirt racing background and finished third last season in this event.

Jeffery Abbey will be driving the No 34 truck for Reaume Brothers Racing this week.  Abbey has two career starts in the series, including one last season in this event, scoring a 14th place finish. Meanwhile, dirt racer Braden Mitchell, who has not made a NASCAR start, is set to pilot the No. 33 truck for the organization.

Max McLaughlin will make his Camping World Truck Series debut driving the No. 38 for Niece Motorsports.  McLaughlin is the son of former NASCAR competitor Mike McLaughlin, and has been a dirt racer for his entire career.  He finished ninth in the Super DirtCar Series points last season as well as being awarded the Most Popular Driver award.

Chris Windom will be driving the No. 54 for DGR-Crosley Racing.  Windom has made one start in this event, finishing 19th last season.  He also is the 2017 USAC National Sprint Car and the 2016 USAC Silver Crown champion.

Kyle Strickler will be driving the No. 63 for MB Motorsports this week.  Strickler currently races UMP Dirt Modifieds full-time and will be attempting to make his debut in the Truck Series.

Justin Shipley will drive the No. 80 truck for Jacob Wallace Racing this week. Shipley has two previous starts in this event, with a best finish of 25th in 2017.

Nick Hoffman will be behind the wheel of the No. 83 truck for Copp Motorsports.  Hoffman has not raced in the Truck Series since 2011, but he does have a dirt racing background racing UMP Dirt Modifieds.

R.J. Otto will attempt to make his Camping World Truck Series debut driving the No. 97 truck for JJL Motorsports.  Jesse Little has driven this truck in every race it has been in this year, but Otto will take the wheel for Eldora.  He currently races UMP Dirt Modifieds.

Sheldon Creed will be in the No. 99 truck for MBM Motorsports.  Creed is currently the ARCA Racing Series points leader and has three wins this season.  He has competed in this event twice before and has a best finish of 16th back in 2016.

Opening practice takes place on Tuesday, July 17 at 7:05 p.m. ET with no TV Coverage.  This race includes single truck qualifying with five heat races and the last chance qualifier to set the starting lineup.  Coverage begins on Wednesday, July 18 at 4:30 p.m. ET with coverage on FoxSports 1.

So, Ty Dillon and Ryan Newman are “headlining the event,” but when Kyle Busch runs Trucks, he is just stealing candy from babies. Love the FS Double Standard!