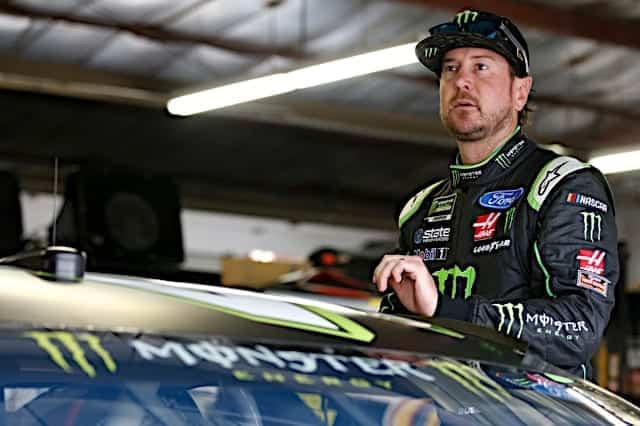 Kevin Harvick had a top-five finish at Kentucky Speedway, the best among his Stewart-Haas Racing teammates, but he didn’t lead a single lap. Neither did Kyle Busch, who finished fourth. Instead, Martin Truex Jr. led the lion’s share at 174 of 267, a second straight dominating performance at Kentucky Saturday night (July 14).

But the driver who was second on the laps led list did what both his teammate and his kid brother could not, running up front for a total of 45 laps. Kurt Busch amassed that total in three separate stints on point. Overall, he had a solid race, even if there wasn’t the long-run speed to contend with Truex for the win.

Busch may not be at the top of the list of those to challenge Harvick, Kyle Busch and Truex for the title. That’s because SHR teammate Clint Bowyer has two wins and sits 28 points ahead of Busch’s current seventh-place standing. But if he can up his game just a bit as summer turns to fall, turning some top 10s into top fives, the No. 41 team could be in the conversation. Being at SHR gives Busch an advantage as all three of his teammates are on track to make the playoffs, one of just two organizations (Team Penske) to currently be in that position. The 2004 Cup Series champion could prove to be a dark horse.

On one hand, an authentic race was what the doctor ordered after Daytona. After superspeedway mayhem, just one driver (Alex Bowman) crashed out this week. In fact, there were just two cautions other than the stage enders (Bowman’s crash due to a blown tire and fluid from JJ Yeley’s expired engine). The final 53 laps were run under the green flag, even when sprinklers went off on pit road. If nothing else, it allowed teams to take a deep breath and regroup for the summer stretch run to the playoffs.

There were a couple of moments of comedic relief after the checkered flag. First, as Truex celebrated on the frontstretch, his racecar rolled away down the banking. Oops. Truex had to chase it down to drive to Victory Lane, and then he got momentarily lost on the way. It was nothing more than a reminder of the human element in the sport, and a good one at that. But then the broadcast made the comment to the tune of the post-race being more eventful than the actual race itself.

That may have been an exaggeration, but does it represent something more?

An increasing number of fans are becoming less enamored by races like they were treated to Saturday night. If even the broadcasters are commenting on it, even jokingly, it doesn’t help the situation. While Saturday night’s event wasn’t one most people would put at the top of the list of great races, it’s not the TV booth’s job to decide whether the race was exciting or boring.

Truex obviously has Kentucky Speedway figured out. Since stage racing debuted last year, nobody but Truex has won a stage at the track; he has swept both races. This time, Truex started from the pole as well, making it a near-perfect weekend as he led five times for 174 total laps and carted home every playoff point available in the race.
His four wins this year back up Furniture Row Racing’s championship season in 2017.

Truex got off to a slow start this season in comparison to Harvick and Kyle Busch. But he’s come alive as the summer heated up and the No. 78 is again in great position heading into the playoffs. What the team won’t enjoy this year is a huge pad in the playoff points department, as both Harvick and Busch have a few more. All three will enter the postseason with enough points to be more comfortable than the rest of the field when it comes to elimination time. Truex had a major lead in that department last year, giving him more than a full race’s worth of cushion all the way to Homestead-Miami Speedway before the slate was wiped clean.

When… will we see the end of an era?

One bit of news coming out of Kentucky was that crew chief Chad Knaus recently re-signed with Hendrick Motorsports and the No. 48 team through 2020, which is also the end of driver Jimmie Johnson’s contract. Does that date put a definitive timetable on Johnson’s quest for an eighth championship? Johnson is 42, the oldest full-time driver in the series. That means it’s certainly possible and maybe even likely.

It’s rare for a driver to race past 45 anymore, and Johnson will be that age at season’s end in 2020. It’s equally probable that this is Knaus’ swan song as well; he’ll turn 47 next month and is recently married and expecting his first child this summer, so a different role at HMS may be in the cards.

If it is the end, it marks the conclusion of a career that defined more than a decade in NASCAR. Seven titles won, seven disappointments left in their wake for the competition. It hasn’t been without controversy. Johnson’s recent struggles can probably be attributed more to the woes of the Chevrolet camp in general, but it’s an unfortunate coincidence that it comes at this juncture of a stellar career. Unless something changes drastically and soon, 2018 is likely a wash, meaning Johnson may have just two more seasons – 72 races – to write the final chapter of his Hall of Fame career.

Early on in the season, Chevrolet’s performance could be overlooked, to a degree, because the manufacturer changed models in the offseason from the SS to the Camaro. It took until midsummer last year for the Toyota camp to find its collective footing with a new Camry. From there it was just about all Toyota, all the time. But just past the halfway point in the season, the Chevrolet stable, as a whole, isn’t any better than it was in March. Any gains teams have made have been few and generally insignificant.

Kyle Larson’s team is the exception, but even he doesn’t look like he’s going to reel off a bunch of wins anytime soon. Johnson has made a few improvements here and there, but whether that’s HMS as a whole getting a handle on the cars or simply Johnson showing the caliber of driver he really is in adapting to new chassis is up for debate.

The other question here does become if Chevrolet is really putting the resources behind NASCAR it once did to keep up with Ford and Toyota. Losing SHR to Ford was a blow, costing information from a championship-caliber organization. With just one win this season, and that on a plate track, it’s almost painful to watch. Just two seasons removed from a title, the manufacturer has gone from top of the heap to the bottom of the barrel.

How… is the playoff picture shaping up with seven races to go?

The designation of Kyle Busch (five wins), Harvick (five wins) and Martin Truex Jr. (four wins) as the big three is grating. But it’s hard to deny they’re far, far ahead of the rest of the field, sitting in the top three points positions with 14 race wins and 82 playoff points among them. In comparison, their competition has five wins and a paltry 44 playoff points. That’s the entire rest of the field. Also locked into the playoffs are Bowyer (two wins), Austin Dillon, Joey Logano and Erik Jones (one win apiece). With Dillon sitting 18th in points, that currently puts the top 15 in points in line for a spot, nine of them winless this season.

A whopping 317 points separate leader Kyle Busch from 15th-place Bowman, with Bowman holding the spot by an uncomfortable nine points over Ricky Stenhouse Jr. Also on shaky ground are Bowman’s teammates Johnson and Chase Elliott. Should Johnson miss the playoffs, it would be the first time since the inception of the format he would not be among the contenders. He’s the only driver with appearances in every postseason thus far (since the Chase format began in 2004).

The next group of drivers looking to squeeze in come September (Stenhouse, Paul Menard, Ryan Newman, Daniel Suarez and Jamie McMurray) isn’t exactly setting the world on fire, either. One might point his way in, but the chance of one of that crowd winning his way to a berth isn’t much better than the group currently holding down those last few playoff spots.

Fox and NBC have been trying to sell ‘exciting racing’ for years, even when the race is officially conducive to napping. frankly, I find it refreshing to hear honesty from the booth instead of a hard sell for nothing.

That comment is the only thing I wish I’d seen about this “event.”

I found the race very ‘watchable’ and thought NBC did a good job of finding action ‘back in the pack’ when Truex was the uncatchable leader.

Just cant watch mile and a half shows

Some people thrive professionally with greater stability in their personal life while others lose their edge. Chad Knaus seems to fall in the latter group.