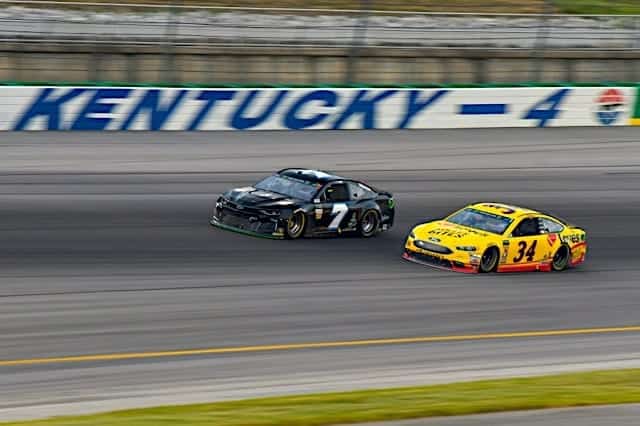 Unlike weekends past, this one at Kentucky Speedway was underwhelming for the underdogs of the Monster Energy NASCAR Cup Series.

Before we dive deep into the weekend, it’s important to set expectations. Even after a weekend like Daytona International Speedway, reality can come quick and fast for the teams who can’t bring the pace on a weekly basis.

Kentucky has also been branded as one of the sport’s most tricky ovals. Recently reconfigured, the 1.5-miler packs a punch with two different ends: A faster corner with higher banks to start the lap and a flatter, tighter corner to end it. Despite the unique layout, the race had a clean race and common characters up front. With only two non-stage cautions, Martin Truex Jr. was the dominator for the second straight year, leading 174 of 267 laps. Also, the winningest Cup driver in track history was third with Brad Keselowski.

Behind them, the underdog teams were hoping for a subpar top 20. And in sharp contrast to Daytona, only one of them left with one.

That driver was David Ragan. This Front Row Motorsports wheelman hasn’t had many high points in 2018 (only one top 10) but has been the best of the underdogs more than once, earning his fifth Frontstretch “Underdog of the Race” at Kentucky with an 18th-place finish.

Running 20th on average, this 400-miler Saturday (July 14) was one of his most consistent races this year, tying his best non-plate average running position of 20th for the fourth time in 2018. In doing so, he earned the good kind of TV time for a small team when he jumped to 13th position in the final stage of the night.

From the largest “Top of the Class” section at Daytona, we have the shortest section of the year this weekend in Kentucky.

Behind Ragan’s solid run were also loads of lackluster results for small teams. Chris Buescher, who has been the top underdog on two occasions in 2018, only managed 23rd after starting 20th for JTG-Daugherty Racing.

His teammate AJ Allmendinger suffered some damage on the race’s final restart, forcing the No. 47 to pit road. A tough run as is was further impacted, then resulting in a 30th-place result. It’s a stark contrast to the team’s best-ever double performance last weekend at Daytona.

Michael McDowell had his sixth straight finish outside the top 20, coming home 24th for Front Row. However, three of those recent runs were in 21st, proving that the No. 34 at least avoids accidents for consistency.

Kasey Kahne and Leavine Family Racing were hot off their best run yet, finishing fourth at Daytona after leading 17 laps. But the team builder could not lead to sustained momentum as the No. 95 drove quietly to 25th spot.

Darrell Wallace Jr. showed some potential in Friday practice, posting some solid times early. But just like that, the weekend came and went with another tough run for Richard Petty Motorsports and Wallace, who finished 27th, three laps down.

For Premium Motorsports, anytime you finish higher than 30th, you’ve had a good day. Fortunately for Premium, their full-time driver Ross Chastain has given them finishes in that area in 2018. Saturday’s 28th was his 16th run of 30th or higher in 17 starts.

Ty Dillon finally saw that first top-10 finish last weekend at Daytona, finishing sixth. That performance was not repeated in Kentucky, though as the No. 13 ran 29th. Corey Lajoie was 31st followed by BJ McLeod, Landon Cassill and Timmy Hill.

Jesse Little added the Little name as the next father-son duo to race Cup. The 20-year-old made his series debut on Saturday to join his father Chad, who ran more than 200 Cup races. The first-timer finished 35th for Premium.

Garrett Smithley ran 36th for StarCom Racing. His second career start went more to plan than his first, as he ran just one lap back at Michigan. This time, he saw the checkered flag, running 251 of 267 laps.

Matt DiBenedetto hit the wall midrace and dropped out on lap 200 due to a busted left-front hub. JJ Yeley blew a motor in Turn 3 the lap prior, finishing 38th.

It was a tripleheader weekend out in Kentucky, with both the Camping World Truck Series and XFINITY making laps.

Korbin Forrister finished 13th for All Out Motorsports, the team’s best-ever finish in the series. The run was also Forrister’s best result since Daytona in 2015.

The 200-lapper for XFINITY didn’t see much solid action from the small teams, with none making the top 10. Ryan Truex was the top underdog in 13th followed by Ryan Sieg 16th and Ross Chastain 17th.

Happy to have Sunday with the family. Thanks to all the fans who came out to @KySpeedway

Learned an absolute ton! Made a lot of mistakes that put us extra laps down but car is in once piece. P35 my first time. CUP is no freaking joke. I mean damn.. but holy ? driving those animals are fun! Thanks for all the support. Focusing on Bristol truck race now in Aug. ??