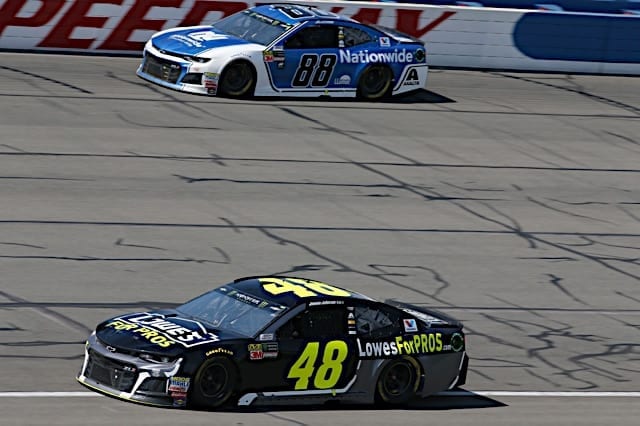 Ballads generally follow a set script, often involving tragedy, usually involving a death. They’re some of the best types of songs and poetry.

The tragedy for the rest of the Monster Energy NASCAR Cup Series field at Kentucky Speedway was that Martin Truex Jr. was racing. That meant the death of their hopes of getting to Victory Lane. Truex clobbered the field, sweeping both stages, leading 174 laps and winning the Quaker State 400 presented by Wal-Mart by over two seconds.

Aside from that, perhaps the only tragedy was the infield sprinklers malfunctioned and began spraying during the race.

In all three national series races this weekend, there were only three cautions for accidents. That’s how clean (and what some might say, boring) the Kentucky races were.

Since the 2018 season is slightly more than half over (19 of 36 races complete), Hot/Not will do something a little different. This week, we’ll look at team performance overall during the first half of the season.

Hendrick Motorsports. Their four-car team (Jimmie Johnson, Chase Elliott, Alex Bowman and William Byron), not long ago the premier organization in the sport, hasn’t triumphed since Kasey Kahne lucked into an Indianapolis win last July. They’ve combined for one pole, 144 laps led, seven top fives, 21 top 10s and 11 DNFs. Plus, full-season primary sponsor Lowe’s is leaving Johnson after this season. For the moment, three drivers are inside the playoff cutline, but they’re all hanging on the bubble, and rookie Byron is well outside the playoffs. Chevrolet’s new Camaro has appeared to further torpedo their chances.

Joe Gibbs Racing. Their four-car Toyota outfit (Kyle Busch, Jones, Denny Hamlin, Daniel Suarez) is the only other team to score wins for multiple drivers this season. They’ve totaled six wins, seven stage victories, 22 top fives and 38 top 10s to go along with three poles and over 1,200 laps led. Three drivers will make the playoffs and it’s possible that Suarez could steal a win at Watkins Glen to join them.

Roush Fenway Racing. They demoted Trevor Bayne to part-time status after bringing back veteran Matt Kenseth. But among their three drivers, the storied organization has managed just two stage wins and four top 10s to along with seven DNFs. Ricky Stenhouse Jr. is their top driver right now with an average finish of 18th. Their standings in the owner points are 16th (Stenhouse) and a tie for 29th with Germain Racing (Bayne/Kenseth).

Alliances. Truex and Furniture Row Racing (JGR) lead the way, of course, with four wins, five poles, five stage wins, 564 laps led and 13 top-five finishes for the defending series champion. Paul Menard and Wood Brothers Racing (Team Penske) have a pole, a stage win, a top five and four top 10s. They would have had more except for various mechanical gremlins.

Also, both Front Row Motorsports cars are outperforming the No. 6 of parent team Roush Fenway – almost a full race ahead in owner points – and might be challenging the No. 17 if not for dreadful luck ending their day often. The JTG-Daugherty Racing cars aren’t far behind their parent team of Richard Childress Racing, either.

Speaking of RCR, they’ve got seven combined top 10s between Austin Dillon and Ryan Newman. While Dillon has his Daytona 500 win locking him into the playoffs, they have nine finishes of 26th or below, not counting Daniel Hemric’s less-than-impressive 32nd MENCS debut at Richmond. Dillon’s average result is 19th and he’s finished on the lead lap in only seven races this season. Newman has finished on the lead lap in nine races and is averaging a 20th-place result.

Chip Ganassi Racing. On the one hand, Kyle Larson and Jamie McMurray have driven the strongest Chevrolets this season, turning in a combined six top fives and 14 top 10s. Larson has won two poles, won a stage and led 365 laps. On the other hand, they’ve combined for 11 finishes of 26th or worse and six finishes of 30th or below. McMurray has almost no chance at making the playoffs and has led just one lap all year.

Erik Jones’ No. 20 went minimalist this weekend in the black and white colors of Freightliner. Very simple and not flashy. Usually, when you see a car this plain, it seems like it’s an unsponsored underdog, so it was a nice change from some other car designs that have been run this year.

NASCAR’s XFINITY Series and MENCS head to New Hampshire Motor Speedway this weekend after the trucks play in the dirt at Eldora on Wednesday night. What might happen?

I would guess that a CWTS regular will win Wednesday night. John Hunter Nemechek will battle Ryan Preece for the NXS win, a Cup driver with a win will get another on Sunday, and the first driver change/manufacturer switch news of the 2018 Silly Season will drop in the next two weeks.

In the XFINITY Series, Kyle Busch, Hamlin, Harvick, Brad Keselowski, Kenseth and Truex have all won. Kyle Busch, Austin Dillon and William Byron have all been victorious in the CWTS.

Based on those results, either Bowyer, Harvick or Logano gets the giant lobster Sunday afternoon.

The Foxwoods Resort Casino 301 will run Sunday, July 22 at 2 p.m. ET with TV coverage on NBCSN.

Hmmm… Most of the articles last year seemed to indicate that Kasey Kahne was the problem at Hendricks. Looks like the problems might actually be deeper than the drivers. Huh, who’da thunk it?

What’s the difference between the Camaro body from the xfinity to cup not including the engine as the xfinity Chevys find their way to the front?

Good question! I’m not sure what the difference between the bodies are, but the ZL1 street model (Cup) is more powerful and has quicker acceleration than the SS (NXS). Different rules between the two series probably help keep that distinction somewhat. Mostly I would think it would be simply that the depth isn’t as strong in XFINITY compared to Cup – SHR and Team Penske run one full-time and one part-time team each, for example.

Excellent question! And that is exactly what is missing from FS and everything else that pretends to be auto racing journalism today. All you guys do is watch the races on TV and report what the rest of us have already seen. Where is the value added in that? How about Tom Bowles assigning one of his 30 staff members to do some actual research into what is wrong with the Chevy Camaro at the Cup level? Of course, that would require that somebody get off their couch and go to the race and the race shops to interview crew members and engineers. But that is EXACTLTY what we should be getting from people who advertise themselves as journalists – a little less conversation and a lot more investigation!