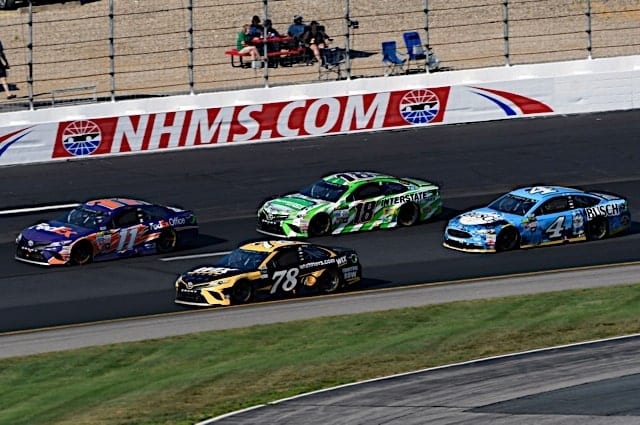 Did You Notice? … Loudon’s lonely spot within the Monster Energy NASCAR Cup Series? The 25th anniversary of New Hampshire Motor Speedway earning a Cup date is coinciding with its schedule getting cut in half.

Loudon had one date, of course, from 1993 – 1996 before owner Bob Bahre conspired in a deal that changed the sport. Partnering with Speedway Motorsports, Inc.’s O. Bruton Smith, the duo bought ailing short track North Wilkesboro Speedway with the goal of using its two Cup dates. As a result of the purchase, Bahre earned a second date up in New Hampshire while Smith got a coveted race down at Texas Motor Speedway.

At the time, both facilities offered more seating, money, and brought NASCAR into different regions of the country. But the move also killed off one of the sport’s iconic short tracks which – apart from a brief revival a few years back – has sat dormant ever since. The track has fallen badly into disrepair as a recent feature from Bright Sun Films showed in great detail. Chances of racing returning there again are next to zero considering the millions it would cost simply to get the place back in working order.

Some will say karma’s come back around with NHMS losing its coveted second date on the schedule. It’s struggling to earn a sellout crowd despite dropping to one race in midsummer. (What else is new these days?) Bahre is long gone, having sold to Smith and when SMI saw a chance to earn a second date at Las Vegas Motor Speedway? That 1.5-mile oval, still drawing a large crowd, got top billing.

But while money talks, it’s the competition at NHMS that never got off the ground. What memorable MENCS races can you remember from this flat, near-impossible-to-pass 1.058-mile oval? Sure, there’s been a moment here or there. An epic battle between Robby Gordon and Jeff Gordon in 2001 comes to mind, the site of Robby’s first career win. Contact between them set up a frantic finish in which Gordon, still new to the No. 31 and Richard Childress Racing, came out on top. What a crazy way for them to finish a year in which they lost Dale Earnhardt.

But for every great race at NHMS, we’ve had about four stinkers. That’s just the truth. The most infamous was when restrictor plates were added in fall 2000 following the deaths of Kenny Irwin and Adam Petty at the track. Jeff Burton wound up leading every lap in what many consider the worst Cup race of the modern era.

That tragedy left a cloud over this place which never fully lifted. There was the Clint Bowyer victory in 2011, a dramatic ending when Tony Stewart ran out of gas. But then NASCAR found the car to be outside tolerance in post-race inspection and Bowyer was docked 150 points. How quickly the bloom fell off the rose….

Last fall, Kyle Busch won a race that had just six lead changes and a race memorable only for its one major wreck at the end of stage two, an eight-car crash that collected title contenders Kevin Harvick and Martin Truex Jr. For a supposed short track, the leaders were spread out most of the day as track position and aero took center stage.

Simple geography gives this track an edge to stay on the Cup schedule going forward. It’s driving distance from Boston, a major market, and there’s no viable replacement for it in the region. But marketing NHMS in modern NASCAR will be tough. We’ve seen a track like Fontana benefit from cutting its dates in half but aging pavement helped competition there. I just think this track configuration, paired with the current NASCAR chassis, isn’t going to provide great racing. You need a major renovation and track redesign.

That’s a project unlikely to get green-lighted, leaving NHMS just marking a spot on the schedule… until what, exactly?

My answer to that is… so? That may be bad for the fabricators but it’s good for the sport. NASCAR thrives on unpredictability and it’s clear no one has any clue what’s going to happen on the ROVAL. It could be a five drivers finish type of day; passing may be at a premium. But no matter what, putting out a fresh idea, a new track on a stale schedule is a step in the right direction. I’d be more worried if it all went according to plan. Same old, same old is the absolute last thing the sport needs right now.

There’s just one problem for me: the main feature starts too late. I’d move it all up by an hour, starting the main at 8 p.m. ET and allowing for the schedule to slide back a bit. Let the sport hook in younger kids and not lose fans who have to work in the morning. Wrapping it all up by 10 p.m. (especially with all the heat races involved) versus 11 makes a difference.

The racing at NHMS sticks! it has for years and adding the “lower groove” only made it worse. The best thing that could happen to this track is for SMI to tear it down and start all over again..this time with banking.

NH just proves that building a track for a ‘market’, rather than good racing is not going to turn out well.

I was at the first Cup race at Loudon.It was a hot day and the seats were uncomfortable
Rusty won by beating his top competitors out of the pits. It was Davey Allisons last race.
He could have won that race, he led at lot of laps but was beaten out of the pits by Rusty and then as now passing was not easy
It took long time to get out of the parking area and the exit roads were jammed Not a great race or a fun experience. Though it was the closest race to my home I never went back there.

Hey Tom! One of your posters from another article asked the question of what specifically is wrong with the Chevy Camaro at the Cup level, especially in comparison with its relative competitiveness at the NXS level.

My response: Excellent question! And that is exactly what is missing from FS and everything else that pretends to be auto racing journalism today. All you guys do is watch the races on TV and report what the rest of us have already seen. Where is the value added in that? How about Tom Bowles assigning one of his 30 staff members to do some actual research into what is wrong with the Chevy Camaro at the Cup level? Of course, that would require that somebody get off their couch and go to the race and the race shops to interview crew members and engineers. But that is EXACTLTY what we should be getting from people who advertise themselves as journalists – a little less conversation and a lot more investigation!

I know this off-topic as far as bitching about NH. But surely with THIRTY staff members, you could assign someone to actually get off their arse and do some investigative reporting as a break from the constant whining and complaining which is the bread and butter of Fronstretch. Are you up for a little actual work?