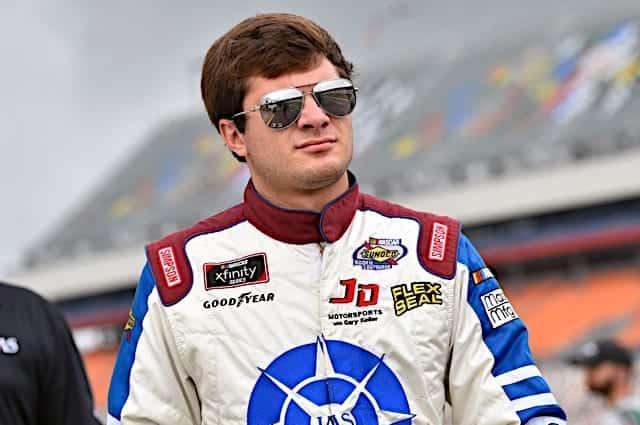 When Johnny Davis, owner of JD Motorsports, announced his driver lineup for the 2018 season, many people looked at the name Vinnie Miller and wondered, “who is Vinnie Miller?”

Growing up, Miller, 20, competed in quarter midgets as well as pro late models. Within days of graduating high school in 2015, he moved south from his home in Michigan to pursue his racing dreams.

After just seven CARS Super Late Model races, six starts in the ARCA Series and K&N Pro Series East, and one race apiece in the NASCAR XFINITY and Camping World Truck Series, Miller found himself in a full-time ride at JD Motorsports for the 2018 XFINITY season.

Now 17 races in, and Miller’s rookie season has eclipsed the halfway point. During the first half of the year, the No. 01 team had a trio of top-20 efforts, with a best outing of 17th at Talladega Superspeedway in late April.

“I have learned a lot, I’ve learned a lot of new tracks,” Miller told Frontstretch regarding his rookie season. “I’m getting experience on these tracks for the first time, which I have struggled with. Coming back around to all these tracks, I think I’m going to see some improvement on them.

“For my rookie season, my team has been really upbeat and really lifted me up with confidence. They’ve been great to me, and I think they are excited for what the second half of the year will bring, and they’ve been happy with the first half.”

Currently, Miller sits 26th in the series standings, 14 positions behind teammate Ross Chastain, who holds the final playoff position, and seven behind Garrett Smithley. Meanwhile, it’s his team that he believes has been the biggest strength.

“I think we have very good communication, which is very important at this level of racing,” he said. “If your crew doesn’t respect and trust you, you’re not going to trust them. At the end of the day, they aren’t going to put together a good race car for you and you’re not going to want to be driving for them and think that they don’t care and that you’re going to wreck if they don’t prepare it right.”

All three full-time drivers for JD Motorsports (JDM fields four full-time teams, but the No. 15 has a variety of drivers) are fighting the same battle — speed, which comes from having money. Competing for a small team and being a rookie has been a battle for Miller, though he believes the company is heading in the right direction.

“There are a certain few tracks that I could have probably gotten more out of the car and got a better finish, but I think for the equipment I’ve given, I get the most that I can out of it,” Miller said. “For a lower budget team, I think JDM does the best job out of any low budget teams I’ve ever visited.”

Out of the four full-time teams, Miller has the most consistent sponsorship, coming from JAS Expedited Trucking. In the 17 races this season, the Michigan company has been on the No. 01 car for 11 of them.

“JAS has paid my family a big chunk of money this year to help sponsor for racing,” Miller said. “This is the first year they’ve been on board with me. I love Tony [Freeland, owner], he reminds me a lot of my grandfather who is the one that got me into racing in the first place… He helped fund our deal, we probably wouldn’t have been able to do it without him this year. He’s the reason I’m in XFINITY today.”

Because the team doesn’t have a big budget, there are some races where the No. 01 is in a steel body, while most of his competition has transferred to the composite bodies, which is “better for downforce.” That was the case at Kentucky Speedway last weekend when Miller finished in 29th, eight laps off the pace.

As the season progresses, Miller expects to see better results. In 17 races this year, he has an average finish of 27.5 with an average start of 33rd. Ultimately, it all comes down to the speed factor, but he believes he’s in a good position moving forward.

“I think I’m in a position in my rookie season that I’m doing well enough that I’m not going to get fired,” Miller said. “I think if I can get a couple more top 20s and maybe perform a little bit better than I am right now, that I’ll be back at Johnny’s next year and we’ll just keep on going like Ross and Garrett have been doing until I get an opportunity to go to [Monster Energy NASCAR] Cup [Series].”