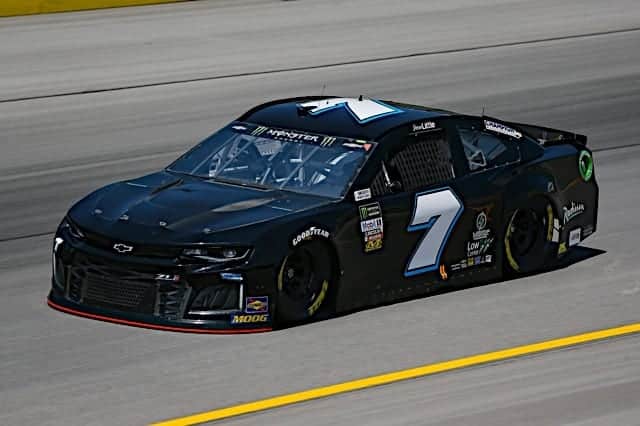 In the latest episode of the 2018 Frontstretch Podcast, we review a full weekend racing in the Bluegrass State with Dustin Albino, Mike Neff, Zach Catanzareti and Jesse Little, who made his Monster Energy NASCAR Cup Series debut at Kentucky Speedway.

Martin Truex Jr. put on a clinic, leading a race-high 174 laps en route to his fourth victory of the season at Kentucky. Pit strategy was the only way the competition could keep up, as both Kurt Busch and Brad Keselowski made two-tire calls at different points, putting their Fords out front until the No. 78 team settled in and drove by.

The NASCAR XFINITY Series race, however, wasn’t over until the final lap. Christopher Bell won his second race of 2018, but had to battle series regulars Daniel Hemric and Justin Allgaier to the very end in what could be a championship race preview for Homestead-Miami Speedway, with the addition Cole Custer, who finished in fifth.

Ben Rhodes was victorious in the Camping World Truck Series race, also making a bold pit call by taking no tires at the last caution, jumping ahead of Stewart Friesen, who could never catch back up. The No. 41 team is now locked into the playoffs.

Finally, Little discusses how Cup cars are different compared to anything he’s ever competed in. Last weekend was the first time he’d ever turned a lap in a Cup car, and he has yet to ever wheel an XFINITY ride. He also believes NASCAR should let Kyle Busch and Ricky Stenhouse Jr. settle their differences among each other. On a fun note, he also discusses mullets and how his came about.

Rate, review and subscribe to the Frontstretch Podcast: iTunes