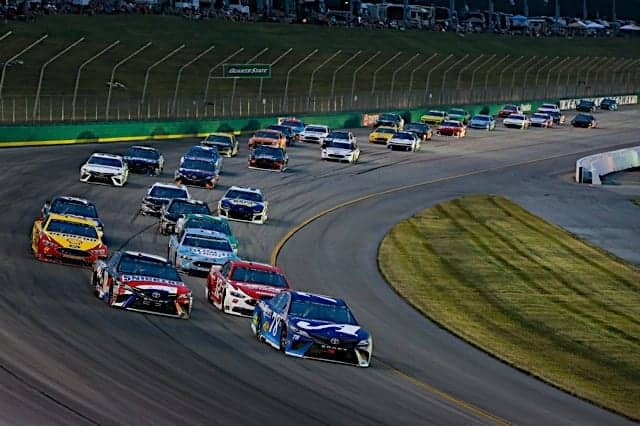 Happiness Is…Distance.  The adage is that distance makes the heart grow fonder. Thatʻs a positive spin on the problems that distance can bring in any relationship. Of course, distance can also encourage a wandering eye and dissolution of the relationship, that one where distance was supposed to bring more love. This is where we find ourselves as the Monster Energy NASCAR Cup Series ditches the 1.5-mile tracks for the next seven races.

One of the overlooked mentions from the drank-too-much-Red-Bull broadcast team on NBCSN was the mention that Kentucky Speedway would be the last race on such a track for the rest of the ‘regular season.’  The avoidance of the 1.5-miler lasts until the first race of the ‘playoffs,’ when the series hits Las Vegas Motor Speedway. Such a realization must be welcomed by both fans and those in charge — though some race teams are likely rather pleased that they wonʻt have to get left in the dust at another speedway.

The 1.5-mile tracks have provided little in the way of interesting action this season. The only commotion seems to come in the form of restarts and from an occasional spin or blown tire or someone checking the time on their dashboard and losing focus (Has anyone figured out why Denny Hamlin has the time as part of his dash?). Drivers have been tepid in taking risks, and thatʻs if thereʻs any risk to be taken, because it seems to take only four or five laps before the field is strung out enough that the aero-push takes over and everyone gets stuck in place.

So yes, maybe itʻs a great time to get away from the cookie-cutter tracks. These tracks donʻt provide the same sense of excitement they once did, as the cars have become so hyper-engineered and the drivers reluctant to do anything that would mess up the car and damage a good points day. What used to be a demonstration of speed coupled with danger now looks like a place of ease and tranquility. Itʻs all too rare for a race ending like the one at Chicagoland Speedway. Now itʻs time to see if any of the next seven tracks can provide the stage for some fascinating racing.

Happiness Is…Kenseth.  When the NBCSN broadcast wasn’t sucking on the fumes of the Big Three of Martin Truex Jr., Kevin Harvick and Kyle Busch, they talked about Kyle Larson. Imagine how seven-time champion Jimmie Johnson must feel — they barely mentioned him, and when they did, he then slid back five or six spots. Then again, when Johnson finishes 14th, perhaps the attention works as ignominy and heʻs happy to be ignored.

The crew, however, bothered to mention that Matt Kenseth was not coasting around three laps off the pace like he seemingly had been doing ever since getting behind the No. 6 ride.

Instead, the former champion took home a 19th place result, and gasp, also enjoyed a lead-lap finish. Everyone has known that Roush Fenway Racing has been floundering, and this kind of result highlights the issue, as the team must feel overjoyed at Kensethʻs ‘success.’ Then again, he trailed Johnson by five and Hamlin by three spots, respectively, so thatʻs not too bad.

The finish actually shows a marked improvement since Kenseth has rejoined RFR. He had been averaging 25th and could be found two or three laps down, hovering around his teammate Ricky Stenhouse Jr. For as much trouble as Stenhouse created at Daytona International Speedway, he stayed out of the NASCAR tabloids this week and managed to finish in 26th and only one lap off the pace. For these tracks, the finishes these drivers earned must bring a sense of optimism, and thatʻs good — itʻs good to have more competitive teams in the field. The question now is whether the trend will continue in the positive direction.

Happiness Is…Germany.  This weekend, Germany returns to the Formula 1 schedule after having an on-again-off-again relationship.  Last year and two years prior, the German Grand Prix was not held, owing to financial issues.  It has returned this year and the prospects look good for it to remain.  Once a stalwart on the schedule, it has faced questionable support over the last decade.

Having it back on the schedule this year makes for an interesting German versus German kind of competition.  Sebastian Vettel leads the Driverʻs standings by eight points over Lewis Hamilton as he heads to his home track.  The German manufacturer, Mercedes, has won the last two races, in 2014 and 2016, with Hamilton earning the win in the latter.  So this race looks to be one for the Titans.

Throwing another element into the mix is the fact that Ferrari has surged ahead in the Constructorʻs title, sitting 53 points clear of Mercedes.  This race is one where Mercedes must provide a show in front of their home fans, one that lays claim that they are not falling behind the Italian team.  It may not be a must-win race, but itʻs pretty close.  That kind of drama is what makes racing interesting.

The time on denny’s dash is there to track time left in practice.

This week is the German Grand Prix. Hungary is next weekend.

I recognized that way late. Big gaffe on my part.
Thanks for reading

Kenseth’s return to NASCAR has accomplished nothing, except perhaps to convince him that retirement is preferable to driving for a bad team. A person would have to truly desperate to see “happiness” in a 19th place finish for a former champion. Frankly, I’d rather just watch the Big Three than the Little Thirty. Nobody becomes a sports fan to cheer mediocrity – except writers for FS.