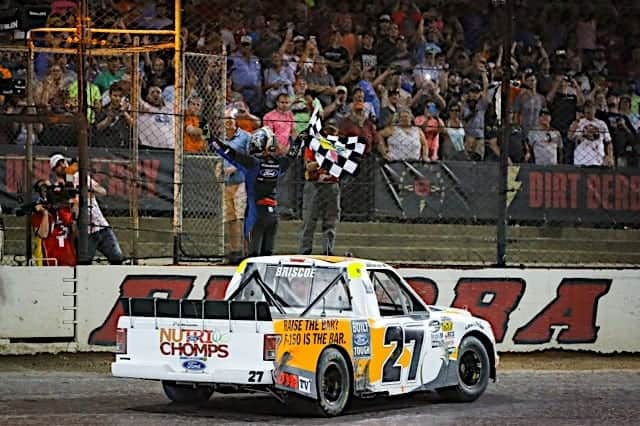 It isn’t every day that someone pulls off what Chase Briscoe did last night at Eldora Speedway.

Briscoe, a part-time competitor in the NASCAR XFINITY Series for Roush Fenway Racing in 2018, returned to his old stomping grounds — the Camping World Truck Series for a one-night-only affair (at least, for now), winning the Truck Series’ annual trip to Rossburg, Ohio, on dirt Wednesday night (July 18).

Non-full-time drivers winning in NASCAR’s lower national series are, of course, nothing new. In 2018 alone, Kyle Busch, John Hunter Nemechek and now Briscoe have won in the Truck Series while running part-time schedules in the series, while XFINITY has seen it even more, not just with Cup interlopers but also competitors like Ryan Preece.

Rarer, however, is the specific team situation with which Briscoe was faced. Though he competed for ThorSport Racing, a team with multiple full-time trucks in the series, in the event, Briscoe drove the No. 27 as a fifth truck for the organization, one that had not run at all in 2018. The same happened at Eldora in 2017, too, when Rico Abreu drove a one-off race for ThorSport in the No. 89.

Except Abreu didn’t win the race. Briscoe did.

Prior to Briscoe’s win, every Truck Series race in 2018 had been won by a team that has competed in every race since, even if it’s with different drivers (see: Kyle Busch Motorsports’ No. 51). The same can’t be said for XFINITY, where the part-time Biagi-DenBeste Racing No. 98 emerged victorious at Atlanta Motor Speedway in the second race of the season

The No. 98 has still entered eight races this season, though — just a little less than half of the overall schedule. ThorSport’s No. 27, on the other hand, hadn’t shown up at all before Eldora, and there’s no indication it’ll even return.

Thus, one can kind of separate winning teams into three categories: full-timers, part-timers and super part-timers. The first is obvious — your full-time KBM teams, ThorSport’s other four trucks, etc. Part-timers are more like Biagi’s No. 98 in XFINITY, or in the Truck Series (though it has yet to win this year), someone like the No. 75 of Henderson Motorsports.

And then there’s the No. 27, which has much of the resources of a full-time team but is out for a quick hurrah before no longer surfacing — at least, unless there’s use for it.

That puts Briscoe’s ride more in line with the Tony Stewart Daytona International Speedway specials of the late 2000s and early 2010s. Remember those? In the 2010s in particular, Stewart ran the No. 4 for Kevin Harvick. Inc. in the season-opening XFINITY races at Daytona. Did he win? Yes, very much so; four years in a row, in fact, with a variety of teams. In both Harvick-owned instances, the No. 4 either didn’t run again that year (2010) or rarely did so (four races total in 2011). His 2009 No. 80 for Hendrick Motorsports was also a completely one-off affair.

Marcos Ambrose used to do the same thing on road courses for different suitors, running a one-off car at one of the XFINITY Series road courses for whomever would put him in and often winning, his numbers including the Nos. 47, 9 and 09.

But if it’s a Truck Series example you’re looking for, it actually came at Eldora the first season the series ran there.

Well, first, some background: in 2013, Richard Childress Racing was running two full-time trucks in the Truck Series for Ty Dillon and Brendan Gaughan. However, once Eldora came around, Austin Dillon decided he wanted in, too, so RCR unloaded a third truck for him. He promptly won the race.

It’s a slightly different situation than Briscoe, though. While Briscoe’s No. 27 had zero owner’s points to fall back on — meaning that if it hadn’t finished in the top five of their qualifying race or the top two of the last chance qualifier, Briscoe would not have raced — Dillon did, thanks to the No. 39 normally fielded by RSS Racing and driven by, more often than not, Ryan Sieg. Sieg and Co. gave up the No. 39 to Childress for the event, opting in the end to not run the race at all (though it withdrew a No. 93 to be driven by Chris Jones). A similar system was used this year when JR Heffner piloted a truck of his own equipment but used the No. 15 for Premium Motorsports.

Now, bear this in mind: at the beginning of the 2018 season, ThorSport had registered the No. 27 for use this year, according to documents circulated before the start of the season at Daytona. While this could have been simply with a one-off race at Eldora in mind, the organization could also have other plans for the fifth team before the end of the year, whether it’s for Briscoe or someone else. If that happens to be the case, the No. 27’s effort — then a one-and-done situation — becomes a little different in the annals of history, like perhaps KBM’s No. 46 team that ran four races in 2017, winning once at Bristol Motor Speedway.

Otherwise, remember it going forward as a time when NASCAR’s lower series continued to prove that you don’t need a full-time schedule to win a race.