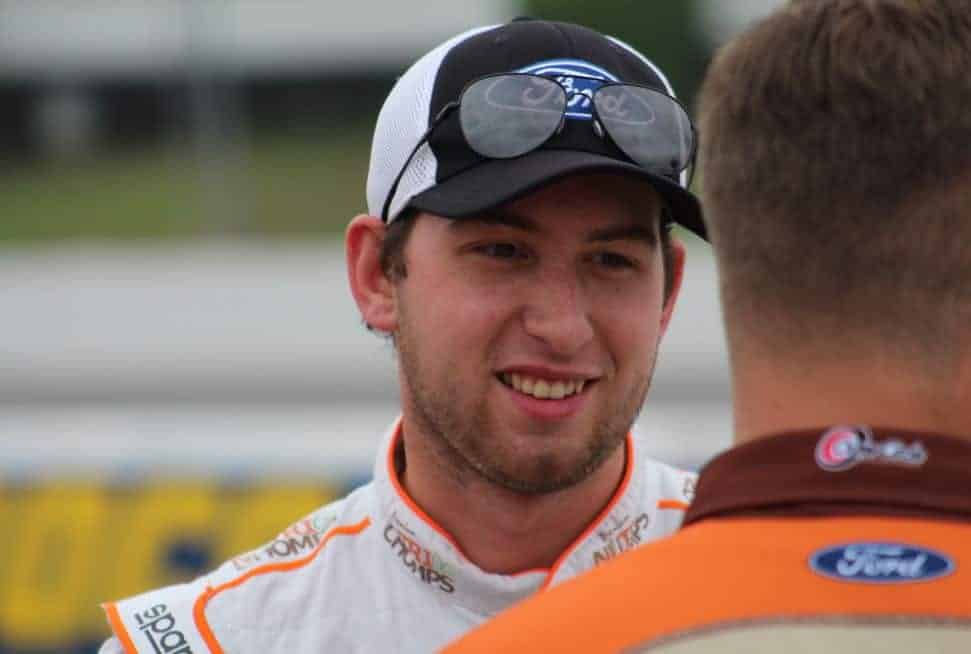 In a Nutshell: In his first NASCAR Camping World Truck Series start since winning last year’s season finale at Homestead-Miami Speedway, Chase Briscoe won the Eldora Dirt Derby by mere inches over his ThorSport Racing teammate Grant Enfinger. The driver of the No. 27 Ford survived utilized a flurry of late-race cautions to put himself in position to ultimately pin Enfinger to the wall and take the victory by a slim 0.038-second margin.

Stewart Friesen, who many pegged as a favorite to win this race, wound up third after an early spin dropped him outside the top 25. Matt Crafton, who entered as the defending winner and Brett Moffitt rounded out the top five.

Noah Gragson, who started 27th after finishing second in the last chance qualifier and even dropped to the back of the field at one point, finished sixth. John Hunter Nemechek, whose beaten-up truck had lost fourth gear by the time the race began, wound up seventh. Logan Seavey, Justin Haley and Nick Hoffman rounded out the top 10.

Most of the early incidents were simple spins, but as the laps wound down, the intensity increased. After making it through the first two stages with just four cautions for on-track incidents, three of which were for simple spins, the final 20 laps were slowed by three yellows. The field ran just four of the final 23 laps under green flag conditions.

Johnny Sauter remains the point leader, despite a dismal night when he suffered an early spin and never could do much despite getting the free pass in stage one. He ended up 16th when the checkered flag flew and still holds a comfortable 32-point lead over Gragson. Moffitt remains third following a top-five finish, while Enfinger and Friesen round out the top five.

Who Should Have Won: Part of the beauty of Eldora is that so many drivers could win the race. Made up of series regulars to dirt racing standouts looking to make a splash and show the NASCAR world what they can do, at least half of that field was capable of winning the race. If not for the late yellow, Seavey would have cruised to an easy victory, and the same could be said of Stewart Friesen with a later caution.

The bottom line is that Briscoe was the one to capitalize on the opportunity when it rose during an overtime finish, so he’s the one that belongs in Victory Lane. Of course, it helps that he also led a race-high 54 laps and won his heat race earlier in the evening.

NASCAR fans may not have known the name Logan Seavey when the entry list for Wednesday night’s Eldora Dirt Derby came out, but dirt racing fans were familiar with him. In fact, Kyle Larson, who was a guest analyst for FOX Sports 1, named him earlier this year when asked about a driver in the lower ranks that deserves more attention than they’re getting.

“I would say Logan Seavey,” Larson told Jeff Gluck, “He’s done a really good job. I think he’s still relatively unknown to everybody here, but he’ll be the next Christopher Bell. So that will be really fun to see.

And Seavey didn’t disappoint. He took the lead at the beginning of stage three and didn’t look back, pulling out to a more than four-second advantage. But with less than 20 laps remaining, the yellow flag flew, tightening up the field. On the following restart, Briscoe got the jump on Seavey, putting the latter back in traffic to struggle with his truck before settling for an eighth-place finish.

“I just didn’t need those cautions,” Seavey said. “I thought we had a pretty good lead, and we were getting through lap traffic pretty good. That’s just how racing goes. You never know what’s going to happen at the end. We just kind of got eaten up after those restarts, and Chase (Briscoe) just beat me on the start. I spun the tires a little bit and everybody went by me after that.

“Overall, awesome race. I think we showed that we could run with these guys. I just didn’t anticipate the rubber laying down and having so much tire wear like we did.”

Based on his Eldora performance alone, it shouldn’t come as a surprise to anyone if Seavey ends up on the 2019 Kyle Busch Motorsports roster to pilot one of those trucks full-time.

Just a little more than a week before the Eldora Dirt Derby, Jordan Anderson Racing announced Monster Energy NASCAR Cup Series driver Ryan Newman would join the organization to pilot the No. 3 Chevrolet at Eldora Speedway. With backing from VRX Ryan Newman VR Experience/eSports and MotoShield Pro, the deal came together just a few weeks ago, and Newman spent time in the shop, working alongside the team on its setup.

“Dirt racing is part of where I came from; it makes up part of my roots,” Newman said leading up to the event. “Growing up in the Midwest and having raced there in the past, both in the Truck Series and in USAC competition, it’s certainly a special place. It’s going to be great going back to basics with what we’re doing, and his team’s grassroots approach, rolling into the racetrack with their dually and gooseneck trailer making the most of what resources we have and hopefully bringing them a win home.”

Fast forward to race day and Newman was 10th-quickest in the time trials before finishing second to Stewart Friesen in his heat race. Lining up 10th, the driver of the No. 3 Chevrolet hovered inside the top 10 for much of the race before he got caught up in an incident between Matt Crafton and Tyler Dippel that he was unable to avoid.

The right front damage was enough that Newman had to spend a long enough time on pit road that he went four laps down to the field. He ran the race to completion but was forced to settle for a disappointing 30th-place finish.

Points Update: Johnny Sauter (four wins), Brett Moffitt (three wins), Noah Gragson, Justin Haley and Ben Rhodes (one win apiece) all have their spots in this year’s playoff field. With just three races remaining, any driver with a victory will make the postseason.

Matt Crafton, who has the lowest points total of those currently in the playoffs and without a win this year, holds a comfortable 99-point advantage over teammate Myatt Snider, who sits below the cutoff line. At this point, it’s going to take a victory by a driver outside the top eight or an epic collapse by a driver who’s currently in for this year’s playoff field to change.

Up Next: The Camping World Truck Series heads straight to Pocono Raceway next Saturday night (July 28). Coverage for the Gander Outdoors 150 begins at 1 p.m. ET on FOX Sports 1; the race can also be heard on your local MRN affiliate or SiriusXM NASCAR Channel 90.

This is the only NASCAR touring series event I’ve watched the past two seasons. The racing was great. Michael Waltrip & Kenny Wallace (when he wasn’t talking about actually driving on dirt), however, reminded me of everything I hated about NASCAR on TV.

And who is bringing young talent into NASCAR with top equipment again? Kyle Busch, of course. He has the best eye for young talent of any team owner and he is the only active driver to give the young kids a shot in good trucks with good crews plus his own mentoring. It’s no wonder Erik Jones is ahead of the pack of young drivers in Cup – he has Kyle to mentor him, while the rest are left to founder with no leadership. Just another reason Kyle Busch is NASCAR’s Most Valuable Driver.

Another fantastic Eldora race. This has become a must watch on the calendar. Part of me wants dirt racing to stay special to the Truck series, but if big changes are coming to the schedule in 2020, then why not try Xfinity and Cup at Eldora. It would be the hottest Cup ticket since the heyday of the Bristol Night Race. A midweek Cup Eldora race would blow away the ESPYs.