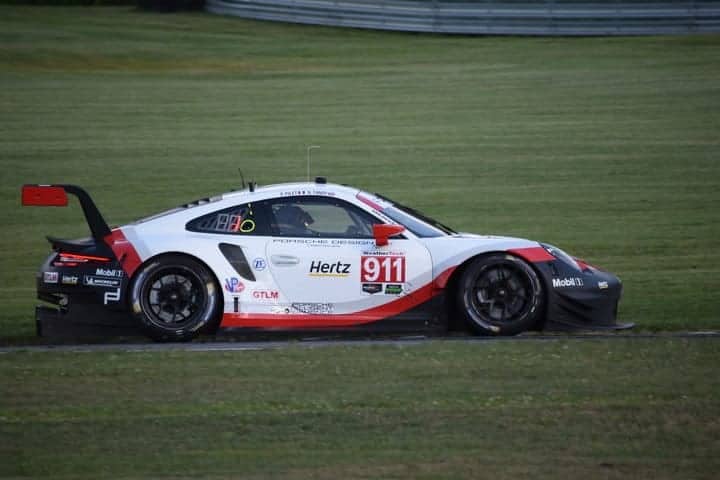 Porsche GT Team’s Patrick Pilet was fastest overall in IMSA WeatherTech SportsCar Championship practice Friday (July 20) at Lime Rock Park.  Pilet’s lap of 105.256 mph is not a class record, but it was significantly quicker than the pack.

In the morning session, Ford Chip Ganassi Racing IMSA’s Dirk Müller was fastest overall with a lap at 104.202 mph in his No. 66 Ford GT.  That lap was one-tenth of a second faster than Porsche GT Team’s Nick Tandy in the Porsche 911 RSR.  Ryan Briscoe in the No. 67 Ford GT was third quickest, followed by Earl Bamber in the second Porsche.  BMW Team RLL’s Jesse Krohn was fifth quickest in his Mission Impossible: Fallout-themed BMW M8 GTE.

GT Daytona saw 3GT Racing’s Kyle Marcelli set the best lap at an average of 101.555 mph in his No. 14 Lexus.  That lap was a mere five-thousandths of a second faster than Àlvaro Parente in the Meyer Shank Racing with Curb-Agajanian No. 86 Acura.  Magnus Racing’s Andy Lally was third in his Audi, followed by Turner Motorsport’s Bill Auberlen in his BMW.

Paul Miller Racing’s Bryan Sellers was fifth quickest, but that was about the end of his good luck.  Halfway through the session, unspent fuel in his Lamborghini Huracan GT3 sparked a fire in the rear of the car.  There was significant damage to the bodywork and internal workings of the No. 48 Lamborghini that necessitated an engine change for the point leaders.  As a result, Sellers and teammate Madison Snow were forced to miss the remainder of Practice No. 1 and all of Practice No. 2.

To bring home just how close the GT Daytona class was in opening practice, the 10 cars that will race (Wright Motorsports’ No. 16 Porsche was a late withdrawal) by less than one-third of a second.  This weekend’s race will likely be very competitive.

In opening practice, the two Corvettes were at the back of the GT Le Mans class.  A couple of hours later, Antonio Garcia put the No. 3 Corvette C7.R at the top of the time sheet with a lap at 104.172 mph.  While the lap was a little slower than Müller’s top time from Practice No. 1, it was nearly eight-tenths of a second faster than what the team managed in Practice No. 1.

Garcia’s lap was six-hundredths of a second faster than Joey Hand in the No. 66 Ford.  Laurens Vanthoor in the No. 912 Porsche was third fastest, followed by Richard Westbrook in the second Ford GT.  Pilet was fifth quickest.

Lally was fastest in GT Daytona with a lap at 101.772 mph.  At the time, it was an unofficial class record.  The lap was one-sixth of a second faster than Scuderia Corsa’s Gunnar Jeannette in the sole Ferrari 488 GT3 entered.  3GT Racing’s Dominik Baumann was third fastest, followed by Wright Motorsports’ Patrick Long.  Riley Motorsports’ Jeroen Bleekemolen was fifth fastest in his Mercedes.

The final practice of the day was held late in the afternoon.  Shadows were cast over parts of the 1.474-mile road course, cooling the track surface.  The cooler track temperatures allowed for faster speeds.  That is how Pilet turned a lap a full half-second faster than anyone did in the first two sessions to top the charts for the day with an unofficial GT Le Mans track record.

Unlike the earlier sessions, Pilet also didn’t keep it close.  His lap was nearly a half-second faster than Müller’s No. 66 Ford.  Krohn was third fastest in his BMW, while Vanthoor was fifth.  Corvette Racing’s Oliver Gavin was fifth fastest.

The session did not pass completely clean.  Early on, BMW Team RLL’s Connor De Phillippi spun his BMW M8 GTE at the chicane.  The car was not damaged and De Phillippi was able to continue.

In GT Daytona, Long was able to coax his Porsche 911 GT3 R to a lap at an average of 102.531 mph to top the sheet.  The lap is an unofficial GT Daytona track record.

Long’s lap was nearly three-tenths of a second faster than Meyer Shank Racing with Curb-Agajanian’s Lawson Aschenbach in the No. 93 Acura.  Teammate Katherine Legge was right behind in third, followed by Auberlen.  Riley Motorsports’ Ben Keating was fifth quickest.  After the aforementioned engine change, Sellers was sixth quickest.

Saturday will be a first for the IMSA WeatherTech SportsCar Championship.  The series will qualify and race on the same day, the first time that it has happened since the ALMS/Grand-Am merger.  Given the start time, Gianmaria Bruni’s GT Le Mans track record could very well be in jeopardy.  Qualifying is scheduled to take place at 9:35 a.m. Saturday morning and will be streamed live at both IMSA.com and FansChoice.tv.