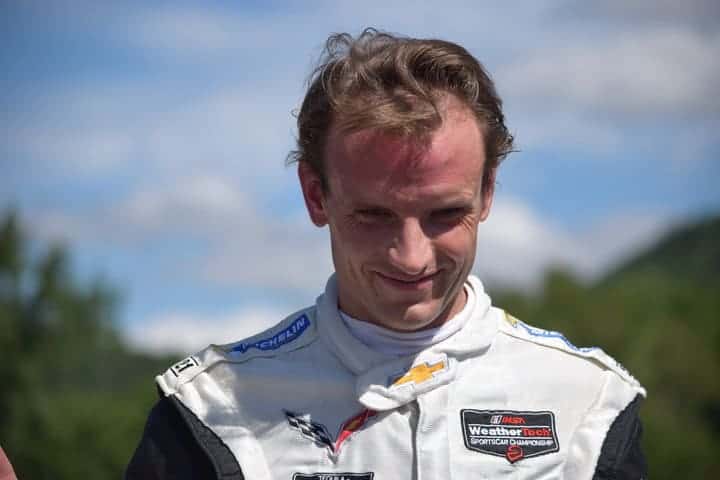 “It was really, really good,” Garcia told Frontstretch after the session.  “In [the warm-up], I did a low 50[-second lap], so I knew I had to go at least that or better.  I knew [that] I’d have one or two laps max [since] this track is very abrasive on tires.  We did the right thing building up the tire pressures [beforehand].  I think I truly nailed that lap.”

To give you an idea of the overall speed, the pole time is only seven-tenths of a second slower than the overall pole for this race in 2015.  In that race, the former Prototype Challenge class was the top class on offer.

Garcia’s lap was one-sixth of a second faster than Porsche GT Team’s Laurens Vanthoor in the No. 912 Porsche.  Ford Chip Ganassi Racing IMSA’s Dirk Müller will start third in his Ford GT with Corvette Racing’s Oliver Gavin alongside.  Richard Westbrook in the second Ford GT will start fifth.

Patrick Pilet was fastest overall in practice on Friday in the No. 911.  Unfortunately, his troubles started before qualifying did.  In the 15 minute pre-qualifying warmup, Pilet slid off and hit the tires in Big Bend.  The car was not significantly damaged, but the team had to rush to get it fixed for qualifying.  During the session, Pilet qualified at the back of the GT Le Mans class, nine-tenths of a second off pole.

In GT Daytona, the rapid pace continued to show.   Patrick Long provided a highlight for Wright Motorsports when he claimed the GT Daytona pole with a lap of 103.055 mph.  For a team that has had no luck all year and wrecked on the formation lap at the Rolex 24 at Daytona in January, every little bit helps.

Long’s lap, a new GT Daytona track record, was one-seventh of a second faster than 3GT Racing’s No. 14 Lexus driven by Dominik Baumann.  Teammate Jack Hawksworth got out late in the session and had the last five minutes to himself.  He was able to turn in the third fastest time.  Paul Miller Racing’s Bryan Sellers will start his Lamborghini fourth in class, while Scuderia Corsa’s Cooper MacNeil will start fifth.

The Northeast Grand Prix is scheduled to go green at 3:10 p.m. EDT Saturday afternoon.  The race will be broadcast via tape delay on FOX Sports 1 starting at 4 p.m.  The race will air fully, but delayed by about 55 minutes.