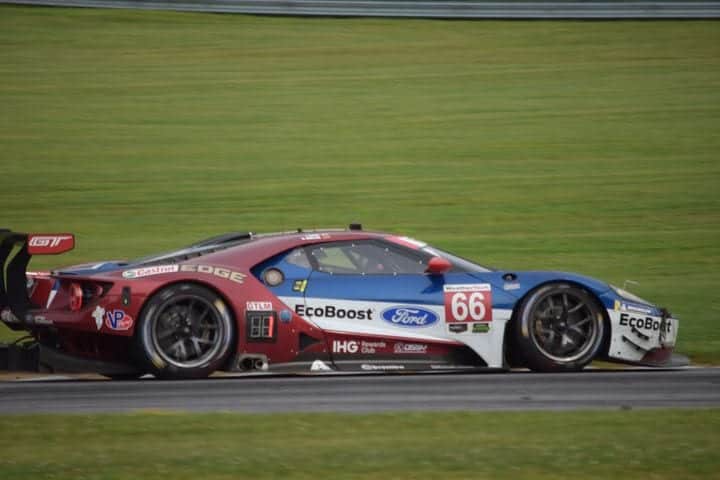 Corvette Racing’s No. 3 team dominated Saturday’s Northeast Grand Prix at Lime Rock Park.  However, Jan Magnussen mistimed a pass on Scuderia Corsa’s Gunnar Jeannette in the Diving Turn with 13 minutes to go and slid off-course.  That allowed Ford Chip Ganassi Racing IMSA’s Joey Hand to slip past and pull away to take the win.

It is the second win of 2018 for Hand and co-driver Dirk Müller and the fourth for Ford Chip Ganassi Racing IMSA.  In addition, the victory gives Hand and Müller the points lead.

“It’s just amazing,” Hand said after the race.  “We knew this race was going to be about being around at the end.  We knew tire longevity was going to be key here, and you have to be impressed with Michelin and our tires.  They went the distance when we needed them to because I was 12 seconds down there, and that set of tires, we were hard on them.  I could see I was reeling him in (No. 3 Corvette).  He was struggling in traffic and I was making some moves in traffic that were really aggressive, including getting in a full-on battle with the leading GTD cars.  It’s the last stint and you have no choice.”

Pole-sitter Antonio Garcia led from the green with Porsche GT Team’s Laurens Vanthoor hot on his tail.  It was rather difficult for Garcia to truly get away.

Ultimately, tire strategy was big.  Most teams were on a two-stop strategy due to the tire wear.  BMW Team RLL”s No. 25, started by Connor De Phillippi, attempted an unusual one-stop strategy since they didn’t have the speed on pace.  It didn’t work out as De Phillippi and Alexander Sims finished two laps down in seventh.

Garcia was able to hold onto the lead until his first stop one hour into the race.  Here, Magnussen got into the car.  A slower stop from the Porsche GT Team gave Magnussen a five-second lead.

In GT Daytona, Wright Motorsports’ Patrick Long was dominant early on.  Some of his competition didn’t see the end of the first lap, though.  Coming into the Uphill Chicane on the first lap, Meyer Shank Racing with Curb-Agajanian’s Lawson Ashchenbach and Turner Motorsport’s Bill Auberlen collided.  Neither driver spun, but both cars were significantly damaged.  Auberlen was unable to get his car back to the pits, bringing out the race’s one and only full course caution.  IMSA officials determined that Auberlen was at fault for the incident and assessed the No. 96 BMW a drive-through penalty.  The penalty was never served since neither car returned to the race.

Once the green was back out, Long began to drive away from the rest of the class.  Early on, the 3GT Racing teammates Jack Hawksworth and Dominik Baumann gave chase.  Unfortunately for Lexus fans, the RC F GT3 is rather hard on rear tires.  It did not take long for the teammates to drop back into the clutches of the rest of the class.

Hawksworth was able to keep himself in second until he made an early pit stop on Lap 40.  By that point, he was a full 20 seconds behind Long.  The stop was the first of three scheduled stops on the day for the No. 15.

Long continued to expand his lead until he stopped 51 minutes in to swap over to Christina Nielsen.  It appeared that the car lost something after that point as Nielsen was barely able to get within a half-second of Long’s early pace.  That allowed Paul Miller Racing’s Madison Snow to run down Nielsen and take second in class behind Hawksworth on his alternate strategy.  That became the class lead when Hawksworth made his second stop just before halfway.

Aside from the second main round of pit stops, Snow led the rest of the way.  The lead elevated up to as much as 28 seconds over Long once he got back in the car.  Magnus Racing’s Andy Lally was able to get past late and chopped a significant chunk of the lead away late as Snow backed off.  Regardless, Snow was able to hold on to give himself and teammate Bryan Sellers their second win of the season.

The margin of victory was 18.614 seconds over Lally and John Potter.  That result came despite Potter qualifying last and dealing with brake problems early on.  Scuderia Corsa’s Jeannette and Cooper MacNeil finished third, followed by Meyer Shank Racing with Curb-Agajanian’s Katherine Legge and Àlvaro Parente.  Hawksworth and Mario Farnbacher finished fifth with their alternate pit strategy.

Long ended up finishing a lap down in eighth after running third with 20 minutes to go.  What happened?  Tire issues.  Long explained in a tweet reply to Lally after the race.

Yea, you guys were hooked up and credit where credit is due. Our LR issue is something other than wear, but that’s water under the Lakeville river bridge. Great run.

A Stupid Race Report ! The Ford GT was easily running down the vette, and ready to pass and pull away as it did when the vette driver made a driving error……The FORD GT WON the race Fair and Square despite the continued Burden of BOP handicaps by the Pro-Gm (Nascar controlled) IMSA Rules dictators…….