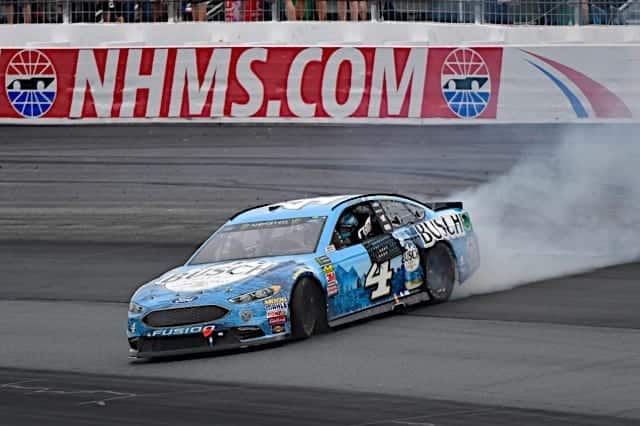 Kyle Busch and Kevin Harvick have been two of the best cars all season long. But for the first time all year, a race between them was decided by contact.

Harvick pushed Busch out of the way in the closing laps, surging ahead after applying a bump-and-run to win the Foxwoods Resort Casino 301. Busch wound up second, fading out of the picture after the No. 4 car pushed through to take control.

So Harvick nudged three, four, five times until Busch finally lost control and slid up the racetrack. From there, he cruised to his season-high sixth win of the year and first since Kansas Mother’s Day Weekend.

“We weren’t the best car on the long run,” Busch said. “It was going to be hard to hold him off, I was just backing up. I’m not sure he had to do it, but he did it, that’s fine. How you race is how you get raced.”

Both drivers seized an opportunity when Aric Almirola had a bad final pit stop. Almirola, who looked to be in control of the race, fought back to third but fell too far behind to make a charge.

“You think I’d be really excited to run top 5 and I’m not,” Almirola said. “We had the best car. There’s no doubt in my mind. We gave it away on pit road and I gave it away on the restart by spinning the tires.”

Martin Truex Jr. was fourth while Chase Elliott rounded out the top-five finishers.

Elliott, who entered the weekend near the playoff bubble, was happy about his refreshing run toward the front, where the No. 9 Hendrick Motorsports chassis earned its first stage win of 2018 and their best oval performance in months.

Anybody else tired of the same frigging drivers winning what seems like every race? And please, cut this big three crap. I tried, really tried to watch the second half of the race, but once again, I knew what the ending would. Sadly I was right. Long after changed channels.

I watched a recording of We Bought A Zoo. Given the actions of the animals in NA$CAR, I thought it was appropriate.

by checking qualifying the in the evening before the race, kind of know how the race is going to play out. same song, different day, different church.

next week might be a weather watcher for pocono and of course the same at the front.

I tried, but with the competition caution added to stage racing, endless commercials, unbearable commentary, I couldn’t take it….switched to TCM and watched an old Kirk Douglas movie. 105 degrees outside and 70 degrees inside, and still will not waste a Sunday afternoon watching it.