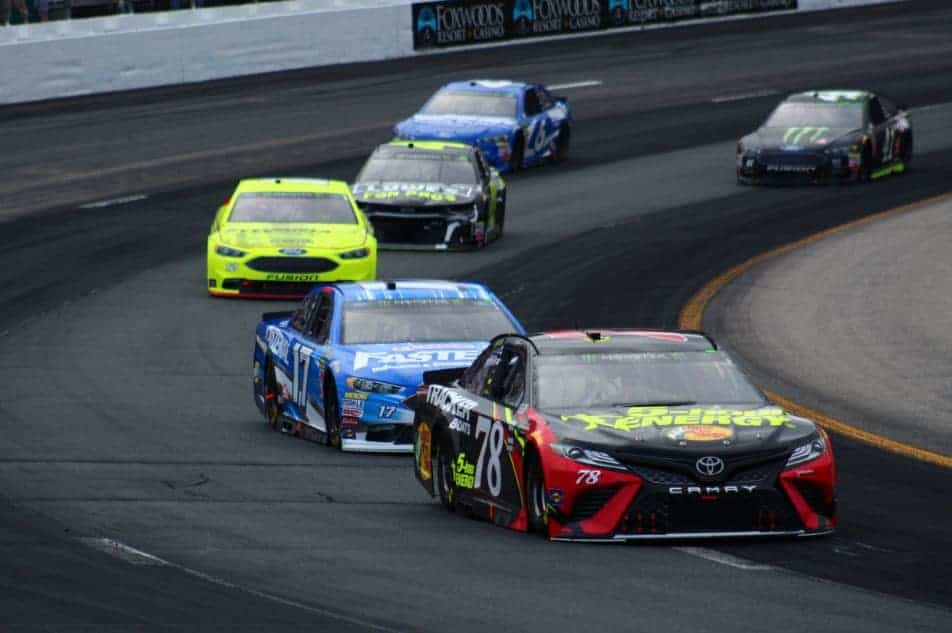 I’m sure you’re sick of hearing the words Big Three unless you’re a Kevin Harvick, Kyle Busch or Martin Truex Jr. fan. This trio, along with Clint Bowyer has won every points race this year outside of Daytona and Talladega.

But Sunday at New Hampshire Motor Speedway, they showed why they’re the best. Others threw haymakers right from the start of the Foxwoods Resort Casino 301. Kurt Busch led a race-high 94 laps, backing up a pole-winning effort. Chase Elliott had one of his best races this year and won a stage. Then, Aric Almirola took charge with 67 laps left and appeared on pace for his first victory with Stewart-Haas Racing.

But to beat the Big Three, you need to be on your game the entire race. You also need the whole team clicking behind you and that’s exactly how victory fell through for the “other” contenders. Almirola and Busch were doomed by pit road and Elliott? He fell just a small step behind with adjustments. Meanwhile, Harvick and Busch surged to the top on the back of strong pit stops and quality communication with their crew chiefs. It’s clear in Harvick’s case SHR’s crew changes worked best this weekend for the No. 4. They stepped up along with Busch’s team, one of the sport’s best on pit road who came to play during the final caution period.

That meant on the restart, after some up-and-down days who were 1-2-3 with 35 laps to go? Why Busch, Harvick and Truex, of course. The first two wound up rubbing sheet metal for the win while the No. 78 led more laps than both of them combined (83) and came home a strong fourth.

In the end, Harvick prevailed, a little bump-and-run with Busch putting the exclamation point on his series-best sixth victory of the year. That also means the merry-go-round continues between them on top of the charts: it’s gone Truex-Busch-Truex-Harvick the last four unrestricted races (Daytona excluded). Others may be trying their best but this wall of brilliance the Big Three has constructed is one tough nut to crack. – Tom Bowles

Whenever Brad Keselowski enters a NASCAR XFINITY Series race, he’s one of the favorites. Hell, heading into New Hampshire, he had three consecutive victories, dating back to Richmond Raceway last September.

But, with final MENCS practice running long, he and BJ McLeod were late to the driver’s meeting. That meant the No. 22 car would be sent to the back after winning the pole earlier on in the day. Obviously, Keselowski’s run through the field was going to be fun to watch.

It was also a whirlwind, taking less than 45 laps for Keselowski to crack the top five. Meanwhile, Christopher Bell dominated the opening stage, holding off Joe Gibbs Racing teammate Ryan Preece for the playoff point.

That’s when the No. 22 crew gained four positions on pit road, awarding Keselowski the top spot. He went on to win stage two and set himself up for yet another victory.

Why didn’t he get it? The final stage is where the day got wild. There were multiple late-race incidents allowing for chaotic restarts. With less than 30 laps to go, John Hunter Nemechek bumped Bell past the No. 22 car, where the No. 20 team looked to be in prime position to capitalize on back-to-back victories.

With five laps to go, Keselowski was in hot pursuit after Bell, closing the gap on the rookie driver. However, he overran Turn 1 with two laps left, triggering the No. 20 to pull away for his second consecutive victory and third of the season.

Keselowski finished second, while Preece, Nemechek and Matt Tifft, who had a standout performance, rounded out the top five. And in denying a MENCS regular, Bell took the next step in his quest for an XFINITY championship. Will his turn at the Cup level be a 2019 reward? – Dustin Albino

It could be a mid-week race or it could be running NASCAR on a dirt track. Either way, the Camping World Truck Series’ sixth annual visit to Eldora Speedway delivered exactly what NASCAR needed Wednesday night.

The day began with a departure from the normal qualifying process. Time trials set the fields for five heat races, each of which set the top-25 starting positions. The last-chance qualifier sent two drivers into the field while five others made the race using owner’s points ahead of the feature.

The heat races were exciting enough with drivers not guaranteed a spot pushing hard to make the field. That was the case even without all 32 trucks on track. Fast forward to the feature and you got the perfect amount of beating and banging, dive-bombs and a few slide jobs.

The race was full of comers and goers, and as the laps wound down it appeared a driver making his debut, Logan Seavey, might sail to the win. But the cautions that flew late tightened up the field three times in the final 20 laps. It left teammates Chase Briscoe and Grant Enfinger literally bouncing off each other en route to a photo finish that saw Briscoe narrowly take the victory.

Perhaps what was most important is the racing was so captivating, most of the broadcast was devoid of the words points, playoffs and championship. That’s not to say that the championship isn’t important. It clearly is, but it’s refreshing to have a race without mid-November as the central focus.

Eldora is gold every season (literally, if you consider the golden shovel trophy). It’s a track that belongs on the Truck Series schedule until the series ceases to exist. – Beth Lunkenheimer

NHRA: Kings and Queen of the Mountain

NHRA kicked off its Western Swing with the Dodge Mile-High Nationals from Bandimere Speedway outside of Denver, Colorado this week. The podium featured one Woman of Power, two venerable series veterans and one 200-mph, two-wheeled powerhouse.

“Our crew has really impressed, attitude of gratitude, as high as the altitude here,” said Pritchett. “They chipped away at it and didn’t let themselves get down earlier this year when we were in a slump and they didn’t let me get myself down in a slump either. I always have my confidence in them and they have their confidence in me and this weekend, we pulled it all together.”

“I found myself with all the crashes and everything that happened probably at the lowest point in my career. It has been worse than when I crashed in 2007,” Force said of his recent slump. “I had to beat a lot of great racers today. Hagan, Cruz, Capps. I love them all. My fire was in me.”

Force also got by Matt Hagan, Cruz Pedregon and his daughter, Courtney Force, en route to the finals.

Pro Stock featured a Summit Racing matchup as teammates Greg Anderson and Jason Line squared off in the finals. Give it to Anderson, who scored his 91st Pro Stock win, running 6.943 seconds at 196.53 mph to best Line’s 6.947 seconds at 196.19 mph. Anderson now trails Warren Johnson, who has 97, by just six wins for the most in Pro Stock history.

“We have had a heck of a battle this year, we have had great running cars but we have made mistakes on Sunday and haven’t been able to close the deal,” said Anderson. “The class is so tough right now, it is so hard to win. The bottom line is we haven’t put forth our best effort on Sunday, we haven’t lost giving it our best shot and today we did.”

Pro Stock Motorcycle featured a final between Jerry Savoie and Hector Arana Jr. that saw both drivers commit a redlight foul on the start. Per NHRA rules, Arana’s -.002 was less of a foul than Savoie’s -.004 so Arana was ruled the victor.

He also defeated Ryan Oehler, LE Tonglet and Andrew Hines to make his way to the finals. – Toni Montgomery

ARCA’s scheduled 200-lap race at Berlin Raceway has been rescheduled for August 25 following constant rain all day Saturday in Michigan. Points leader Sheldon Creed will now take his advantage onto Pocono Raceway for the series’ second visit in 2018 to the Tricky Triangle, scheduled to go off this Friday.

Formula One: The One That Got Away?

Anyone who watched the Formula 1 Grand Prix of Germany this weekend would never have expected Lewis Hamilton could win the race and that his series rival, Sebastian Vettel, would be out when he skidded off the road at Sachs Curve. Vettel not only lost his lead in the driver’s championship but his Ferrari team now trails Hamilton’s Mercedes squad in the constructor’s title.

It’s true that it’s only the midway point of the season; there are many races to go. But this event could prove to be a turning point in what’s been a year-long battle.

Vettel held a comfortable lead most of the race until his tires began to have problems. In certain parts of the track, where the water had still not evaporated, he miscalculated. If Hamilton ends up winning the championship in November, this race might have been the one that got away from the German.  – Mark Gero

In reality, the Duqueine squad of Nicolas Jamin, Panciatici and Pierre Ragues dominated, leading 114 of the 160 laps.  They just ended up on the wrong pit strategy.

G-Drive Racing made its final stop 13 laps earlier, then benefitted from a full course yellow for debris.  When Panciatici made his final stop, Vergne was only a couple of seconds behind.  As a result, Panciatici came out of the pits more than a minute behind.  Despite Vergne having to stop for a splash of fuel late, he still held on to win by 19 seconds on the road.

After the race, all the cars submitted to post-race inspection, as is the norm.  That inspection includes the taking of fuel samples and the one taken from the Duqueine Engineering’s ORECA 07-Gibson did not conform to regulations.  As a result, the runner-ups were disqualified from the race, promoting the Racing Engineering ORECA 07-Gibson shared by Norman Nato, Paul Petit and Olivier Pla to second. – Phil Allaway

I see where the fan`s requests to stop the references to the big three has fallen on deaf fingers.