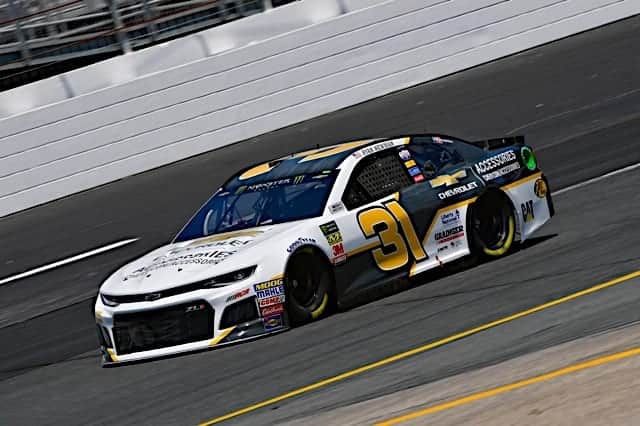 New Hampshire Motor Speedway has always been one of Ryan Newman‘s best racetracks. In Sunday’s Foxwoods Resort Casino 301, he got his season back on track.

The No. 31 car took the green flag from 18th starting position, and remained in the mid-teens through the first half of the race. At the end of stage one, Newman had gained just one position to 17th. By the end of the second stage, he had climbed just two additional positions to 15th.

However, the final stage is where the No. 31 team shined. Besides driving up to the back half of the top 10, it was a pit stop with 44 laps to go that put Newman in prime position to strike as the closing laps drew near.

“The guys did a nice job in the pits today, so that was nice to see,” Newman said after the race. “I’m proud of everybody. It’s not the end result that we want, but it’s a huge improvement and that is something we want, so we’ll keep digging.”

Newman came out of the pits eighth on that final stop, which put him in the outside line, the preferred line on restarts. Coming out Turn 2 and down the backstretch, the No. 31 car slotted in fifth, behind the “Big Three” and Chase Elliott, who had led 23 laps earlier in the race.

As the race came to a close, Newman lost just one position to Aric Almirola, who drove up to third. Newman took the checkered flag in sixth, a season-high for the No. 31 car.

“Confidence hasn’t been one of my weaknesses,” he said. “It’s a good team effort. The guys did a good job in the pits. We fought hard, kept our nose clean and got a couple good restarts , but track position is so huge here. Once we were up there, we were able to hang on to it.

“The pit stops definitely helped, and so did the restarts. If you put those things together you can have a good car and a good finish because most of the cars are probably even.”

Coming into the race, Newman sat 19th on the playoff grid, which he remains. But with Paul Menard and Ricky Stenhouse Jr. having challenging days, along with Alex Bowman finishing outside the top 10, the No. 31 car gained a handful of points, now 74 markers out with six races remaining until the playoffs begin.

The Cup Series heads to Pocono Raceway next week where Newman finished 25th in June. However, he does have one prior victory at the track.

“We’ve just got to do better than we did there last time,” Newman mentioned. “We had a good qualifying run, but struggled in the race, so we’ve got to figure out our weaknesses.”