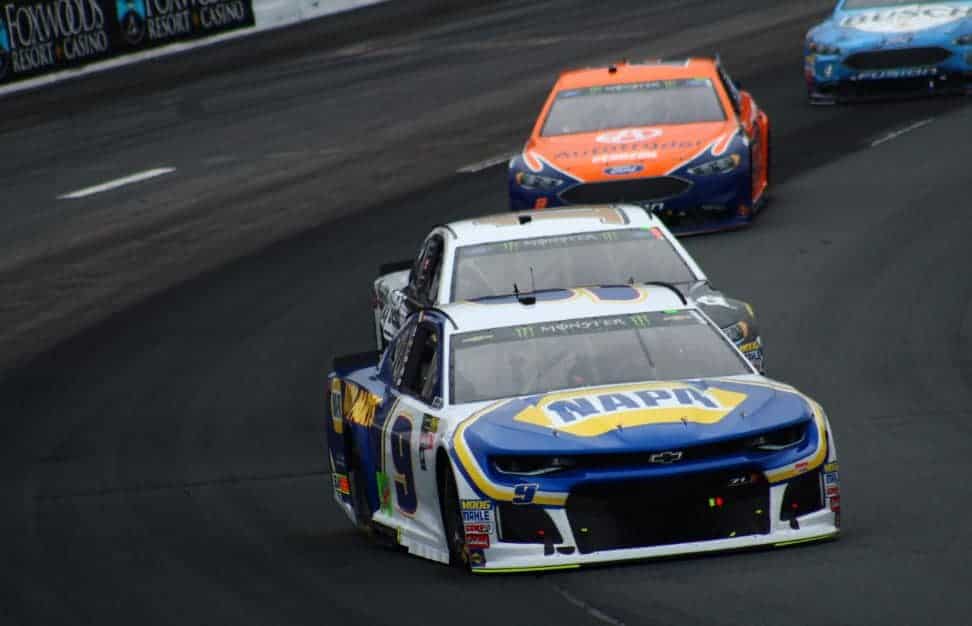 Sure, he didn’t win; in fact, Kurt Busch was lucky to scrounge up eighth after tumbling late in the race following a bizarre green-flag pit sequence where he got caught up with Ryan Blaney. Busch stopped before his pit box, thinking Blaney was done with his service but wound up waiting for him to leave instead. That few extra seconds proved costly at a New Hampshire Motor Speedway oval where track position is key.

He comes to a stop thinking @Blaney was going to exit after being serviced! pic.twitter.com/Ym6o0hUoVx

“Pit road, once in 1,000 years that’s gonna happen,” Busch said. “We just shouldn’t have pitted on that lap.  Blaney is a good kid.  He wanted to let me go, but then I would have blocked him in.  I was like, ‘No kid, go.’  That just turned into a total disaster.”

That was it for the Monster Energy NASCAR Cup Series pole sitter; a bad restart after the race’s final caution knocked him outside the top 10 at one point. But Busch, who’s been a step behind Kevin Harvick and Clint Bowyer on the totem pole at Stewart-Haas Racing, has to be happy with the speed he’s flashed lately.

The past two weeks, Busch has led 139 laps and could have won either race if circumstances tilted his way. While Harvick won, people knew Busch was there, and he’s got some good tracks coming up. Two of his last three wins have come in the No. 41 car at Pocono and Michigan.

Maybe you need a raging downpour at New Hampshire every year? This rain-delayed race was well above average for a racetrack that just lost one of its Cup dates. Aric Almirola, Chase Elliott and Kurt Busch made their presence felt in a race with several twists.

But given the opportunity, in this case a late caution for Bowyer’s wreck, NASCAR’s Big Three keep finding a way. Problems for Busch and Almirola on pit road opened the door; the perfect pit stops of Kyle Busch, Kevin Harvick and Martin Truex Jr. busted right through it.

For most of the last 30 laps, that trio was 1-2-3 until Almirola fought back to third place late. While Busch and Harvick locked bumpers to settle the win, no one else came close. The rest of the MENCS still has their work cut out for them to catch up.

Where… did Hendrick Motorsports come from?

NHMS hasn’t been a great track for the Hendrick Motorsports group. Jimmie Johnson hasn’t won here since 2010; last fall, none of the HMS drivers ran better than 11th. The last time this organization reached Victory Lane here was 2012 with Kasey Kahne.

Add in a winless, mediocre 2018 season in which no one can figure out the Camaro and, well, no one was expecting much on Sunday (July 22). But could this race be a turning point for the four-car operation? Elliott looked like he was shot out of a cannon early on. Leading 23 laps, he won a stage and flashed consistent speed throughout. A fifth-place finish was easily his career best here.

The rest of the HMS group wasn’t far behind. Johnson ran top five early in the day, collected 11 stage points and wound up 10th. Alex Bowman bounced back from a disastrous last-place finish at Kentucky Speedway to claim 11th. Even rookie William Byron, suffering through a rocky summer, wound up 14th.

When… will Aric Almirola get over the hump?

Sure, Almirola was frustrated after feeling like he gave away the race. His healthy lead was wiped away through an untimely caution, pit crew fumbles and an ugly final restart. After so many near misses it’s clear oh-so-close is not-so-acceptable anymore for him. Even his teammates are feeling bad for Almirola’s poor luck.

Sick to my stomach. Feel terrible for @Aric_Almirola. Had something broke on LR and was nursing it to finish and then the RR broke getting into corner. It never got any worse so I figured it was just a shock mount broke or something and would be fine. SHIT!!!!!!!!!!!

“I’m so disappointed,” Almirola added later on Twitter. “I know we had the best car today, but we didn’t execute. Our time is coming. We have fast Fords capable of winning week in & week out & we will get to Victory Lane sooner rather than later.”

I agree with that assessment 100 percent. The No. 10 team, when they look back, will realize Sunday was still a big step. Many times this season (Richmond comes to mind) Almirola had the fastest car only to adjust himself out of contention. Despite a long list of top-10 finishes this team wasn’t keeping up with the track over time as well as the rest of SHR.

But New Hampshire was different. It was a slow, steady climb up the ladder where Almirola peaked when it counted most. That’s what you need in order to win races. The ability to finish will come.

My guess is Richmond this fall; it may come a bit sooner. But expect Almirola to get over the hump in 2018.

Why… did Kevin Harvick knock Kyle Busch out of the way?

It was clear in the final laps at NHMS Harvick had a faster car than Busch. He was stalking the No. 18 Toyota’s rear bumper for several laps. There were six laps left for him to pass the leader the hard way.

So why execute a bump and run?

For me, that explanation doesn’t hold water. There was no way third-place Almirola was going to catch these two. Harvick’s nickname, “The Closer,” also tells you what you need to know about him finishing races. This six-time 2018 winner would have figured out how to get by.

So why push it? I think Harvick was sending Busch a message. For the record, Busch handled it with class; no temper tantrums, only careful comments. But Busch did say “how you race is how you get raced.” So there’s enough agitation there (and a clear incident) where Busch can play an eye for an eye going forward.

I just thought for Harvick, poking the bear was unnecessary. Why bump a guy out of the way who will clearly get you back if you’ve got the faster car? If Busch spins Harvick out down the road, in particular a playoff race we’ll look back to this moment and wonder… was it worth it?

How… is the playoff picture shaping up with six races to go?

Bowman’s big rebound provided some clarity in NASCAR’s postseason race. He now leads Ricky Stenhouse Jr. by a healthy 28 points with six races remaining. A surprising Paul Menard sits 29 back and may be the bigger threat considering the Wood Brothers’ strong alliance with Team Penske.

One other driver, Ryan Newman, can’t be counted out. He sits 74 behind with six races left but a few more sixth-place runs like Sunday and he’s got a chance. Other than that… I think everyone else has to win. At 94 points back, Daniel Suarez would need a minor miracle to get in on points.

On the flip side, strong runs by Elliott and Johnson leave them fairly safe. They’re both up by nearly 100 points on Stenhouse and would need a few DNFs to feel uncomfortable. The only wild card would be if someone like AJ Allmendinger or Jamie McMurray won at Watkins Glen. Then, they’re on the cutline battling Bowman for that final spot although the gap is still sizable (67 and 69 points, respectively).

But in all likelihood, we’re down to four drivers fighting for one spot. Can Bowman hold on?

Tom, I couldn’t disagree with you more about Harvick moving Busch out of the way. Harvick did exactly what Busch would have done to him had the roles been reversed. Hell, it’s what he did to Larson a week or two ago. And if Busch moves Harvick out of the way later in the season, I can guarantee you it won’t be payback, it will just be Kyle racing the way he races, and it won’t matter one bit how Harvick raced him yesterday.

Bowyer wreck? He barely tapped the wall, and of course because it was Almirola leading and not one of the chosen ones, Nascar can’t throw the yellow fast enough, even though Bowyer could have easily made it to pit road. He got screwed, which put him in the position to make mistakes.

Calling Harvick the “Closer” is laughable. Its a name DW made up that has no credibility. How many 2nd place finishes did Harvick have last year? Please. He’s hardly the closer. But then again, its not hard to close out races when you can bump people out of the way and get away with it every single time. But I will say, given who the guy was he was trying to pass, why bother trying to get by him clean when you know if the roles were reversed, he wouldn’t think twice about bumping you out of the way, regardless of the circumstances, so I can’t blame him for doing it.