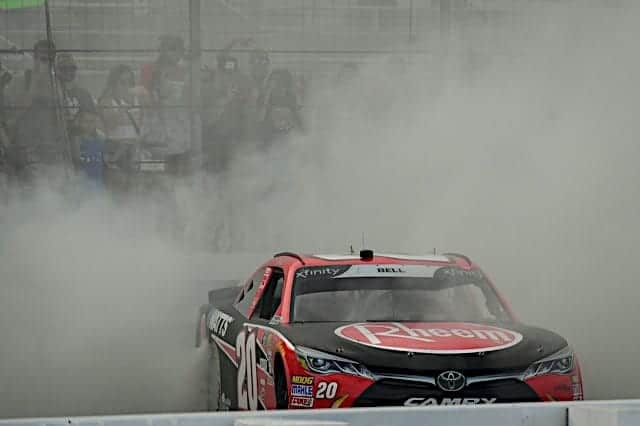 Once Brad Keselowski was sent to the back at the start of the race for being late to the drivers meeting, Christopher Bell put on a show in stage one. That continued, all the way until the checkered flag flew.

On a restart with less than 30 laps to go, Keselowski was the control car. However, Bell got a shove from John Hunter Nemechek shooting him to the lead, which he held onto en route to his third victory of 2018.

As the run went on, Bell and Keselowski played a cat and mouse game — Bell would pull away, then Keselowski drew closer. Entering Turn 1 with two laps to go, the No. 22 overshot his marks, allowing Bell to continue on easily for the victory.

“I don’t know if it’s fun, but it’s stressful, that’s for sure,” Bell said of holding off Keselowski. “He [Keselowski] on tires there, he didn’t have left sides and we had four, so that was a big advantage for me and I was able to get a really good launch on the restart, so, you know, that was really the key there. I think he had a little bit better car than us, but pretty much all through practice we were really equal.”

Whenever Ryan restarted on the bottom, he put on a show, specifically off Turn 2, when he hooked the No. 18 Toyota under the yellow line. It netted him plenty of positions and even awarded him the lead for six laps.

And @CBellRacing is back out front! pic.twitter.com/zaONLBbq19

The preferred groove to restart in at NHMS is the outside — we saw it in the Modified race, as well as the XFINITY event. But if a team can hook its car up under the yellow line, it’s dangerous for the competition, because after all, it is the shortest way around the track.

On the final restart of the race, Nemechek shoved the hell out of Bell to get him the lead. With the shove, Nemechek got the No. 42 car up next to Brad Keselowski, attempting to take the second position away. The move failed, but he still finished fourth, his second XFINITY Series top-five finish.

New Hampshire isn’t a track that’s known for being hard to get on to pit road. Jeremy Clements put that to the test with 33 laps to go.

During a cycle of green flag pit stops, Clements had yet to visit pit road, along with Ryan Reed and Ryan Sieg. However, when he attempted to bring the No. 51 Chevrolet down pit road, Clements was carrying a bit too much speed, though he made it under the commitment box. As he slammed on the brakes, the car slammed into the sand barrels at the end of pit road.

It’s the return of a classic … Red flag in New Hampshire. pic.twitter.com/haoslBGXho

In the past, water was out billowed out from the yellow barrels, but now it’s sand, as well as the speedy dry NASCAR helps clean the track up with after an oil spill. This red flagged the race for over 7 minutes and 30 seconds.

Some of the past miscues with drivers getting to pit road include Matt Kenseth driving up the water barrels at Dover International Speedway in 2004. Most recently, Jeffrey Earnhardt smashed the sand barrels at the Monster Mile in the fall of 2017.

Despite bending up the left front of the No. 51 machine, Clements chugged on to finish 18th.

On lap 79, running around 20th, Chastain drove the No. 4 car hard into Turn 3, charging the corner. When he dove off into the flat corner, the Chevrolet wheel-hopped, backing into the outside wall.

“I made a mistake, just driving over my head trying to get too much,” Chastain said after a 26th-place finish. “I’m trying to drive as far to the limit of the car that I can and I keep stepping over the line. It definitely cost us today, and I can’t take that back now.”

Will this tighten up the battle for the final playoffs spot? pic.twitter.com/V3JV7Hcld6

After 12 of 18 races this season, Chastain has been a part of the playoff grid, typically seeded as the bubble driver in 12th. Heading into Saturday’s race at New Hampshire, he had a 40-point cushion on Michael Annett for that final position.

Though Chastain finished a disappointing 26th, Annett only gained 10 points after finishing 16th. With eight races remaining in the regular season, the underfunded JD Motorsports team has a 30-point cushion over the money hungry JR Motortsports juggernaut.

“I feel the pressure to beat guys and the guys I’m trying to beat and to prove this team is as good as we think we are,” Chastain mentioned. “It’s no different than I’ve always been. We shouldn’t even be a part of the playoff deal, so it is what it is. I’m really glad that we are and this doesn’t help, but I’m just trying to drive the car as fast as I can.”

The series heads to Iowa Speedway next weekend where Chastain has a career-best finish of fourth last June.

When Tifft made the jump to Richard Childress Racing at the beginning of 2018, he hoped for days like this one. Saturday was arguably his best race of the year finishing fifth, though he ended up fourth at Richmond Raceway in April.

Tifft began the event in 14th, one position lower than his average starting spot of the season. As the race progressed, so did the No. 2 Chevrolet.

By the end of lap 45, Tifft had raced up to ninth, earning two stage points. Throughout the second stage, he remained among the top 10, placing 10th in the final stage after a jumble of pit strategy.

When stage three began, Tifft’s goal was to get as high as he could. On the final restart, the No. 2 car drove up to fourth, before falling to fifth when the checkers waved.

“It’s good to be back up here where our speed has been, it’s just capitalizing on our mistakes all day long,” Tifft said. “The biggest thing all season long is we’ve felt like we’ve had the speed, just maximizing our speed and carrying it over from practice to qualifying to the race. It was a good recovery from where we’ve kind of struggled with that.”

This is Tifft’s second top-five finish of the season and first top-10 finish since Iowa five weeks ago. Currently, he sits ninth on the playoff grid and believes his No. 2 team is heading in the right direction.

“This is a good weekend for learning of what we need for staying up with the track and that’s great moving forward,” he said. “Richmond and here were definitely good weekends for us. I feel like we capitalized both weekends, but certainly, for a track that I didn’t get the finish I wanted to last year, it was great to get a good run.”

Keselowski put on a show, coming from the back of the field to fifth at the end of the first stage. His pit crew got the No. 22 Ford out first on pit road after the stage one break, and it looked like it was going to be the Brad K Show, but ultimately the competition caught up.

Austin Dillon finished 10th, though he spent approximately 90 percent of the race outside the top 10, and was, by far, the worst Richard Childress Racing machine. The other two double-duty drivers, both competing for JD Motorsports had tough days; Chastain (26th) and BJ McLeod (35th).

“I’m proud of the heart of this team, finishing 12th after running around 18th-20th most of the day.” – Ryan Reed

“We sped on pit road, had to come back through the field and did so, but just got tangled up the last lap, the last corner and tore up a lot of stuff.  It’s just unfortunate.” – Austin Cindric

This was the best XFINITY race at New Hampshire in recent memory, and the first time a series regular won since David Green in 2003. It’s always cool when an XFINITY driver goes out and beats a Cup driver heads up, and that’s exactly what Bell did.

Bell is on a bit of a roll, and now sits second in points to Daniel Hemric with eight races remaining in the regular season.

The series returns to Iowa Speedway next weekend for the second time this season. Justin Allgaier dominated the first event five weeks ago, leading a career-high 182 circuits. Preece goes into the race as the defending winner, which was first NASCAR national touring series victory.